I Suffered Anti-Semitism In Poland. Why Won’t Netanyahu Condemn It? 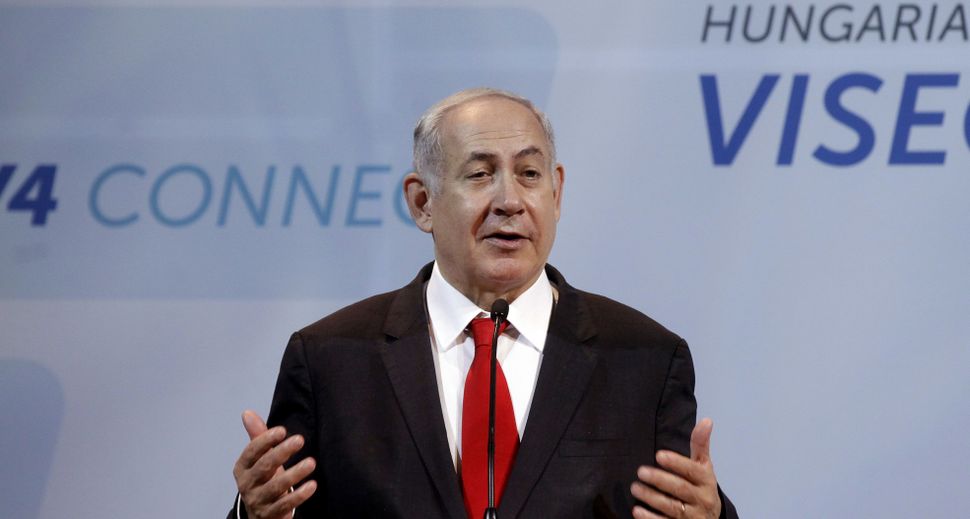 The Israeli Foreign Ministry held its sixth annual Global Forum for Combatting Anti-Semitism this week in Jerusalem. As part of the event, Natan Sharansky, the Soviet refusenik turned Israeli politician, made a bold claim against a growing problem.

“There are those who would want to make common cause with far-right, racist parties in Europe because they now profess support for Israel,” Sharansky said. “Just as those who claim to love Jews but hate Israel cannot be considered friends of the Jewish people, so too those who say they love Israel but are opponents of the local Jewish community are equally enemies.”

Sharansky’s ethics are sorely needed at a time when the people he’s subtly criticizing rise straight to the top of Israel’s ruling coalition government. All too often, we’re seeing Jewish leaders and Israeli politicians make common cause with far-right parties. These parties are on the rise throughout Europe, from France to Germany to Poland — where I recently lived for half a year.

In Poland, the ruling Law and Justice (PiS) party has solidified its power on a platform of xenophobia. Most recently, it codified this agenda in the “Holocaust bill,” as I’ve written about in these pages. The bill is famous for criminalizing the phrase “Polish Death Camps” to refer to Nazi concentration camps, and anyone who confers guilt for war crimes upon the Polish nation or people could face up to three years in jail.

The bill reflects a broader belief underlying contemporary Polish politics: We were the victims of Nazi and Russian aggression, and so we could not have victimized the Jews. And it’s part of a worrying rise of anti-Semitism throughout Poland, which the PiS party has capitalized on.

The law reflects a deep-seated cultural anti-Semitism in Poland, which Polish sociologists wrote about in this 2017 study. But what should shock the Jewish community most is the long-standing collaboration between the ruling Polish party and the Israeli government under Prime Minister Netanyahu.

For years, Netanyahu has made common cause with far right leaders. And even when the Polish Prime Minister Mateusz Morawiecki called Jews “perpetrators” of the Holocaust, all Netanyahu could muster was an anodyne statement of his intent to speak to Morawiecki.

For someone who speaks as the defender of the Jewish people, Netanyahu holds a selective stance towards anti-Semitism. He’s quick to call it out when it comes from Iran, but unbearably quiet when it comes to the global far-right.

As an American Jew living in Poland, I lived the reality of the PiS party and the anti-Semitic culture it has enabled in Poland. During the ultra-nationalist November Independence Day march, I hid from torch-wielding marchers. And when I wrote about my fear, I was threatened for speaking out. With the Holocaust bill’s introduction and its promise to criminalize speech, I felt silenced. I refrained from publishing or posting any criticism of the law, and became wary about mentioning my Jewish heritage in public.

I had come to Poland with a desire to live Jewishly beyond the cultural and geographic bounds I’d grown up in. As a secular Jew in New York, I had never felt ostracized or marginalized for my religious identity.

Unfortunately, while in Poland, I saw first hand that anti-Semitism still exists.

There is an overwhelming sea of nationalism and xenophobia that’s impossible to ignore. You can feel it during protests — as in the November march pictured below that brought out 60,000 — and in the white power and anti-Semitic graffiti appearing throughout the capital.

Anti-Semitism regularly appears in the media too. Catholic Priest and editor-in-chief of the weekly Tygodnik Idziemy claimed on state TV that for the Jew, “truth means something that conforms to his understanding of what’s beneficial.” And anti-Semitism is regularly displayed on newsstands. The weekly paper Angora featured a hook-nosed Jew on its cover, and another, Do Rzeczy, spread the virulent belief (“Żydo Komuna”) that Jews collaborated with the Communist regime after World War II to take advantage of Poles and to steal their property. I attended a Polish-led Holocaust commemoration week, where remembering Poland’s former Jewish population turned into Jews thanking Poles for saving their ancestors.

As a Jew walking the streets of Warsaw, I didn’t feel outrage at these episodes. I felt terrified, as Jews must have throughout five hundred years in Poland. In my first piece for the Forward, I described my fear as a Jew hiding from chanting marchers as flash-bangs went off outside my window.

And yet, throughout all this, there was no word from Netanyahu condemning the rising anti-Semitism.

Soon after the march, the government came out with its bill. The response from Israel was swift. The Knesset voted almost immediately to pass a bill that would consider Poland’s bill tantamount to Holocaust denial.

Netanyahu, too, was outraged, calling the bill “baseless” and affirming “the Holocaust cannot be denied.”

And yet, Netanyahu has praised and collaborated with the Law and Justice party since its ascension in 2015.

In 2016, Netanyahu commended Poland for its “resolute stand against the resurgent anti-Semitism that we see in parts of Europe.” And Israelis with connections to Netanyahu have formed ties with the most reprehensible parts of the Polish government and society. As Larry Cohler-Esses has described in these pages, the current crisis in Poland comes after years of public engagement and endorsement of the ruling party by the British-Israeli Jew Jonny Daniels, who has ties to both Netanyahu and Donald Trump. Daniels has aligned himself with the most virulent anti-Semites of the Polish Catholic establishment and himself contributed to anti-Semitism in the press, for example, by warning Poles that “leftist Jewish media continue to attack Poland” and that “they profit by doing so.”

But it should be no surprise that Netanyahu associates with the likes of Daniels. the Prime Minister of the Jewish state has been woefully silent as talk of “globalist” Jew Gary Cohn comes from the mouth of none other than US President Trump. Meanwhile, in 2017, Netanyahu traveled to Budapest to meet with the Visegrad group, an illiberal alliance between Poland, Hungary, the Czech Republic, and Slovakia. While there, he played into the group’s anti-EU stance, criticizing the Union’s position towards Israel on an accidentally switched on mic. He also gave cover to Hungarian Prime Minister Victor Orban, calling Orban’s promises to address anti-Semitism “important words” amid that leader’s explicitly anti-Semitic smear campaign against the Hungarian-born George Soros. Netanyahu even assumed some of Orban’s positions, blaming Soros for the demonstrations against his own decision to deport African migrants from Israel.

For the leader of the Jewish state who claims to represent all Jews, this is reprehensible. As Sharansky so eloquently put it, those who say they love Israel but are opponents of the local Jewish community are our enemies.

Living in Poland I felt the need for the Jewish state in a way I never had in America. I sighed with genuine relief upon landing at Ben Gurion on the Warsaw-Tel Aviv flight.

And so it is personal when I criticize the prime minister of Israel and implore him to do more, to set aside realpolitik in favor of the values Sharansky evoked.

In the wake of the Holocaust bill media blitz, anti-Semitism and outright lunacy still remains present in the highest levels of Polish government. On Tuesday Prime Minister Mateusz Morawiecki’s father, a former member of parliament, claimed that Jews chose to move into the ghettos, rather than having been forced by the Nazis. As smears of “Globalism” re-enter the political lexicon of our own country, we must recognize that anti-Semitism is resurgent. In Central Europe and with the American President, it is time for Prime Minister Netanyahu to stick to his words.

Sam Rubin was a Fulbright Research Fellow based in Warsaw, Poland. He now writes from New York. Follow him on Twitter @SamH_Rubin.

I Suffered Anti-Semitism In Poland. Why Won’t Netanyahu Condemn It?