Trump Is Going to Nix the Iran Deal. Now What? 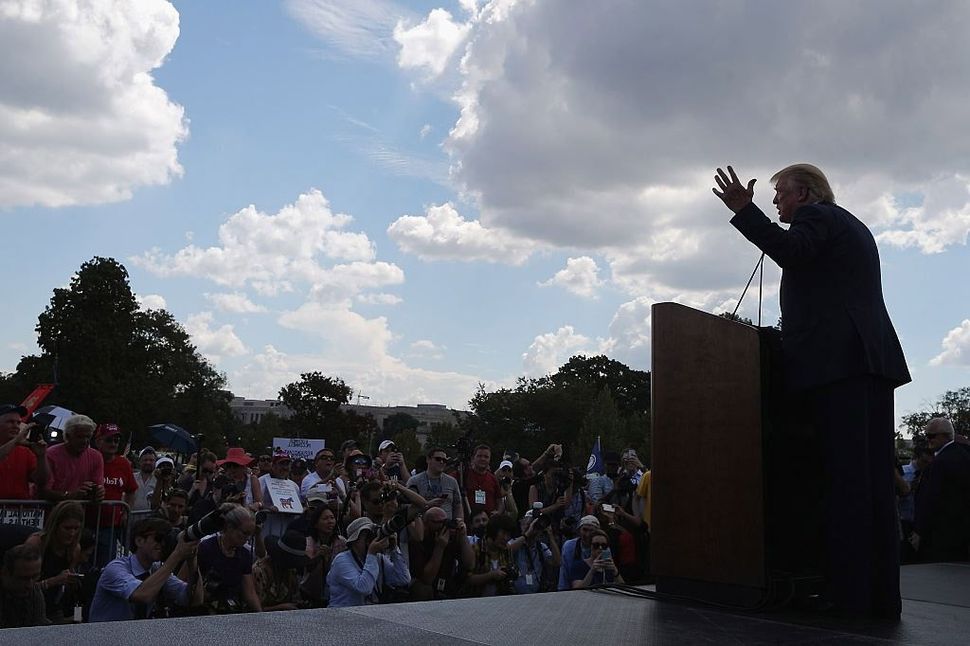 Republican presidential candidate Donald Trump addresses a rally against the Iran nuclear deal on the West Lawn of the U.S. Capitol September 9, 2015 in Washington, DC. Thousands of people gathered for the rally, organized by the Tea Party Patriots, which featured conservative pundits and politicians. Image by Getty Images

As a proud veteran of the Obama Administration, I don’t think it surprises anyone that I am a supporter of the Iran nuclear deal. It was not a perfect deal — there was no such thing — but it removed key materials and infrastructure from Iran’s possession and imposed an intrusive monitoring regime, ensuring that Iran would remain farther from a nuclear weapon for longer than under any alternative.

That doesn’t mean I can’t reach some common ground with deal opponents. My good friend, Mark Dubowitz, the CEO of the Foundation for the Defense of Democracies, is an articulate and influential critic of the deal. In January, he and I wrote about our common view, despite our differences on the nuclear deal, that the United States should lend significant support to the Iranian people in their protests against the vile regime.

More recently, Dubowitz and I worked to develop elements of a fix to the nuclear deal that we thought could pass muster in the negotiations between the United States and our European allies. In short, it would apply tough new sanctions against Iran until it ended development and testing of its ballistic missile program, ensure full access for inspectors to military sites Iran has declared closed, and establish a trigger for reimposing nuclear sanctions if Iran’s timeline to break out to a nuclear weapon ever falls below one year (where it stands currently under the deal). The European states could enhance the deal by imposing sanctions on the Iranian Revolutionary Guard Force (IRGC) and Hezbollah in its entirety (not distinguishing between its political and military wings), matching U.S. positions.

Speaking for myself, while I still feel that a fix of this nature is advisable, I believe it is too late.

After the visit to Washington of President Emmanuel Macron, it became apparent that President Trump has decided to withdraw from the agreement. Macron, who came expressly to try to persuade Trump to remain in the agreement, told reporters that he left convinced the United States will pull out of the deal, so that Trump can fulfill a promise he made during his campaign. Trump, Macron noted, “is very predictable,” in some ways. He is particularly so when it comes to reversing signature achievements of President Obama (think TPP, Obamacare, and DACA).

I think it is a terrible mistake. Once the United States withdraws, Iran will be released from its obligations under the nuclear deal, and will be able to restart its work on prohibited technologies. The United States, which will be blamed by much of the world for the breach, will have a hard time marshaling international solidarity to build new pressure on Iran and seeking a stronger agreement.

But it is time to move on.

There’s a dirty little secret that is obscured by the harshness of the debate between supporters and opponents of the JCPOA. Both sides want to prevent Iran from ever getting a nuclear weapon, and both sides don’t trust Iran not to try. They just differ on the most effective means to prevent it.

That is why Israeli Prime Minister Benjamin Netanyahu’s revelation of documents that prove Iran maintained a dormant nuclear weapons program that it hoped to restart later, while dramatic and indicative of Israel’s awe-inspiring intelligence capabilities, didn’t change the broader picture or many minds. The stolen documents told us what we know — about Iran’s nuclear knowledge and intentions. They reinforced the reasons supporters favor the deal, and the arguments of detractors who oppose it.

Supporters like me can acknowledge that the deal was not perfect. There were provisions that I wish had come out stronger. It bought time — about a decade and a half — an undervalued commodity. But no more than that. It did not end Iran’s nuclear program for all time, an unachievable objective. It needed to be strengthened, and perhaps revisited later. The deal may have been sold as a fabulous deal because, in politics, that is how you sell things. In reality, as in so many aspects of international affairs, it was the least bad option. It wasn’t great; it was just better than any alternative. It kept Iran farther from a nuclear weapon for longer than any other approach.

Trump has a different judgment. I have low confidence in his ability to make sound decisions, but that’s about him. There are serious foreign policy professionals who I respect who favor withdrawing from the deal. That doesn’t make them war-mongers. I think that path is a mistake. But I can see it coming.

The most recent sign was Netanyahu’s press conference, well-coordinated with the Administration, including a phone call with Trump and the visit of Secretary of State Mike Pompeo. Trump will cite the documents revealed by Netanyahu as evidence to justify his decision — already made — to withdraw from the deal.

So I am shifting my focus. The priority needs to remain preventing Iran from getting a nuclear weapon. It is far too dangerous to let this regime, which threatens Israel’s destruction, sponsors terrorist organizations, and seeks to dominate its neighbors, possess that technology. Even without nuclear weapons, Iran is wreaking mayhem all over the Middle East. We cannot allow it to do so under a nuclear umbrella.

I believe that the JCPOA was the best (or least bad) option to achieve that goal. But if we don’t have my preferred option available, I hope we can find the second least bad one.

I’m not sure what it is, and proponents of withdrawing from the deal have not been clear on their alternative. Getting Iran to agree to a new, tougher deal seems unlikely without generating unified international pressure, most difficult after Trump’s unilateral move. I expect the Europeans and Iran to try to stick with the deal for a while, but it won’t be sustainable. U.S. sanctions on European firms and political pressures inside Iran will lead to a slow collapse at first, followed by an Iranian rush to resume its uranium enrichment program, perhaps stopping just short of a full break-out.

We will probably have to employ covert means. We will have to coordinate closely with Israel and our Gulf allies. If all else fails, we may need a military option. We have one because Obama put it in place. It is available, and so perhaps is an Israeli one. It is a dangerous path, and we don’t know where it could lead. Many Americans and Israelis, as well as Iranians, Lebanese, Syrians, Saudis, and Emiratis could die. And when it’s over, Iran might be able to regenerate its nuclear program in less time than we would have gained in the JCPOA. We need to do everything possible to avoid these scenarios, while also keeping Iran from a nuclear weapon.

When Trump withdraws, I’ll say it was a mistake, and believe it with all my heart. But I won’t spend the next three years pointing out every failure that results from it, or engaged in political point-scoring to place blame for what I consider a bad decision. (I hope it won’t be a catastrophic decision.) JCPOA opponents could have been more constructive than simply attacking every aspect of the policy, and even the motives, of those who support it, every day for the past three years. I will try to find ways and support reasonable means to prevent Iran from getting nuclear weapons. That must remain the priority.

Daniel B. Shapiro is distinguished visiting fellow at the Institute for National Security Studies in Tel Aviv. He served as U.S. ambassador to Israel and as senior director for the Middle East and North Africa at the National Security Council during the Obama administration.

Trump Is Going to Nix the Iran Deal. Now What?