These Days, We Jews Have To Call Each Other Out – Because No One Else Will 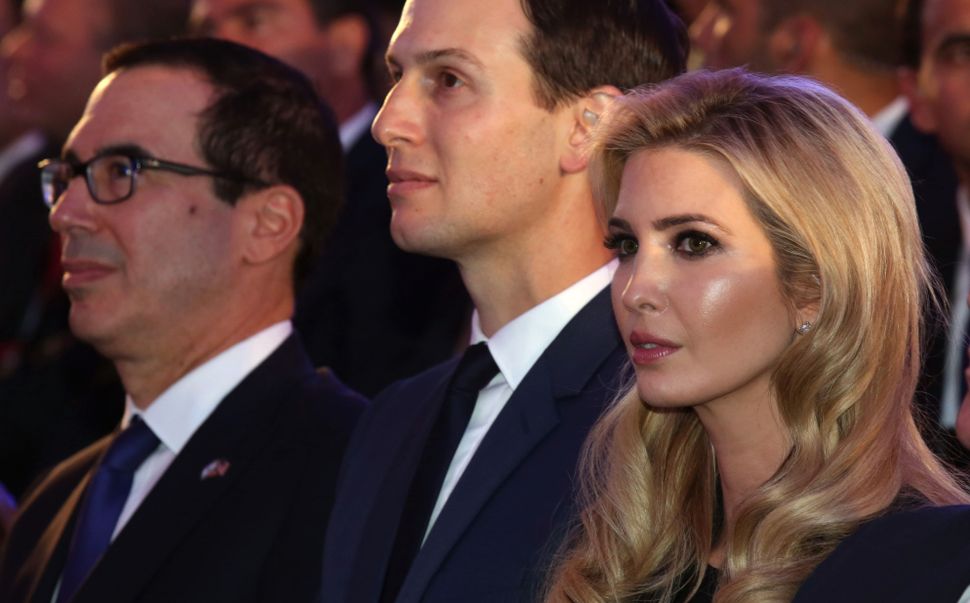 Nearly forty-one years ago, a letter sorter for the U.S. Postal Service was arrested. He’d shot and killed six people, and wounded nine others in New York City.

Among those upset by the arrest in 1977 were Jews, because the perpetrator was one of their own. His name was David Berkowitz, or as he signed his letters to the police as they tried to catch him, “Son of Sam.”

“The Jewish population received news of the arrest of the suspected murderer with feelings of shame,” the Forward reported at the time.

The tendency of Jews to feel shame at the misdeeds of our own was not born in 1977, nor did it end there. And that Judeo-historical tendency has remained top of mind during Donald Trump’s administration, which has found innovative ways to be terrifying, not least of which in the number of Jews it counts in its membership.

The top two officials are Christians, of course, and fluent in the language of white supremacy, but Jews, alas, have played a part in the destruction wrought over the last eighteen months.

Without engaging in Jew-counting (a practice pioneered by former Nixon aide Fred Malek, who, naturally, is friendly with Trump), we should at least note some of the contributions of the administration’s big machers.

There’s Jared Kushner, the presidential son in law, who dipped his toe into the Middle East and got steamrolled. Then he took on the responsibility of helping hurricane-ravaged Puerto Rico, which Trump has purposely left to flounder; it’s been turned into a prospective energy hub. Kushner also has a peculiar, almost impressive ability to incorrectly fill out dozens of ethics disclosure forms. And he is such a bumbling neophyte that no less than four countries — including Israel! — planned to exploit his ignorance.

Then there’s Kushner’s wife and President Trump’s daughter, Ivanka Trump, who has proved no less incompetent, whether she’s awkwardly piggybacking on #MeToo, despite happily working for a prolific and boastful sexual predator, or finding herself neck-deep in Robert Mueller’s investigation. The best you can say for Ms. Trump is that she’s useless; the worst, that she gives cover to Trump’s monstrous policies.

And then there’s dead-eyed Stephen Miller, who seems to get off on tormenting immigrants. If history remembers him, it will be for pushing the United States to turn away refugees of war and strife. For a Jew to do such a thing, given our post-Holocaust history? Has that old chestnut, never again, ever rung so hollow?

Wherever you turn, Trump seems to have unsavory Jews doing unsavory things.

Predictably, none of them seem troubled by the recent spate of death and injury in Gaza; on the contrary, at the new Jerusalem Embassy opening, which coincided with the deaths of 63 Palestinians in Gaza, Ivanka and Jared were jubilant. If anything, given that the White House’s approach to Israel constitutes a “blank check,” their indifference amounts to encouragement.

It’s all such a nightmare. This is the most grotesque display of Jewish incompetence and even malice in recent memory.

To be sure, the large majority of us did not vote for these monsters and would just as soon see them carted off to the Hague. But even so, perhaps especially so, the experience of having our ne’er do wells paraded for all to see is deeply humiliating.

This period, as I’ve come to think it, is the Shonde Years.

It’s fair to ask, why focus on Kushner? Why focus on Ivanka? They’re woefully ineffective! They’re white noise! And Stephen Miller, well, he isn’t freelancing, right? He’s doing what the boss wants. Shouldn’t we train our fire on Mike Pence and Trump? Indeed, isn’t there something unsavory about focusing on Jewish misdeeds, when the true levers of power are the non-Jews?

Determining clout isn’t the point, though. This is about a reflex, and a responsibility, to police our own. If American Jews are disproportionately critical of these people—as opposed to, say, Pence, our born-again Christian vice president who once fanned an HIV outbreak for sport—it is only because there are so many Christians and so few Jews. He’s not our brother to keep.

When we fuck up, it’s more noticeable. So how can you not theatrically clear your throat and tug extra hard at the collar?

Of course Chelsea Handler, who was raised Jewish and had a bat mitzvah, roasted Ivanka and Jared for “tak[ing] time away from their busy schedules of not being qualified to represent the US to go represent the US, and celebrate moving the capital in exchange for the [A]delson’s donations, while 50+ Palestinians have been killed.”

I’m glad Ivanka and Jared could take time away from their busy schedules of not being qualified to represent the US to go represent the US, and celebrate moving the capital in exchange for the adelson’s donations, while 50+ Palestinians have been killed.

And of course Michelle Goldberg, in the pages of the New York Times, tiptoed right up to labeling Israel an apartheid state, and called Ivanka a “Zionist Marie Antoinette.”

Just as we feel shame for each other, we feel emboldened to criticize each other. Thus, we must speak out when Kushner repeats Israeli hasbara, as he did at the Embassy opening when he said, “As we have seen from the protests of the last month, and even today, those provoking violence are part of the problem and not part of the solution.”

And policing our own doesn’t mean simply going after government officials. Power, after all, is a sliding scale. It also means giving very little quarter to anti-Palestinian media figures, even if they may not be household names.

Bari Weiss, for example, a staffer at the New York Times Op-Ed pages who made news during the Winter Olympics for a truly ill-advised Hamilton reference, took a particularly egregious position on the Palestinians who were killed on Monday. As she put it on MSNBC’s “Morning Joe,” “Dying for a photo op is what happened earlier this week.”

The belief that Palestinians have no agency and don’t value their lives is pernicious. And as Lisa Goldman argues in these pages, it’s not journalism; it’s Israeli government propaganda.

It’s nauseating, though it’s not the sort of thing that will bother Joe Scarborough. And let’s face it, most American Christians don’t give a damn either; if anything, they seem intent on guaranteeing the bloodshed continues.

But Jews absolutely should give a damn. About Gaza, of course, and the scandals of Ivanka and Kushner, but also about “Trump’s Jews,” of whom Talia Lavin recently wrote so elegantly. The sins of Michael Cohen, Eric Greitens, and Elliott Broidy are, she says, a shonda fur di goyim.

That phrase used to mean something. It used to mean, let’s not embarrass ourselves in front of the gentiles.

And that’s the worst part about the Shonda Years: the goyim, in fact, don’t really care.

Which means it’s on us to raise hell, to shout from the rooftops when our brothers and sisters have transgressed.

Let’s hold them to a higher moral and standard. This is, I think, the just course. Let us, in the manner of those long-ago New York Jews upset about a killer named Berkowitz, have the decency to feel shame.

These Days, We Jews Have To Call Each Other Out – Because No One Else Will