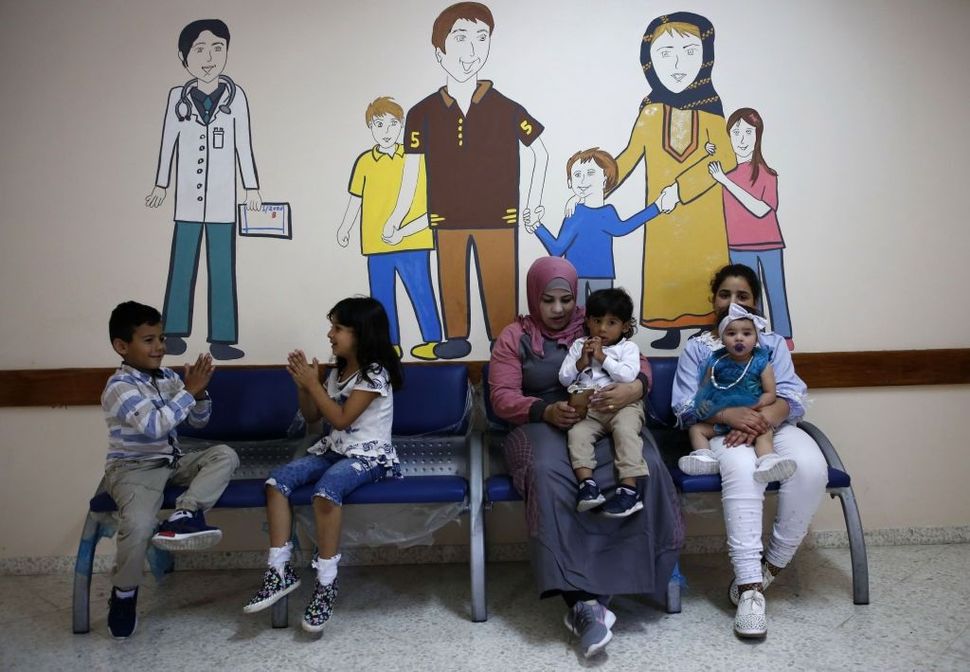 Palestinians wait at an UNRWA clinic to receive free medical check up from the United Nations Relief and Works Agency’s (UNRWA) teams in the southern West Bank city of Hebron on August 9, 2018 Image by Getty Images

On a warm day in 2014 in al-Amari refugee camp near Ramallah, Mohammad Eliyan, who represents the central West Bank refugee camps at the PLO, was complaining to me about UNRWA. Every year for the past five, the UN agency responsible for Palestinian refugees had been scaling back its services, he said.

At that point, a strike was in effect by the agency’s employees in protest over wages, which led to a serious crisis inside the camps. Tens of thousands of students who were supposed to be in school stayed home. UNRWA-run medical clinics were shut down and garbage collected by the agency’s services lay strewn across camp’s thin, maze-like streets.

UNRWA wasn’t solely to blame. The Palestinian Authority, which claims to be the legitimate government representing Palestinians in the West Bank and Gaza Strip, had not fulfilled its promises, said Eliyan. The government had committed to setting up projects inside the camps to improve living conditions.

For almost two months, schools in 19 camps around the West Bank were shuttered as a result, and the 51,000 children who attended them didn’t attend classes. Instead, many were in the streets protesting, burning tires and tree branches to block roads, leading to clashes with Palestinian security forces. “There is a real crisis in the camps,” explained Eliyan. “We don’t want things to come down to this. We don’t want these clashes and escalations. There is an urgent need to solve the crisis.”

Taha al-Bis, who oversaw committees representing camp residents, told me some donor countries would like to see UNRWA fall apart. That would, in effect, dissolve a historic aspect of peace negotiations — the question of refugees and their right of return to their original homes in what is now modern-day Israel. The only way through the crisis, said al-Bis, is to solve the refugee problem.

Back in 2014, it was hard to conceive that any regional or Western states wanted UNRWA to disappear. Many countries, like Jordan and Lebanon, where the bulk of Palestinian refugees still live, depend on the UN agency to manage the refugees’ day-to-day lives so they don’t have to. For instance, in Lebanon, the government uses the agency to ensure it won’t have to integrate Palestinians into its sectarian political system.

But many Palestinians like Eliyan and al-Bis believed that the UN agency’s economic woes were rooted in a growing lack of interest from the West in the plight of Palestinians. Fanning the flames of their fears were donor countries’ dwindling contributions, especially the US, which had fallen in the period since the global financial crisis.

No other organizations work in the camps, so their 750,000 inhabitants, displaced from their original homes in historic Palestine, are fully dependent on UNRWA. But the UN agency, which is responsible for 5 million registered Palestinians all-together, has been struggling financially for years.

The agency’s emergency funds at one point diverted to Syria, where many Palestinian refugees — 540,000 in 2014 — had found themselves displaced yet again. Also, many European donors, including the largest, Germany, have failed to contribute as much to UNRWA as they spend resources in-country to deal with higher refugee arrivals from war and climate change around the world.

Some donors claim UNRWA is a bloated bureaucracy or an anti-Semitic institution that perpetuates the refugee issue. Some say it is not doing enough for Palestinians, is inefficient and merely maintains the occupation by doing its work for it, giving the Israeli authorities a convenient administrator of the very population it occupies.

The US has funded UNRWA ever since it was founded in 1949, a year after Israel was created. Every administration, despite its criticisms of the agency, has supported it, viewing it as a necessity for regional stability. Today, however, there is reason to believe Eliyan and al-Bis’s contentions that UNRWA is indeed being targeted. It is no longer a secret that the US administration has made an effort to torpedo the agency’s mission and even put it out of business all-together.

Foreign Policy first reported in early August that Jared Kushner, Trump’s son-in-law and Middle East advisor, has been trying to push for UNRWA’s dissolution. Part of a larger effort to strip millions of Palestinians of their refugee status, Kushner’s work behind the scenes goes hand-in-hand with the Trump’s administration’s recognition of Jerusalem as Israel’s capital, which surprised the Palestinian Authority and prompted them to boycott the administration.

At that time, Trump hailed his move as a calculated effort to “take Jerusalem off the negotiating table.” Palestinian leaders now believe he also wants to take the refugee file — like Jerusalem, one of several final status issues that would be determined in negotiations — off the table as well. Hussam Zumlot, the PA’s ambassador to the US, who has since been recalled by the PA, said that Trump had in fact taken “the table altogether” with his Jerusalem move.

The Trump administration is now trying to stop refugees from passing their status to their descendants, which would greatly curtail any future claims in a peace agreement. Reportedly, Kushner spoke to Jordan’s King Abdullah about this in June, pressing the kingdom — home to more than 2 million Palestinian refugees — to strip them of their refugee status, effectively eliminating UNRWA.

For months, reports and rumors of a concerted effort to strip refugees of status had circulated, raising the ire and fears of Palestinians. For them, Kushner was reviving the widely-propagated (and largely discounted by decision-makers) “Jordan is Palestine” option, using Gulf petrodollars to cover costs of resettling or naturalizing Palestinian refugees and thus replacing UNRWA.

UNRWA’s commissioner-general Pierre Krähenbühl called these efforts a vindictive step aimed at hurting Palestinians for speaking up against the US policy shift on Jerusalem. Despite it all, the aging and beleaguered PA president, Mahmoud Abbas, has been able to hold out. Coming under considerable pressure from the Americans and their funding freeze, and from Gulf Arabs and other internal domestic factions, he has not engaged in negotiations, perhaps knowing that Jerusalem is not an issue he can make concessions on.

The Europeans have continued to support UNRWA despite US intransigence and threats, and the rest of the world continues to view the current US administration with disdain. Some Israelis have also come out against redefining Palestinian refugees out of existence, saying it will lead to instability in host countries and won’t solve the problems of millions living in poor, dilapidated conditions. Indeed, it could create millions of formally stateless people in a volatile region.

Just like the Jerusalem move, the attempt to shut down UNRWA will only serve to fuel enmity between Palestinians and Americans, and embolden Israel to build more settlements and entrench its occupation with impunity. Every party involved has benefited from having UNRWA around to assume responsibility for the welfare of hundreds of thousands, so who or what exactly will be responsible for these people when UNRWA ceases to exist without a peace agreement? What serious, real tangible effort has been made to find a solution to their plight?

The UN agency cannot be blamed for the US’s dishonesty as an interlocutor and for the lack of progress in bringing about even a semblance of a just peace agreement all the while it continues to provide education and health services to hundreds of thousands of refugees waiting for a solution to their plight.

Dalia Hatuqa is a journalist based in the US and the West Bank. Her work has been published in Foreign Policy, the Economist, the Atlantic and others. Follow her on Twitter @daliahatuqa.