Thanks To Trump, Dr. Ford Was Laughed At. Again. 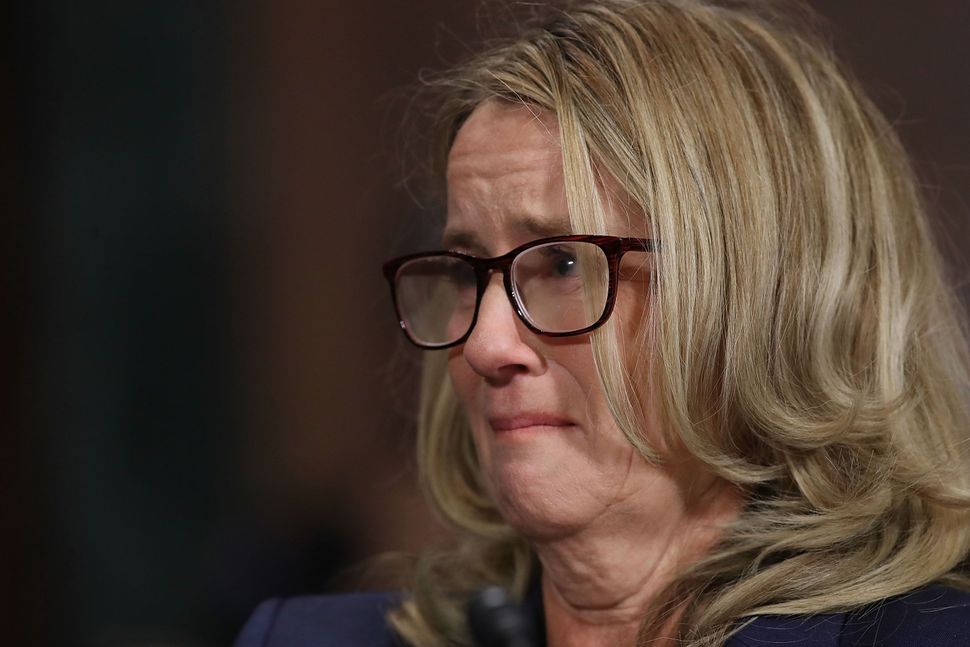 Christine Blasey Ford has had the kind of week nightmares are made of. Three weeks ago, she was a private citizen; today she is a public target — targeted by the most powerful man in the world.

Last week, Doctor Ford sat down in front of a group of senators — 11 white Republican men and 10 Democrats (5 women and 5 men). She testified quietly, a serious woman with a childlike voice, the kind one might expect out of a 1950s movie star. She spoke about her horrific ordeal as a 15-year-old girl. She described how President Trump’s Supreme Court nominee Brett Kavanaugh holding her down and trying to pull off her clothes. She described him laughing at her. At one point, she talked about how she was worried Kavanaugh might kill her.

When asked what she remembered most from the event, she said those unforgettable words: “Indelible in the hippocampus is the laughter, the uproarious laughter… at my expense.”

At the end of the testimony, I could feel a rage rise in me like never before. It was rage over what she had been through when she was 15, rage at what she was going through now, and rage at what it meant for women across the country.

Dr. Ford is the kind of woman we were all expected to be: a doctor, a good girl who played by the rules of bourgeois life. She is married. She has two sons.

And during her testimony, she was likeable; she was vulnerable. She was the prototype of the perfect female witness and she presented an extremely credible memory — just like Anita Hill did in 1991.

On Tuesday night in Southaven Mississippi, the president of the United States made fun of her testimony.

He wasn’t as mean as he usually is. It was as if he knew he was treading on dangerous ground. He didn’t criticize Ford the way he has historically criticized the women who have accused him of sexual misconduct.

Instead, he implied that Dr. Ford, a professor at Palo Alto university who teaches graduate students in clinical psychology, was confused. Dr. Ford, who has two Master’s degrees and a PhD and has co-authored over 50 scientific publications, was confused.

Trump’s fun-making of Dr. Ford is par for the course. That’s because to Donald Trump, women are either confused, dumb sex objects — or Ivanka.

Still, he initially called her a “credible witness” after her testimony. But come Tuesday, it was as if he could not hold it in any more and the floodgates opened.

And boy did they open. He made fun of Dr. Ford for not knowing the address of the house she was attacked in 35 years ago. He also lied about her. He said the only thing Ford remembered was having one beer. He chipped away at her story using hyperbole and falsehoods.

And I thought of those words again: “Indelible in the hippocampus is the laughter, the uproarious laughter… at my expense.”

That was the moment for me and a lot of women that the Kavanaugh confirmation stopped being about Brett Kavanaugh and the Supreme Court, or even about Dr. Ford’s testimony.

The confirmation of Brett Kavanaugh has now become a hideous Rorschach test for the miserable intersection of misogyny and partisan politics.

The idea that the woman must be confused, that so many of us could be confused, feels like it undermines the very notion of women’s autonomy in society.

The result is that many women are mad. They’re mad on Twitter. They’re mad at school pick-ups and on Facebook and in the New York Times, where Margaret Talbot makes the case that Dr. Ford may have actually been treated less well than Anita Hill.

In some ways it’s also worse because the male GOP senator have gotten savvier about the way they’re dismissing women. Trump was not the only one to call her credible. Many Republican men including on the Senate Judiciary Committee pretended to listen and be respectful, though they still made horrible, disrespectful gaffs that revealed their poorly hidden sexism. Orrin Hatch called Ford an “attractive witness” and when asked to elaborate, he said, “She’s pleasing.” She is a 51-year-old doctor.

And while some Republicans didn’t enjoy the optics of a sitting president making fun of a sexual abuse survivor, they had no trouble shifting their focus almost immediately to excitement about Kavanaugh’s ability to energize the base.

And of course, those worried about male reputation over sexual assault are having a field day.

Brett Stephens wrote a column today in the New York Times commending Donald Trump for standing up for Brett Kavanaugh. “Falsely accusing a person of sexual assault is nearly as despicable as sexual assault itself,” he wrote.

We are your mothers, your daughters, your sisters, your aunts, your bosses, and most importantly, your equals. We will not be relegated to the ash heaps of history. We will rise and crush the patriarchy with a rage not felt since the women’s suffrage movement.

Thanks To Trump, Dr. Ford Was Laughed At. Again.