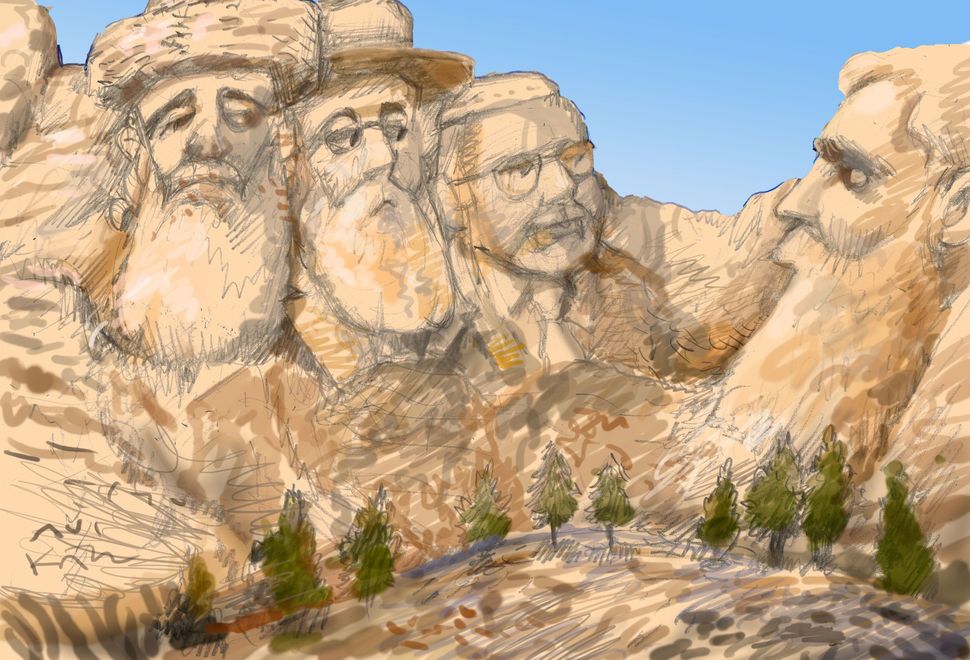 Many non-Orthodox Jews assume that all Orthodox Jews must be fervent Zionists. Given the centrality of Israel in Jewish movements — at least until recently — the natural assumption is that the more religious you are, the more Zionist you must be. Surely if today’s Evangelical Christians are Zionists, the Orthodox must be as well.

This assumption, however, is wrong.

The most traditional Orthodox communities have historically been deeply troubled by Zionism. From its inception, many vocal religious authorities were deeply opposed to the entire Zionist enterprise. They viewed in the secular state a form of nationalism that competed with the historic religious bond to the land of Israel, and with religion more generally.

Within the Orthodox world and among historians who focus on Orthodoxy, the assumption has been just the opposite of the popular conception, namely, that ultra-Orthodox are firmly anti-Zionist, so much so that whether one is pro- or anti- Zionist is often considered a significant marker that distinguishes modern-Orthodox Jews from ultra-Orthodox Jews.

But this view, too, is mistaken.

American ultra-Orthodox Jews (also called American haredim — Hebrew for ultra-Orthodox) vary in their attitudes towards the modern state of Israel. Crucially, most cannot be characterized as either Zionist or anti-Zionist.

In fact, American haredim rarely consider the issue of Zionism at all.

This is not to say that they don’t support Israel. With few exceptions, most American haredim are fervently pro-Israel. But their support is complex. They ascribe neither political nor religious significance to the State of Israel, despite the fact that they are more deeply connected to Israel than any other group of American Jews outside of modern Orthodoxy.

In other words, contrary to the mythology surrounding the issue, ultra-Orthodox Jews are best described as pro-Israel non-Zionists.

Ideology is simply the wrong lens to understand how ultra-Orthodox Jews think about Israel.

In an ongoing research study I’ve been conducting on this topic, participants, many of whom are actively involved in schools, yeshivas, communal institutions, and the press, expressed no overt ideological support of Israel. The opposite, in fact: they disavowed Zionism as an official ideology. Zionism in their view is an irrelevant social, political category that plays no role in American haredi life. And yet, outside of those closely connected to the Satmar chasidim, the most anti-Zionist group apart from Neturei Karta, they expressed strong implicit (and often explicit) support, engagement with, and concern for Israel. 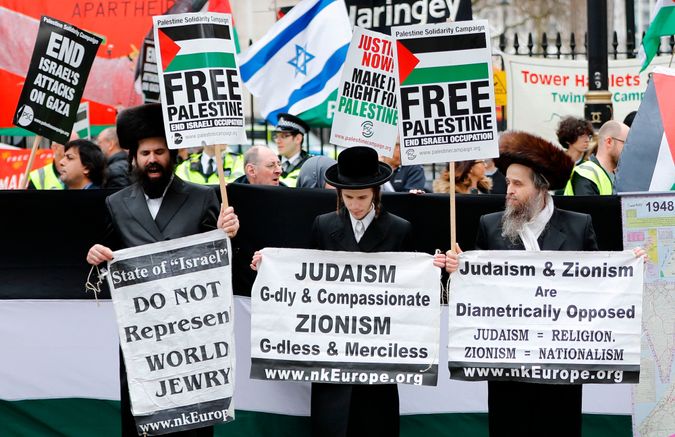 Whether or not there was ever past religious opposition to the State doesn’t matter; as a matter of history, the State was in fact created, and it is in that reality that we now live.

These views were reflected in conversations I had with ultra-Orthodox educators.

“I think that if you would ask people on the [ideological] level what their [ideologies] are, many will instinctively tell you that they’re not Zionistic, But in the practical world, that doesn’t have much meaning,” the head of a major haredi Yeshiva in the greater New York area explained, echoing many others I spoke to.

“They don’t even know what [Zionism] means because the old battles are gone, so there’s very little practical relevance,” he went on. “If somebody was going around saying I’m an anti-Zionist, they also would think he’s nuts. What are you getting involved with this for?”

This attitude is reflected in the haredi K–12 educational system as well. “By us, the State of Israel is not a topic,” said one head of school in New Jersey. “It’s moot; it’s not part of our curriculum.”

Another administrator denied that Zionism even existed anymore at all, while a third expressed indifference to the possibility of Zionists in her Bais Yaakov school.

“I mean, we’re all pro Eretz Yisroel,” she said. “If someone hangs a flag outside their house for Yom Ha-atzmaaut, you know, everyone has their way to serve Hashem.”

These views are pervasive in the Orthodox communities in the New York/New Jersey area, home to the largest cross-section of Orthodox Jews in the U.S. But while these Orthodox communities may seem monolithic to outsiders, as with every community, there is a remarkable amount of diversity once you start looking closely. And this diversity is reflected, among other factors, in different approaches to Zionism.

Williamsburg and Boro Park in Brooklyn, along with other towns to the Northwest of the city like New Square, Monroe, and Kiryas Joel, are centers of Hassidic haredi life. Other neighborhoods in Brooklyn and Queens are heavily Yeshivish; unlike their Hassidic counterparts whose religious practice revolves around dynastic rebbes, theirs is centered on men’s Talmud study in the Yeshiva. 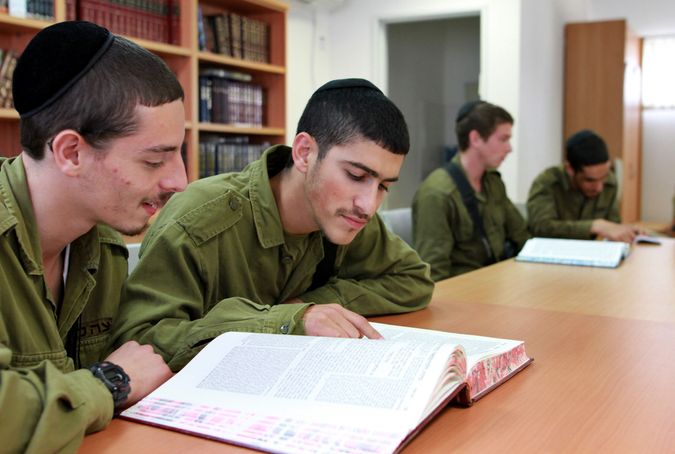 Meanwhile, modern Orthodox communities, in neighborhoods like the Upper West Side, Riverdale, and Teaneck, NJ, tend to be more invested in contemporary culture and knowledge. These communities tend to be fervently Zionist, with support for Israel stipulated in the mission statements of nearly all modern Orthodox schools and shuls.

The dramatic contrast between the crowds of modern Orthodox Jews celebrating at the Israel Day Parade and the handful of haredim protesting the Jewish state appear to encapsulate this divide.

But aside from a few protesters, vocal anti-Zionism is absent from American haredi communities, even from most Hassidic ones where it is the implicit ideology.

What this means is that while both Hassidic and Yeshivish Jews were ideologically opposed to the State’s original formation, they nonetheless study in Israel, visit Israel, live in Israel, and care deeply about its well-being. Often ideologically opposed to the Israeli army — that “anti-religious” institution — the ultra-Orthodox nonetheless applaud and valorize the army’s actions in defense of the State.

Pick up one of the many mainstream English language haredi publications and you will find articles on Israeli politics, culture, and technology; profiles of prominent Israeli figures; historical analyses of Israel’s past wars; and numerous ads for housing in Israel, including holiday charter flights to Israel, hotels and rental cars, and charity for Israel’s poor.

If most American Zionists were this connected to Israel, Israel-Diaspora relations might be in better shape.

So what’s the difference between Israel and “Eretz Yisroel”? The connection Orthodox Jews have to Israel is largely about their connection to the holiness of the land itself, the purity of the Torah study that takes place there, and the Jews that live there.

American haredim are employed at higher rates, earn more at the jobs they have, and hold a greater diversity of occupations than Israeli haredim. Thus, the quality of life of American haredim is many orders of magnitude greater than that of their haredi peers in Israel. 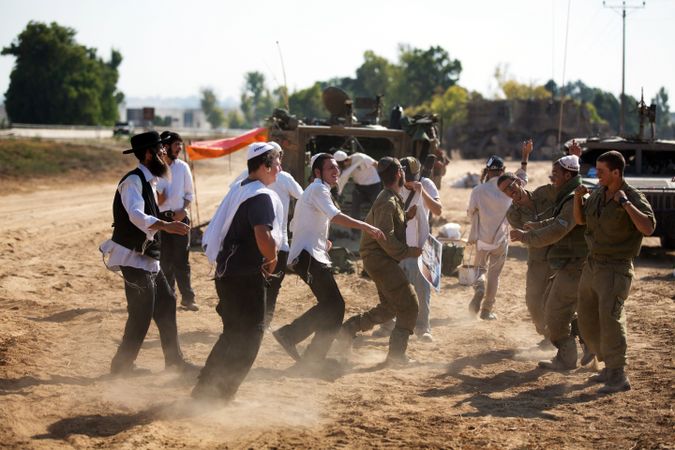 Israeli soldiers dance with Orthodox Jews who came to show their support and to cheer them up at an army deployment near Israel’s border with the Gaza Strip, on July 20, 2014. Image by Getty Images

The American haredim I spoke to all love Israel, and admire the bare-bones Israeli haredi life—from a distance, and they uniformly described Israel in romantic terms. But at the same time, they all insisted that it is not a good idea for Americans to try to live in Israel long term.

“There is nothing compared to the [holiness] of Eretz Yisorel,” I heard over and over in interviews. “The experience of seeing how people live there, with such purity and poverty, sacrificing everything for Torah; to just feel the air of Eretz Yyisroel— the Jewish [soul] feels at home.”

But although poverty was held up as a value, it was always with the acknowledgement that most Americans were unlikely to ever really be comfortable with that standard of living.

Beyond material well-being, another major theme of nearly all my respondents was moderation: Israel may be a wonderful place — indeed, it may be the wonderful place — but it’s not our place. It’s too extreme, too segmented, too contrary to the American haredi way. “The culture (in Israel) is intense, black or white,” said one Yeshiva Rebbe. People there are “either very modern or very right-wing. Moderation is hard to come by there.”

He and many others contrasted this with the American haredi lifestyle. Indeed, what my interviewees showed me over and over was that despite the stereotype of insularity, American haredim feel deeply American.

When you take the label “Zionist” off the table and look clearly at the American haredi community, you’ll find a tremendous sense of identification with Israel, support for Israel in its conflicts with its neighbors, and love for the land of Israel.

Amongst hassidim, there is less overt support for Israel, and among some Hassidic groups, such as Satmar, there is a strong sense of anti-Zionism.

Nevertheless, most hassidim I spoke to maintained an attitude of pragmatic neutrality: Israel as a Jewish state has no intrinsic value, but if the state protects Jews, and allows them live religious lives, then it has value, and is a good thing. To the extent that it harms religious life and attempts to secularize religious Jews, it is a force for bad.

I once asked a Hassidic magazine publisher whether it would have been better if the State of Israel had never been created. He was adamant in his response.

Non-Zionist but pro-Israel, Orthodox Jews have found a unique workaround for a deeply religious, if non-political, relationship.

Moshe Krakowski is an Associate Professor at the Azrieli Graduate School for Jewish Education and Administration at Yeshiva University and directs Azrieli’s Master’s program in Jewish education. He studies American Charedi education and culture, curriculum, cognition, and inquiry learning in Jewish educational settings.