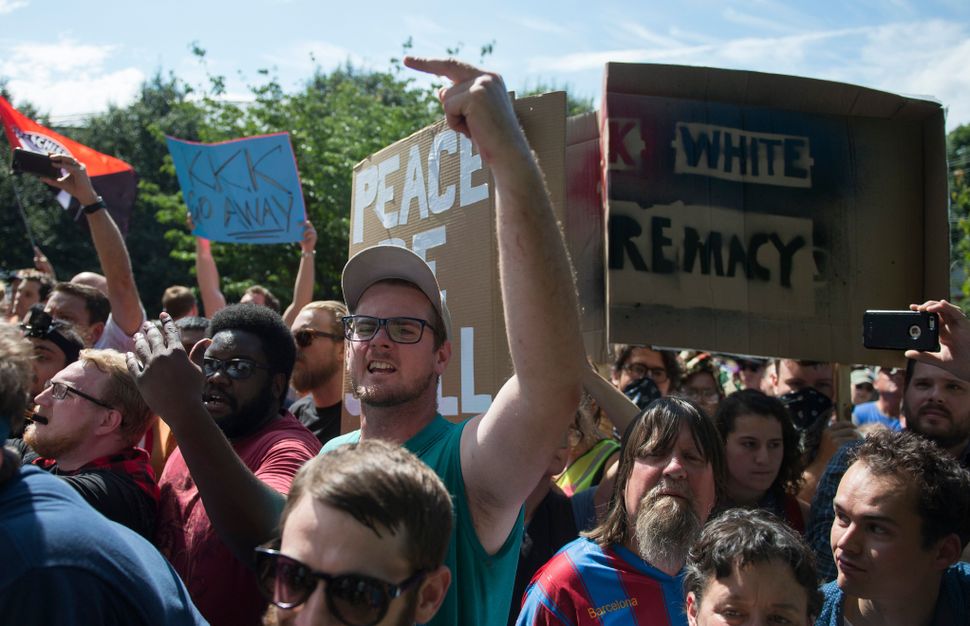 It is no surprise that the British Labour party would ask an anti-Zionist to help fight anti-Semitism. Labor’s leader, Jeremy Corbyn, has long supported the Palestinian cause, and facing a long-running scandal over Jew hatred in Labor, it is natural that the British Left would turn to the Jewish Left. Indeed, Corbyn has long been friendly with Jewdas, the irreverent, non-Zionist left-wing group whose member, Annie Cohen, led an “interactive workshop” to “raise awareness of anti-Semitism” to a branch of Labor.

Rather, the surprise is that the Jewish Left is now in the business of offering anti-Semitism workshops.

For many years, the Left has responded to allegations of anti-Semitism defensively. The Left traditionally argues that claims of anti-Semitism are used cynically to delegitimize criticisms of the Israeli government.

I would know: I have made this argument many times.

Ours was a reactive analysis of anti-Semitism, which ceded the term to the Right and then frantically played defense, trying to stave off Leon Wieseltier’s or Abe Foxman’s assaults on this or that progressive figure.

But over the last five years, a younger, radical segment of the Jewish left has positively embraced the term “anti-Semitism” — along with fighting it.

These lefties, associated with Jews for Racial and Economic Justice (JFREJ), IfNotNow, and portions of Jewish Voice for Peace (JVP), put anti-Semitism at the center of their political practice. “We show up for ourselves,” IfNotNow’s principles announce. “We acknowledge the existence of anti-Jewish oppression, in the world and in ourselves.”

And indeed, the group regularly runs trainings on internalized anti-Semitism. This is startling and audacious, given that for decades, “self-hating Jew” has been the term of abuse right-wingers use for critics of the Occupation.

Moreover, these groups tell a clear, coherent story about what anti-Semitism is, a story that is fully compatible with non- or anti-Zionism and which fits Jews into the Left’s broader analyses of class, race and gender.

The Left can talk about anti-Semitism in part because of the surge of right-wing anti-Semitism, especially since Donald Trump’s election. White nationalists are chanting, “Jews will not replace us,” and George Soros has become the object of conservative conspiracy theories.

Such circumstances have eroded the link that the Right forged over the last half-century between anti-Semitism and Israeli politics.

When you ask a millennial to picture an anti-Semite, we imagine not a left-wing Muslim but an alt-right white man.

But the shift on the Left goes deeper than momentary politics, because it reflects a new theory and philosophy of anti-Semitism.

I first encountered that theory in April Rosenblum’s 2007 pamphlet, “The Past Didn’t Go Anywhere,” which I read as a college student. Rosenblum argued that anti-Semitism had emerged from medieval Christianity, and that Jews provided ruling elites, whether in feudal Europe or under global capitalism, a convenient scapegoat for their crimes. She thus integrated thinking about anti-Semitism into the Left’s broader account of how power works across many axes of oppression.

Flash forward to 2017, when JFREJ released “Understanding Anti-Semitism: An Offering to Our Movement.” The document, which quotes Rosenblum, also extends her analysis: “Originating in European Christianity,” anti-Semitism has “functioned to protect the prevailing economic system and the almost exclusively Christian ruling class by diverting blame for hardship onto Jews.”

That is, Jewish middlemen make convenient targets for the rage of the oppressed. JFREJ also connects anti-Semitism to Islamophobia, showing how stereotypes about Jews and Muslims are parallel and intertwined.

In short, the document crafts a usable account of Jewish identity, one that places our history in a larger context of racial and economic exploitation and oppression.

Most notably, while JFREJ does take the standard line on Israel (“Criticisms of Israel and Zionism are not inherently or inevitably anti-Jewish), that gets only a page or two out of forty-four. They are consciously crafting a broader definition of anti-Semitism, one in which Israel politics are mostly a distraction. “Confronting antisemitism,” the pamphlet concludes, “is a necessary precondition for collective liberation.”

You can see the struggle between the two Left views of anti-Semitism playing out within an organization like JVP. The edited collection they released in 2017, “On anti-Semitism,” often seems at war with itself. Some of the essays emphasize the ephemerality of anti-Semitism, or the role of the Israeli government in exaggerating the problem of Left anti-Semitism and discrediting pro-Palestinian advocacy. One essay even declares that there is no anti-Semitism, strictly speaking, in the United States: anti-Jewish prejudice, sure, but no structural oppression of Jews.

On the other hand, many of the contributions of younger Jews were enthusiastic about fighting anti-Semitism, which they placed alongside homophobia, classism, and racism as a basic category of radical analysis. (It bears saying that much of the new theory of anti-Semitism comes from queer Jews and Jews of Color, who often do not enjoy the privileges of the white, mainstream American Jewry and who naturally speak the language of intersectional oppression.)

The JVP collection didn’t say much that was new, but it was fascinating as an index of the two, opposed impulses on the Left: to minimize the significance of anti-Semitism and to see it everywhere; to see it largely as ploy by the Israeli Right and to see it as fundamentally baked into Western civilization.

I have some worries about the new narrative of anti-Semitism. For many white Jews, I think, it is all too convenient to rediscover our own oppression at a moment when our whiteness and privilege make us increasingly uncomfortable.

The liberal interest in Steve Bannon’s alleged anti-Semitism seemed to me very odd: no one in the Trump administration is talking of deporting Jews or banning circumcision, after all.

This is not a critique of JFREJ or IfNotNow, both of which aim to be intentional and careful about race; it is rather my nervousness about how this new narrative circulates in the broader culture.

I have seen too many Facebook declarations to the effect of “I’m not white, I’m Jewish” to be entirely comfortable with re-emphasizing Jewish oppression.

Nonetheless, I think that a broader, proactive analysis of anti-Semitism is the better of the two options for the Left.

Our longstanding defensive posture on anti-Semitism largely failed, for obvious tactical reasons. It was fundamentally reactive, it allowed our opponents to set the terms of the debate, and it meant we were constantly apologizing for perceived faults.

The new Left approach to anti-Semitism, by contrast, puts the Right on the defensive. It is positive and aggressive.

Moreover, it offers Jews a usable identity in the age of Trump: a story in which the struggle for social justice is not merely a Jewish value, but a necessity for Jewish survival.