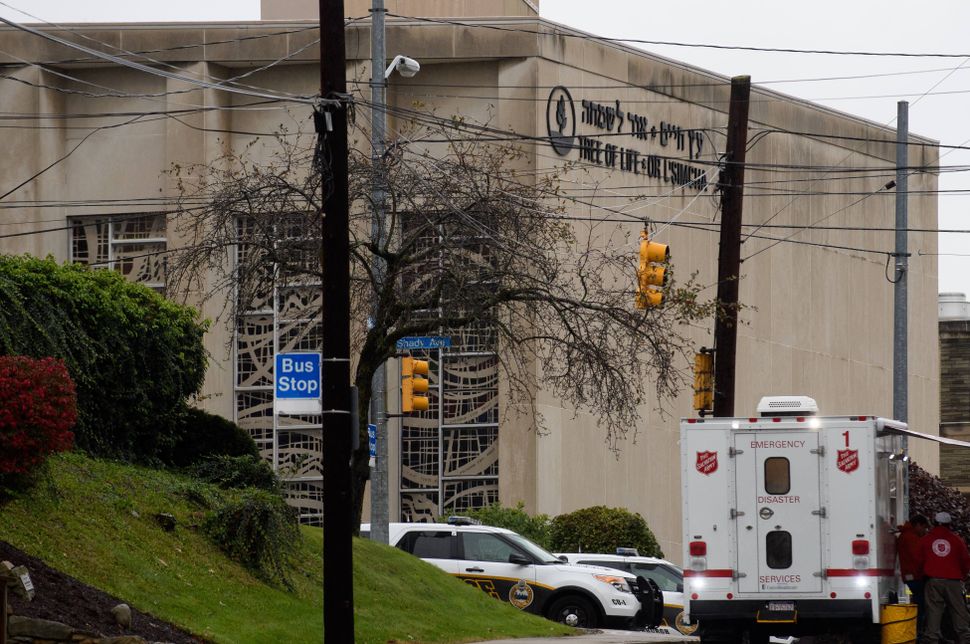 The Saturday morning massacre at Pittsburgh’s Tree of Life Congregation is unique in a certain sense. The murder of 11 Pittsburgh synagogue congregants by a white supremacist gunman is by far the deadliest anti-Semitic attack in American history. But while it’s the worst, it’s not the first, nor the second nor even the 10th case of deadly anti-Semitic violence in this country. It’s not even the first in Pittsburgh.

Organized, ideologically-driven, violent attacks on American Jews and Jewish institutions have been occurring with some regularity for about four decades. About 60 attacks have been planned. Just under half were thwarted, either foiled by authorities or fumbled in execution. Of the 35 or so attacks that succeeded, 17 were fatal, leaving some 30 persons dead, including 10 Jews and six non-Jewish bystanders. Fourteen other victims were minorities — mostly Asians, blacks and gay men — who were targeted in multi-ethnic killing rampages that also targeted Jews.

Roughly half of all incidents, about 30, were perpetrated or attempted by white supremacists and neo-Nazis. Of the remainder, just over half, some 18 incidents, were the work of Islamist extremists, both immigrant and native-born. The rest were carried out by wild teenagers or unknown perpetrators. Of the 10 murdered Jews, four were killed by white supremacists, five by Islamists and one by a flash-mob of black teenagers during the 1991 Crown Heights riots in Brooklyn.

Baumhammers’ rampage followed two similar multi-ethnic racist rampages a year earlier. Each began with shootings of Jews and then proceeded to target Asians and blacks. The first occurred in Chicago on Friday evening, July 2, 1999, when avowed white supremacist Benjamin Nathaniel Smith, 21, shot and wounded six Orthodox Jews walking home from synagogue. He then drove to the suburban Skokie home of popular African-American former basketball coach, Ricky Byrdsong, and shot him dead. The following day Smith shot and wounded a black minister in downstate Decatur, then drove east to Bloomington, Indiana, where he killed a Korean graduate student leaving church on Sunday morning. He later shot himself to death during a police chase.

A month after that, in Los Angeles, white supremacist Buford Furrow Jr., 38, a member of the Idaho-based Aryan Nations, shot and wounded five Jews at the North Valley Jewish Community Center, including a teenage camp counselor, three small children and an office worker. Less than an hour later he killed a Filipino-American postal worker in nearby Chatsworth. He later turned himself in.

A different sort of multi-target spree occurred weeks earlier, in June 1999, in Sacramento, California, where the white supremacist brothers Benjamin and Tyler Williams, ages 33 and 31, firebombed three synagogues on a single night. Two weeks later they murdered a gay couple sleeping at home, then firebombed an abortion clinic.

Those aren’t isolated incidents. They’re part of a four-decade series of organized, ideologically-driven attacks on American Jews and their institutions, beginning in 1977. A useful if incomplete list and analysis was compiled in 2016 by terrorism expert Yehudit Barsky of the Community Security Service.

The phenomenon appears to represent a historical shift that’s received little attention. Before 1977, random street violence against Jews was hardly unusual, but planned, ideologically-driven attacks were virtually unknown. That appears to have changed in March 1977 with the violent takeover and two-day siege of B’nai B’rith International headquarters in Washington, D.C., by a sect of African American Muslims. Since then the attacks have come with numbing regularity.

Among the most familiar incidents:
– The 1977 shooting attack on a suburban St. Louis synagogue by neo-Nazi serial killer Joseph Paul Franklin, killing congregant Gerald Gordon.
– The 1984 assassination of the liberal Denver radio host Alan Berg by members of the white supremacist group The Order.
– The 1990 assassination of right-wing militant Rabbi Meir Kahane, apparently by Egyptian-born Islamist El Sayyed Nosair.
– The 1994 Brooklyn Bridge shooting attack by a Lebanese-American man on a vanload of Hasidic students, killing Ari Halberstam, 16, and wounding three others.
– The 1997 shootings atop the Empire State Building by a Gaza-born Palestinian immigrant, killing a Danish rock guitarist and wounding six others, including his Jewish band-mate Matt Gross.
– The 2002 shooting by an Egyptian-born Islamist at the El Al desk at Los Angeles International Airport, killing two.
– The 2003 arson devastation of the Candles Holocaust Museum in Terre Haute, Indiana, by a white supremacist.
– The 2006 shooting attack on the Seattle Jewish Federation offices by a Pakistani-American, killing one, Pamela Waechter, and wounding six others.
– The 2009 killing by a white supremacist of a security guard at the U.S. Holocaust Memorial Museum in Washington, D.C.
– The 2014 shootings by a neo-Nazi outside the Kansas City Jewish Community Center and seniors’ home, killing three non-Jewish bystanders.

The reason for the sudden emergence of organized anti-Jewish violence as a trend four decades ago remains obscure. Whatever spawned it, though, the subsequent history offers several important lessons for today. For one thing, the hard numbers undermine the typical narratives offered by commentators, liberal and conservative alike, to explain anti-Semitic violence. Each side likes to emphasize the threat posed by one type of attack — conservatives say it’s Islamism, liberals say white supremacists — and to downplay the other. In fact, both ideologies pose serious, ongoing threats to Jewish safety. Both sides are right, and both are wrong.

And then there’s this: Consider the Pittsburgh massacre in the context of the week that preceded it. It was a week in which violent, anti-Semitic extremists of the far right grabbed headlines from coast to coast and in between. While a far-right extremist was plotting to massacre Jews in Pittsburgh, the FBI was arresting multiple violent far-right extremists with openly anti-Semitic views for alleged violent attacks on critics of President Trump.

Most discussed was the arrest in Florida of suspected pipe-bomb terrorist Cesar Sayoc, whose anti-Semitic, homophobic and racist views were plastered all over his van. Less noticed were the arrests in California of three neo-Nazis in the so-called Rise Up Movement. They were wanted both for involvement in last year’s Charlottesville Unite the Right march as well as for a string of physical assaults on anti-Trump demonstrators in California.

A third group of pro-Trump brawlers, the Proud Boys, known for its extreme racism, white and Christian nationalism as well as homophobia and occasional anti-Semitism, is currently being rounded up by the New York Police Department for apparently initiating an October 12 street brawl outside a Manhattan Republican club. The fighting followed an address to the Republicans by Proud Boys leader Gavin McInnes, in which he said Republicans “need us foot soldiers” and that “we both want Trump to do well.”

Summing up the week’s events: the arrests of anti-Semitic far-rightists Sayoc in Florida, Rise Up in California and Proud Boys in New York, all on charges of pro-Trump violence, and all capped by the worst anti-Semitic massacre in American history. Taken together, they hint inescapably at the threat posed to American Jews, whatever their political views, by the growth of far-right violent extremism at the fringes of Donald Trump’s base, with his subtle and not-so-subtle encouragement. Trump denies any responsibility and closes his eyes. We dare not.

J.J. Goldberg is an editor-at-large for the Forward. Follow him on Twitter at @jj_goldberg or email him at Goldberg@forward.com