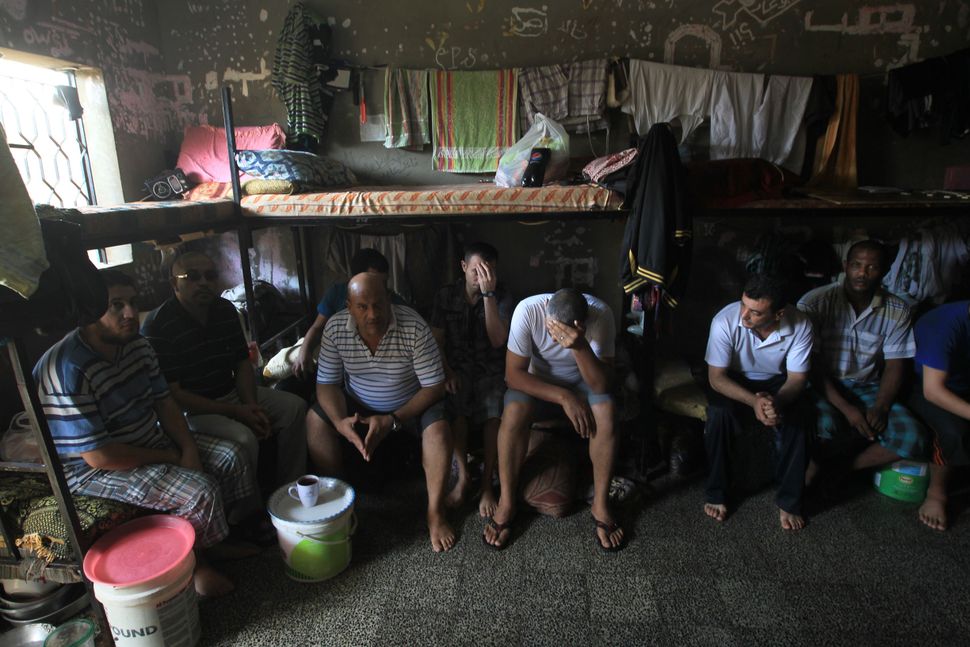 Anyone with even a passing interest in news from the Middle East will know that all over the region, undemocratic and repressive regimes use their security forces to suppress dissent. The Palestinian authorities in Gaza and the West Bank are no exception, as a recently released Human Rights Watch report documents.

Considering that the report is “the result of a two-year investigation,” it is remarkably meager. According to the summary, HRW exposes the “machineries of repression to crush dissent” by showing that Palestinian authorities in the West Bank and Gaza “routinely arrest people whose peaceful speech displeases them and torture those in their custody.”

While this might give the impression that the report focuses exclusively on the abuse of people arrested for “peaceful speech,” there are also chapters that deal with cases of people accused of criminal charges in Gaza and the West Bank.

But what the report leaves out is perhaps more noteworthy than what it covers. A glimpse of what’s missing is provided on page 51, where one sentence suffices to deal with the most egregious abuses:

“Hamas authorities have also carried out 25 executions since they took control in Gaza in June 2017 [sic! Hamas took control in June 2007], including 6 in 2017, following trials that lacked appropriate due process protections and courts in Gaza have sentenced 117 people to death, according to the Palestinian Center for Human Rights.”

In other words, a report that is touted as “the result of a two-year investigation” relies on another human rights organization to provide a one-sentence summary of executions carried out by Hamas. Presumably, two years were too short for the hard-working people at HRW to check their own records, which indicate that Hamas carried out considerably more than “25 executions” since taking power in 2007.

But the appalling sloppiness displayed by HRW when it comes to keeping track of the murderous record of the Islamist terror group that rules Gaza is a telling sign of how little Palestinian human rights matter to HRW when Israel can’t be blamed.

Even a cursory check reveals that according to a HRW report from 2009, Hamas “attacks on political opponents and suspected collaborators in Gaza… killed at least 32 Palestinians and maimed several dozen more.”

Ignoring these “attacks” that “killed at least 32 Palestinians,” a HRW report from April 2012 claims that since taking power in 2007, “Hamas authorities in Gaza have executed at least 11 men, including five in 2010 and three in 2011.”

So at this point, there are at least 43 Palestinians who were killed by Hamas after its violent seizure of power in Gaza in 2007.

A year later, HRW noted that in the fall of 2012, “seven Palestinian prisoners accused of collaboration with Israel” were “executed on a public street. One of the men’s bodies was dragged behind a motorcycle.”

That makes at least 50 Palestinians killed by Hamas, or with the acquiescence of Hamas.

Another HRW report from early 2015 notes that during the fighting with Israel in the summer of 2014, “unidentified men in Gaza executed 25 Palestinians accused of being ‘traitors’ for Israel.”

That would make 75 Palestinians killed by Hamas, or with the acquiescence of Hamas, by early 2015.

Yet, when the BBC reported on three executions in Gaza in May 2016, we learn that HRW stated that “more than 40 people have been put to death in Gaza since 2007, including 23 suspected collaborators during the 2014 war with Israel. Most of those executed were convicted in military courts or executed summarily, without a judicial ruling.”

Note that in 2015, HRW said that “25 Palestinians accused of being ‘traitors’ for Israel” were executed; a year later, it was only “23 suspected collaborators” who were killed.

Moreover, HRW claims that only “40 people have been put to death in Gaza since 2007” even though its own reports and statements indicate that at least 75 Palestinians were killed by Hamas or affiliated individuals or groups.

If we add the three men executed in May 2016, the count of Palestinians killed by the terror group or its affiliates goes up to 78. Another six have to be added from the executions carried out by Hamas last year.

In April 2017, three Palestinians “accused of collaborating with Israel” were executed. HRW reportedly condemned the executions as “abhorrent” and, rather bizarrely, Sarah Leah Whitson, executive director of the Middle East and North Africa Division at HRW, advised Hamas that by executing people, they projected “weakness, not strength.”

But the Islamist terror group apparently decided to disregard Whitson’s recommendations about how to project “strength” and proceeded to execute another three Palestinians a few weeks later. The three men were accused of assassinating a Hamas military commander and of “collaborating with the Zionist enemy.”

As noted in a news report, hundreds of onlookers were allowed to watch the executions, and for those who couldn’t attend in person, a Gaza news site provided a livestream on their Facebook page.

Since the three men who were executed had been arrested only two weeks earlier, HRW reportedly declared that “the ‘rush’ to kill the men ‘smacks of militia rule, not the rule of law’.”

Given the fact that Hamas is an Islamist terror group, one can only wonder why HRW would have any illusions about their respect for the rule of law.

However, the fundamental problem remains that a report advertised as exposing the Palestinian “machineries of repression to crush dissent” has nothing to say about the numerous killings of political foes by Hamas. When it comes to crushing dissent, the killing of one’s political opponents would seem to be a particularly forceful and frightening part of any “machinery of repression.” Yet HRW obviously can’t even be bothered to keep track of, or provide consistent figures on how many Palestinians were killed by Hamas.

Of course, HRW could argue that the report’s subtitle, “Arbitrary Arrest and Torture Under the Palestinian Authority and Hamas,” excludes executions and extra-judicial killings of political opponents. As it happens, this is a very convenient exclusion if you want to publish a report that treats the Islamist terror group Hamas that seized power by force as no less legitimate than their staunch opponents in the Palestinian Authority (PA), which – rightly or wrongly – enjoys considerable international legitimacy.

As a result of this contrived symmetry, the HRW report includes parallel sections with recommendations for Hamas and the PA about how to improve; likewise, HRW urges states that give financial and political support to use their leverage. In the case of Hamas, this means that HRW suggests asking Qatar, Iran, and Turkey to press the Islamist terror group they support to respect human rights.

It’s up to you if you want to laugh or cry.

Last but not least, it’s important to realize that Palestinians who have commented on the HRW report don’t mind at all that it ignores the dozens of their compatriots killed by Hamas. For example, writing in these pages, Muhammad Shehada blames Israel.

But the perhaps most revealing Palestinian commentary comes warmly recommended by Omar Shakir, the HRW Israel and Palestine Director. According to Shakir, an Al Jazeera op-ed written by a member of the Palestinian Policy Network Al-Shabaka provides “vital context.”

Unsurprisingly, the op-ed also argues against “placing the onus solely on the Palestinian leadership” and insists that the HRW report “needs to be considered in the wider political and historical context which has facilitated these abusive regimes.”

But while the “abusive regime” established by Hamas merits just one sentence, much of the article is devoted to arguing that the problem is really the PA and its security cooperation with Israel “under the false auspice of preventing terror.”

If you need an even more unmistakable give-away, the author asserts that the PA exists “to contain and maintain the Palestinian populations in the 1967 territories.” As a long-time anti-Israel activist, Omar Shakir knows full well, when activists talk about “1967 territories”, i.e. the West Bank and Gaza, they indicate that there are also the “1948 territories,” i.e. Israel before the Six Day War in 1967, and that both “territories” rightly belong to the Palestinians.

It goes without saying that nobody who hopes to eliminate the world’s only Jewish state would want to be too harsh with the Islamist terror group that exists for precisely this purpose.