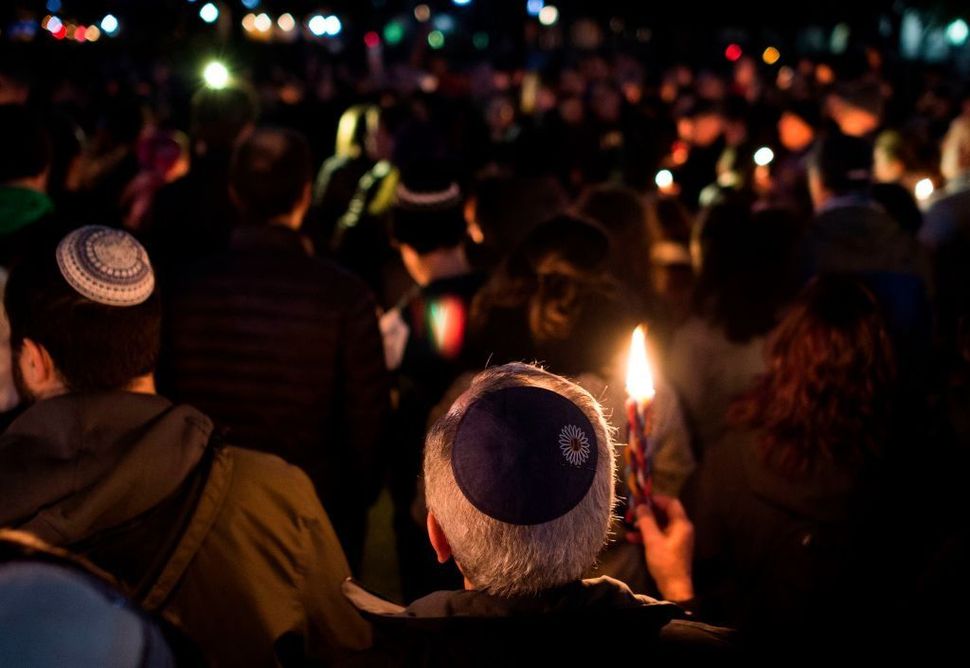 Members and supporters of the Jewish community come together for a candlelight vigil, in remembrance of those who died earlier in the day during a shooting at the Tree of Life Synagogue in the Squirrel Hill neighborhood of Pittsburgh, in front of the White House in Washington, DC on October 27, 2018. Image by Getty Images

In the aftermath of the Tree of Life massacre in Pittsburgh, the argument over the source of danger to American Jews — the social justice left or the right’s white nationalist movement — is over.

Right-wing anti-Semitism and white nationalism pose the single greatest threat to the safety of the American Jewish community. Our response as Jews must reflect that reality.

The chant of “Jews will not replace us” in Charlottesville was no accident. The starting point of white nationalism shares the same dark fantasy as the Protocols of the Elders of Zion: a secret superstructure of Jews plotting to undermine white Christian society through money, the manipulation of the media and through the leverage of political allies.

The practical endpoint of this worldview is the destruction of Jews through expulsion, murder or conversion.

And, in the past few years, this theory has moved alarmingly from the fringes of society to the center.

What was once only found on the darkest corners of Reddit or sites like 4chan has been echoed in recent talking points and closing campaign ads for the Republican Party in North Carolina and California, dozens of state legislative races and Republican Congress members like Steve King.

The contemporary myth of Jewish conspiracy as embodied by George Soros — so recently understood as an emissary of American democracy in Eastern Europe — is so pervasive that even Facebook tried to discredit its opponents with a Soros smear PR campaign.

In recent months, members of the Republican Party also publicly imagined Soros — a Jewish philanthropist and the right’s leading bogeyman — as the orchestra conductor of both the Kavanaugh protests and the caravan of migrants from Central America to the US border.

This idea has been reinforced through conspiracy theory statements from Senator Charles Grassley and House Majority Leader Kevin McCarthy.

There’s a fatal endpoint to normalizing the targeting of “the other” and blaming the Jews. According to President Trump and his party, the refugee caravan threatens the lives of Americans. And according to Robert Bower, an avid follower of white nationalist propaganda, the Jews responsible for this threat to white Christian America had to be stopped.

On October 27, Bowers entered the Tree of Life synagogue in Pittsburgh, one of the synagogues involved in HIAS’s campaign to “welcome the neighbor” and murdered 11 praying Jews.

This devastating tragedy was sadly an unsurprising outcome for the white nationalist ideology from which it emerged.

That the white nationalist movement is still rising and strengthening should be concerning to all Americans, and Jews everywhere.

Yet even in the face of this very real, growing and terrifying threat, large portions of the Jewish community in the United States continue to hang onto to a facile “both-siderism” when it comes to anti-Semitism.

In the wake of the Pittsburgh shooting, some Jewish leaders have doubled down on their efforts to inflame campus disputes over BDS. Others have spilled barrels of electronic ink attacking the leadership of the Women’s March — who are, not coincidentally, black and brown.

Robert Bowers made no mention of Israel on his social media posts, yet in the days following the shooting, there are sections of the Jewish community for whom Palestinian American activists once again became public enemy number one.

This needs to stop. This is not just misguided; it is dangerous.

Anti-Semitism may appear in certain tangential strands of U.S. leftist ideology but it is certain not its animating force. Indeed it is almost universally understood to be antithetical to our social justice movements.

White nationalism, though, is animated by anti-Semitism. It is core to far-right ideology. It bears repeating: the ideological endpoint of this worldview is the destruction of Jews through expulsion, murder or conversion.

When American Jews lash out against the left instead of the right in this moment, it is at best a terrified community trying to win a fight wherever it can.

At worst, it is the manipulation of a tragedy for a nationalist agenda, whether rooted in the Israeli far-right or the American far-right.

Somewhere in the middle is a Jewish community deeply confused about who are our allies and who are our foes in our struggle to survive.

Whatever the intent, the impact is millions of dollars and infinite hours wasted on fighting the wrong enemy and a deepened alienation between the Jewish community and our most likely allies: Other people also targeted by white nationalists for death, control or expulsion.

I have been around the social movement left for two decades, and I can tell you without a doubt anti-Semitism lives within the American left — just as the left is also filled with racism, sexism, Islamophobia and every other form of oppression found in American society.

It is American, after all.

That is absolutely not saying we should excuse it. Indeed I have spent much of the last six years educating individuals and organizations on the left on the mechanisms and impacts of anti-Semitism.

But I can also tell you that there is no contingent of the American left that is trying to kill Jews or spread an ideology whose end result is the elimination of Jews.

The endpoint for the vast majority of the social movement left is a multiracial, pluralistic democracy in which all people’s basic needs are met.

As Americans and as Jews, the only sensible choice is to join people working for a multiracial, pluralistic democracy.

We make up 2% of the US population and even less worldwide; we cannot build a future for ourselves by ourselves.

We need pluralistic democracy to emerge stronger and more expanded from our current crisis.

For American Jews, this means being in the fight for democracy no matter whom else is on our side.

The midterms and international developments have made it plain: There are only two sides now. There are those who will fight for a democracy that keeps us safe, and those who will use every avenue to shut down democracy for their own nefarious ends — from the war on immigrants and refugees to consolidation of wealth unseen since the Great Depression to, yes, bringing on End Times.

I know which side I’m on, not despite the fact that I’m a Jew but because of it.

Each of us must choose which side we are on: I stand with those fighting for democracy and those fighting to defend and expand it. Is it hard, sometimes, to stand here? No question. Do some people wish I weren’t here? Sure. But they cannot dislodge us. I invite you to join me in standing firm. I know our survival — as Americans, and as Jews — depends on it.

Dove Kent is the former director of Jews for Racial & Economic Justice. She was in Pittsburgh following the shooting at the Tree of Life synagogue to support the local Jewish activist community.