Anti-Semitic Environmentalism Is The Latest Social Justice Threat To Jews 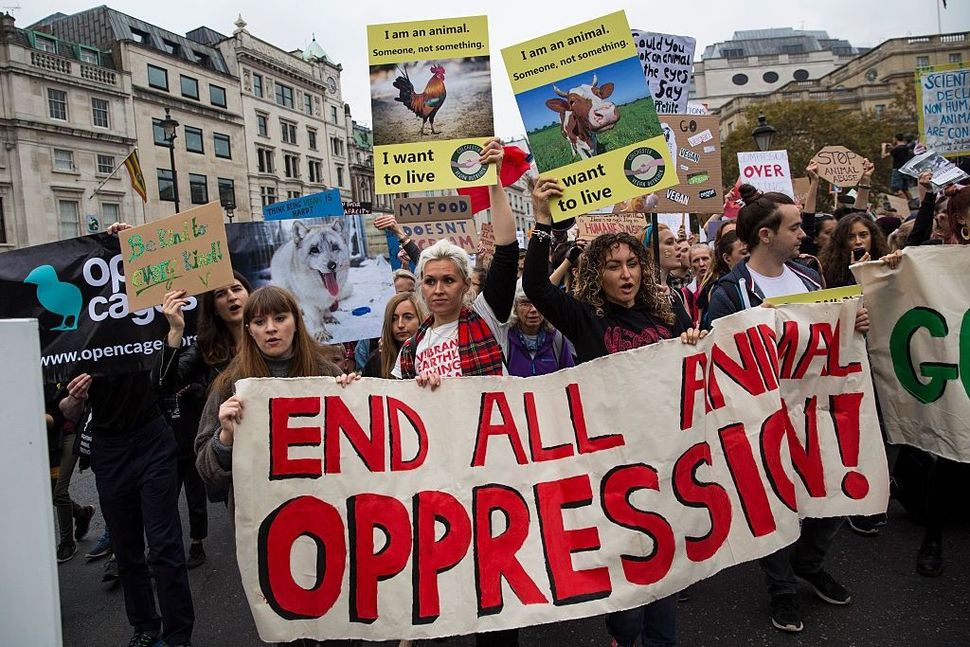 Protesters carry placards and banners during an animal rights march on October 29, 2016 in London, England. Hundreds of protesters and activists march through central London today calling for greater animal rights and encouraging people to go vegan. Image by Getty Images

As a young writer living in California, I find progressive spaces are practically unavoidable. I can’t walk down Santa Monica without someone suggesting I try veganism, nor go to my screenwriting group without a colleague suggesting I add a President Trump joke because Hollywood is all about the resistance.

As an intersectional feminist, you’d think I’d want to seek progressive places out. Hell, I’m a bisexual woman who’s organized marches against sexual abuse. But at the end of the day, the identity I hold closest to my heart, or at least my heart rate, is my Jewish one.

Many progressive spaces, which in theory exist to expand inclusion and kindness, have become strange potholes for anti-Semitism that have made it increasingly difficult for me to drive down my path of social justice. It’s almost inexplicable how many people in movements that are rooted in morality seem to randomly hate Jewish people.

For example: The environmentalist movement. As a Jewish writer, I have received more unchecked anti-Semitic hate mail from vegans than Neo-Nazis. In animal rights circles, it’s become commonplace to claim that there is an “animal Holocaust” and for vegans to share disturbing images of murdered Jews at Auschwitz paired side by side with a pile of slaughtered pigs.

A few months back, I made the argument that animal rights advocates should not compare factory farming to human slaughter. Comparing Jews to pigs is blatantly hateful and disrespectful to the souls lost at the hands of genocide. Since coming down against using the deaths of my family to advocate for a plant-based diet, I’ve been called a “human supremacist” and chastised for thinking Jews should be centered over animals.

Anti-Semitic environmentalism is now threatening Jews on a global scale. Earlier this month, progressive advocates succeeded in getting kosher slaughter banned in Belgium, making it nearly impossible for observant Jews to live in the country, which pleased both vegans and white supremacists alike.

This law presents a choice for Belgian’s 40,000 Jews — assimilate or get the hell out. It’s just short of ethnic cleansing, in a country where my step-grandmother had to be hidden by nuns to escape Nazis. These environmentalists advocate for the dignity of all life — unless it’s Jewish.

But it isn’t just crazed conservationists who have been found with anti-Semitic biases in progressive spaces. Many groups centered in LGBTQ liberation have this problem, too. The catastrophe at last summer’s Chicago Dyke March, in which organizers ousted queer Jewish women for carrying rainbow flags with Stars of David on them, sparked outrage from both Jewish and LGBTQ outlets alike.

Those lesbian activists, whose anti-Zionism was blatantly just anti-Semitism, were so upset by the criticism, they launched a campaign to raise $5,000 for a self-care retreat. Yes, really.

In their weekly protest, they proclaim owner Manny Yekutiel, who employs formerly incarcerated workers, subsidizes the entire building with his rent and holds free events with organizers of social justice movements, is a “Zionist and a gentrifier.” They intend to do so until he is exiled from the neighborhood.

The need to drive out Jewish businesses, even through hate crimes (the cafe was vandalized with anti-Semitic, anti-Israel slogans) is not what you’d expect from the people at a Pride parade. But, then again, would you expect drag queen Manila Luzon to wear a prosthetic Jew beak on a show as focused on inclusivity RuPaul’s Drag Race — and win the challenge?

Anti-Semitism isn’t just coming from fringe advocates for queer people or the environment. It’s being spread by the progressive movement’s leaders themselves. While Women’s March leader Tamika Mallory was taking snapshots of herself embracing Louis Farrakhan, Labour UK Premier Jeremy Corbyn was attending countless conferences and protests with other unapologetically Jew-hating leaders.

Why? These are people who campaign for human rights. Their mission is to make the world a better place for all minorities (and trust me, these vegans think animals are minorities). Why not Jews?

Because to the anti-Semitic corners of the left, Jews are the oppressors, not the oppressed.

Because the same tropes that make right-wing hate-mongers waving tiki torches chant “the Jews will not replace us” fuel anti-Semitism amongst progressives waving incense.

Amongst Women’s March leadership, Nation of Islam, and their followers, Jews are the oppressors of African Americans who orchestrated the slave trade. To animal rights activists, we are the monsters responsible for the death of animals.

To Jeremy Corbyn and some LGBTQ activists, Jews are painted in the same light white supremacists shine on us — but instead of oppressing white people, we’re murdering Palestinians.

This is the painful nuance of blood libel — it morphs for the party using it against Jews.

It’s essential to note that progressive anti-Semitism is not the biggest threat Jewish people face today. We cannot forget that right-wing bigotry has resulted in real violence in the murder of 11 Jews in Pittsburgh and the murder of a protestor in Charlottesville, Virginia. It does not just victimize us, but countless other marginalized groups.

The real tragedy of anti-Semitism in social justice movements is that it leaves Jews homeless in our essential need to fight injustice for all peoples.

When the left and right hate you, the only place to march is forward.

Anti-Semitic Environmentalism Is The Latest Social Justice Threat To Jews