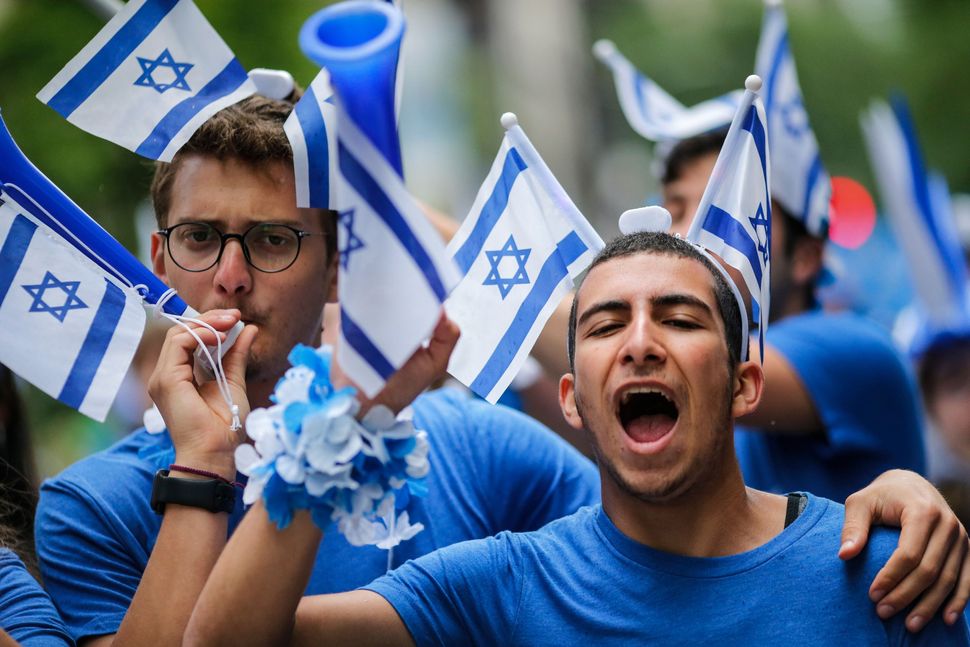 Every time a Jewish leader grandstands against the anti-Semitic canard of “dual loyalty,” I groan.

Not because this trope is not real. For all of Jewish history, anti-Semites have justified persecution by claiming Jews are more loyal to each other than their home countries. And recent anti-Semitic attacks, like the one at the Tree of Life synagogue in Pittsburgh last year, have been driven by conspiracy theories about a cabal of Jewish “globalists” like George Soros seeking world domination.

No, what frustrates me is how Jewish leaders—from local rabbis to the American Jewish Committee—condemn legitimate criticism of Israel by people like Rep. Ilhan Omar as “dual loyalty,” while simultaneously making allegiance to Israel a requirement for American Jewish life.

I should know; I saw this firsthand at my Jewish high school.

Israel was everywhere at the Jewish day school I attended in New York. The Israeli and American flags were proudly displayed together, no matter that I, like the majority of my classmates, was not Israeli.

This alone might be innocuous, a loose cultural affinity that would be familiar in a French or German language academy. But in Jewish day school life, outright political mobilization for Israel and its policies was a requirement.

Every year we would be “strongly encouraged” to attend the Salute to Israel parade on New York’s Fifth Avenue. Teachers were marshals, and mocking stories about pro-Palestinian activists were exchanged in class the following day.

One year, we were outright required to join a protest in support of Israel, during the school day, at the United Nations.

This school-mandated allegiance seeped into even the most casual conversations. I remember once debating with my group of friends whether we’d rather serve with the Israeli Defense Forces or the U.S. military. Even though all of us, and our parents, were born and raised in the United States, we were unanimous: we’d rather fight for Israel.

With any other cultural group in America, for any other country, these statements would be shocking. After all, when was the last time you heard of an Italian-American birthright trip to Sicily? But for American Jews, the centrality of allegiance to Israel in our communal organizations is the norm.

And it’s not limited to Jewish schools. I have heard similar stories from friends who went to Jewish summer camps, like the Conservative movement’s Camp Ramah, whose one-sided education of the Israeli-Palestinian conflict has been subject to protests from young activists with the anti-Israeli occupation Jewish group IfNotNow.

My college friends led a campaign against Hillel International, the largest Jewish campus organization in the world, for not allowing chapters to invite anti-Israel speakers.

Even at synagogues, allegiance to Israel has literally become part of the Jewish liturgy, with many congregations, including the one I attended as an adolescent, saying the Prayer for the State of Israel immediately before the prayer for the United States every Saturday.

At a time when anti-Semitism is on the rise in this country and blank-check political support for Israel is being challenged, it is more important than ever to maintain the difference between American Jewry and Israel.

Jewish leaders need to step up — not because Jewish victims are responsible for anti-Semitism, but because our community’s leaders have an obligation to advance the interests of American Jews. Obligatory support for Israel does the opposite.

For example, the Jewish Federations — local foundations that fund American Jewish religious and communal organizations — need to take a strong stance on separating Israel from Jewishness. The fact that my federation-funded high school’s mission statement includes a commitment to “the centrality of the State of Israel to Jewish identity and to the Jewish people” undermines the distinction between being Jewish and supporting Israel.

And this distinction is very real among rank-and-file American Jews. According to a Pew Research survey from 2013, less than half of American Jews said caring about Israel is an essential part of what their Judaism means — far lower than the share who tied their Judaism to “leading an ethical life.”

And with liberals and Democrats — groups that Jews overwhelmingly identify with — expressing record-low approvall of Israel, the trend of Jews moving away from Israel is only getting stronger.

Take my Jewish friends today. Most of us attended Jewish day schools and still are still closely involved in Jewish life. We go to synagogue, celebrate holidays, and read Jewish news sources.

But we also see our Jewish identity as fully separate from Israel. Our politics, which can include supporting the Boycott, Divestment, and Sanctions movement (BDS), are driven by Jewish values of ethics and morality rather than blind political loyalty to a foreign country.

Ilhan Omar gets that. It’s time for American Jewish leaders to catch up.

Aaron Freedman is a writer based in Brooklyn, NY. Follow him at @freedaaron