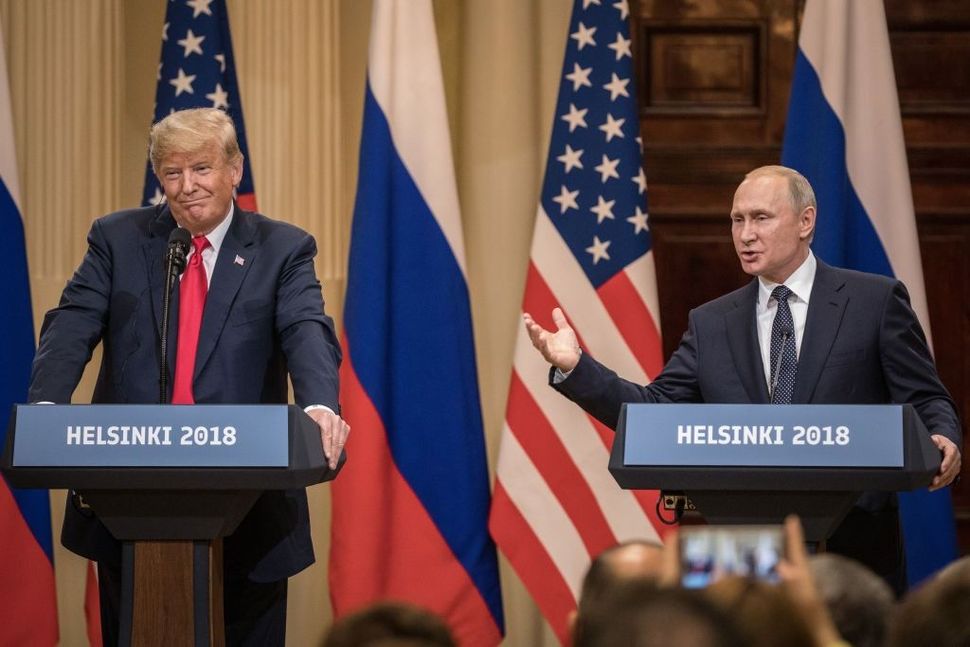 These days, reckless analogies are rampant, and not just in the Donald Trump White House.

After the Robert Mueller investigation disproved collusion between the Trump campaign and Moscow, the White House sent a letter to media producers, naming six prominent Russian collusion promoters, and asking outlets to consider their trustworthiness when inviting them on.

In response, Congressman Eric Swalwell, who was named in the letter, tweeted: “First they came for the journalists. Then they came for the elected officials expressing legitimate concerns about justice in our country and attacks upon our democracy. Who’s next?”

First they came for the journalists.

Then they came for the elected officials expressing legitimate concerns about justice in our country and attacks upon our democracy.

Swalwell was paraphrasing Pastor Martin Niemöller’s haunting poem about Germans standing on the sidelines as the Third Reich rounded up enemies of the regime, including, of course, Jews.

A powerful member of Congress comparing himself to vulnerable groups in a dictatorship is an immensely inappropriate analogy, especially considering there are currently immigrants living in fear of being detained by ICE raids.

Unfortunately, Swalwell’s Third Reich comparison is emblematic of a larger pattern. Over the past two years, Russia collusion hysteria led politicians and analysts to cavalierly equate Russian election meddling to the Holocaust, the September 11 terrorist attacks, and the Japanese bombing of Pearl Harbor.

“Putin’s Attack on the U.S. Is Our Pearl Harbor,” proclaimed the headline to a Politico article, which went on to throw in a gratuitous comparison to September 11 for good measure.

“I would say that his performance today will live in infamy as much as the Pearl Harbor attack or Kristallnacht,” said an MSNBC contributor, referring to Trump’s meeting with Vladimir Putin in Helsinki last year.

Similar comparisons were tweeted out by prominent analysts, historians, and politicians, including Senator Bob Menedez and Swalwell.

Such analogies cheapen not just the victims’ memory but our national discourse.

First, the exaggerations are unnecessary. It’s safe to say the majority of Americans are aware of and incensed by Moscow’s meddling in the 2016 election. But there’s a world of a difference between Facebook ads and the murder of thousands of Americans, to say nothing of the Holocaust.

The military, rescue personnel, and civilian victims of Pearl Harbor and September 11 were slaughtered – not hacked, not duped, not distracted, robbed, or meddled with, but slaughtered. At best, calling the Russian election attack another September 11 betrays an insulting lack of perspective, akin to that of a bored teenager who claims sitting through algebra class is “literally torture”.

Avoiding gratuitous comparisons is especially important today, when we are witnessing widespread distortion of once-sacred tragedies. Last year, Poland was embroiled in a scandal over a law that whitewashed Polish involvement in the Holocaust. Similar campaigns are unfolding across Eastern Europe, where glorification of Nazi collaborators and SS units is rampant. Meanwhile, Russia is seeing a resurgence of the cult of Stalin, while in America, defenders of the Confederacy are exonerating slavery.

This climate calls for added vigilance and care in staying away from inappropriate analogies. Never Forget – whether applied to the Holocaust, Pearl Harbor, or September 11 – is not a passive concept. It extends beyond slapping on a bumper sticker or putting a black ribbon on a website. Never Forget is a call for the living to do what the dead cannot – guard their memory from appropriation, even if that appropriation is driven by justified outrage over an effort to influence an election.

We can do better in keeping that sacred duty.