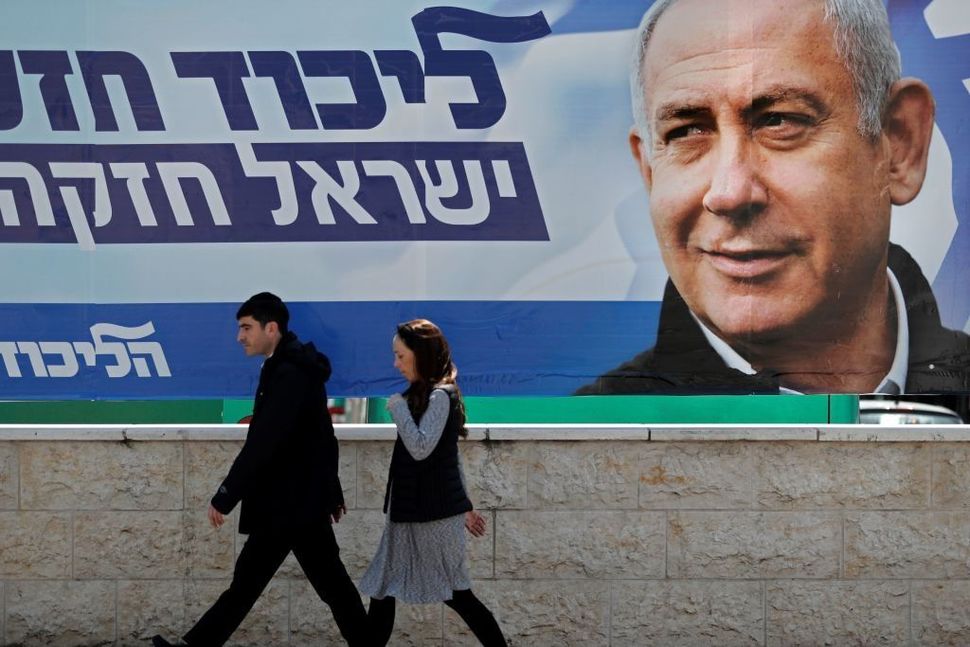 We will know soon enough whether Prime Minister Benjamin Netanyahu’s shocking declaration in favor of extending Israeli sovereignty into the West Bank will motivate enough voters in Tuesday’s election to propel him to an unprecedented fifth term in office.

But we already know this: He’s got one segment of the population in his electoral pocket — Israel’s youngest Jewish voters. And this political development could have longer-term implications for the fraught relationship between Israel and American Jews.

Just as many young Jews here are more willing to challenge the establishment and criticize Israel’s policies — even its very existence — their counterparts in Israel are racing away from their elders and toward the opposite end of the political spectrum.

According to a poll released last week by the Guttman Center at the Israel Democracy Institute, Netanyahu’s main rival in tomorrow’s vote — former army intelligence chief Benny Gantz, who heads a centrist coalition — is favored by a majority of Israelis 65 years and older. Gantz beats Netanyahu 53% to 35% in that age group, and he edges past the prime minister among voters ten and twenty years younger, too.

A combination of demographic and sociological factors, intensified by Netanyahu’s deep instinct for political survival, have turned young voters into his greatest advantage. Whether that is enough to enable him to form the next government we may not know for several days or weeks. But the political shifts are real and consequential.

In the same way that Americans who came of age during Barack Obama’s presidency may have grown up believing it was normative to have an African American family in the White House, younger Israelis have had their sensibilities shaped by a man who has dominated the political landscape since early 2009 — and that doesn’t even count his first term in office, in the late 1990s.

“Many young people do not remember Israel without Netanyahu,” Yair Ettinger, a research fellow at the Shalom Hartman Institute of North America and an expert on Israeli religious politics, said in a phone interview. “This is the challenge of Benny Gantz.”

Indeed, it will be the challenge of any leader who succeeds Netanyahu — for even if he is able to form the next government, he faces a slew of legal accusations that could fatally endanger his time in office.

The rightward trend among Israelis spans many age groups, with more than 50% of the population self-identifying as right wing supporters, Yohanan Plessner, IDI’s president, told me in an email.

“This trend is augmented among the religious sectors,” he said. “Keeping in mind that first-time voters are greatly influenced by their family and home environment, and given the disproportionate demographic growth of the ultra-Orthodox population, the logical conclusion is that current rightward trends are expected to continue.”

There’s an echo of those trends in America, where we see a growing Orthodox population with large families and strong voting habits that increasingly view President Trump as Netanyahu’s very best ally. (After all, Trump’s recent recognition of Israeli sovereignty of the Golan Heights set the stage for Netanyahu’s latest annexation vow.)

Still, the majority of American Jews remain politically liberal, and according to the 2013 Pew Research Center survey of American Jews those 18 to 29 are the most hopeful about a two-state solution. In the absence of genuine peace negotiations, they are more willing to criticize Israel and distance themselves from its policies.

Just as young voters here only know Israel as an economic and military power, an occupier rather than a fledgling state, the next generation of voters in Israel was born after Prime Minister’s Yitzhak Rabin’s assassination and in the shadow of Palestinian terror campaign in the early 2000s, the Second Lebanon War and the intermittent fighting in Gaza.

“Many young voters are hard liners,” Ettinger observes. “They can’t imagine the option of any kind of settlement with the Palestinians, while older voters can imagine that.”

Younger Israelis can’t imagine it in part because their exposure to Palestinians is far more limited than their elders’. The security barrier that slices through the West Bank has reduced terrorism, absolutely, but it has also left the two populations more isolated from one another and therefore more suspicious and hateful.

“The hope or yearning for peace is foreign to them,” Plessner acknowledged. “Our youngsters have experienced a decade of consecutive right-wing governments and never gained exposure to any other reality.”

I suspect that, if Netanyahu does prevail again, it won’t only be younger American Jews who feel estranged from his muscular nationalistic, anti-Palestinian, anti-pluralist, indeed anti-democratic politics. But the fact that the next generation in each of the world’s largest Jewish communities is moving in opposite political directions is one more reason to question how they will see each other in the future, whenever that arrives.

Jane Eisner is a Forward writer-at-large and the Koeppel Fellow in Journalism at Wesleyan University. Contact her at [email protected]