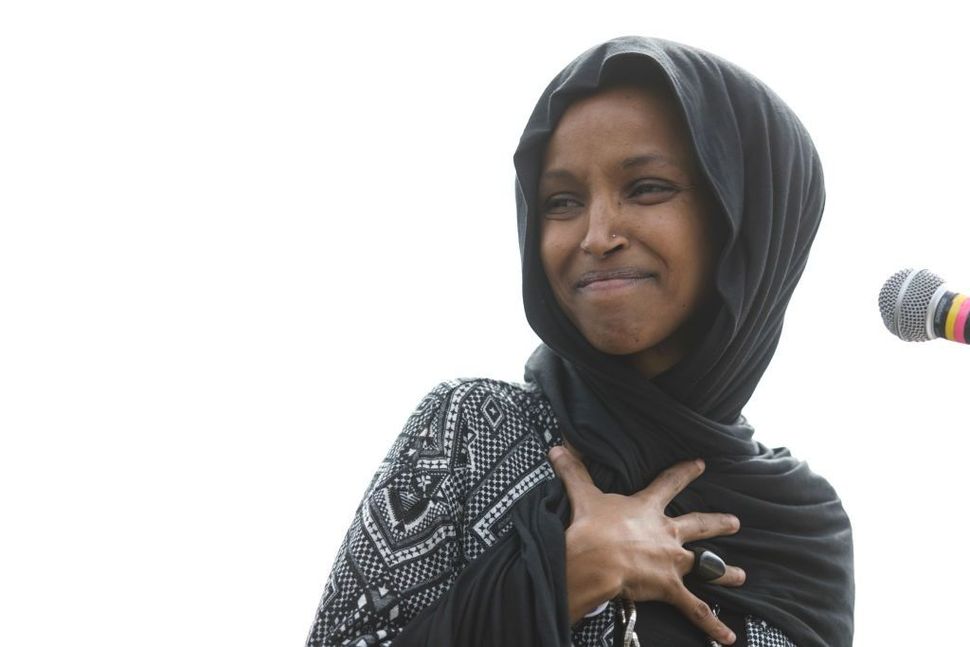 WASHINGTON, DC - MARCH 15: Rep. Ilhan Omar, D-Minn attends a Youth Climate Strike on March 15, 2019 on the West Front of the U.S. Capitol in Washington D.C. Students around the world took to the streets on March 15 to protest a lack of climate awareness and demand that elected officials take action on climate change. (Photo by Tom Brenner/Getty Images) Image by Getty Images

Donald Trump’s ongoing attacks on Representative Ilhan Omar — including his shameless attempt to twist her words to imply that she was at best apathetic about the 9/11 attacks — should provoke some soul-searching among US Jewish leaders and opinion formers.

WE WILL NEVER FORGET! pic.twitter.com/VxrGFRFeJM

As a hijab-wearing woman born in Somalia and as one of the first two Muslim-American women to serve in Congress, it was inevitable that Omar would be in the crosshairs of the Islamophobic right as soon as she was elected. But there’s no doubt that the reaction to her ill-advised comments earlier this year criticizing “allegiance to a foreign country” among pro-Israel lobbyists, which recalled anti-Semitic tropes about Jewish “dual loyalty,” provided a golden opportunity for those who would attack her for who she is, regardless of what she says.

Before Nancy, who has lost all control of Congress and is getting nothing done, decides to defend her leader, Rep. Omar, she should look at the anti-Semitic, anti-Israel and ungrateful U.S. HATE statements Omar has made. She is out of control, except for her control of Nancy!

While criticism of Omar’s words did not necessarily start out as Islamophobic, there’s no doubt that that is where the criticism has ended up. One of the defining features of both racism and anti-racism today is its selectivity, or what I call “selective anti/racism.”

Certain minorities are selected for anti-racist protection and others for racist attack. So it is that the unconcealed or barely-concealed racist and Islamophobic poison directed at Omar from the Republican right is often framed as a defense of their favored minority — the Jews — against anti-Semitism.

Whatever their political views are, Jews shouldn’t be fooled by this apparent anti-anti-Semitism. The use of anti-anti-Semitism to provide an alibi for other forms of racism turns us into objects rather than people, in the same way that anti-Semitism itself does. Jews are being treated as a tool to be weaponized against the despised black, Muslim, female other.

None of this means that Omar’s comments earlier this year were not problematic; they needed to be called out. But in this era of selective anti/racism, Jews need to rethink how to do this.

Although in most other respects the British-Jewish anti-Semitism does not offer positive lessons for the US, there was one episode in the UK that offers a better model for how Ilhan Omar should have been approached.

In 2016, a Muslim Labour Party MP, Naz Shah, who was born in Britain but whose family originates from Pakistan, was engulfed in controversy when a blogger discovered she had shared a Facebook post from Norman Finkelstein. The post consisted of a map suggesting Israel be relocated to the US. This and other problematic posts led to her suspension from the party.

Yet Naz Shah, despite being “exposed” by a right-leaning non-Jewish blogger, and despite the heated controversy over anti-Semitism in the Labour Party, never became the cause celebré that Omar has become. She apologized fulsomely and explained that she’d learned a lot in the years since she posted the material. Jewish community leaders reached out to her and she reached back in return. Shah’s suspension was eventually lifted and she is no longer a point of contention in the fraught relationship between the Labour Party and the Jewish community.

To be clear here, the lesson I am not drawing is that if only Omar were to apologize, then everything will be okay. For one thing, she has apologized. In any case though, the abuse she is facing from the Islamophohic right could not be assuaged no matter what she was to say.

Instead, the lessons I draw from the Naz Shah case are lessons for the “mainstream” Jewish community; that is, the bulk of the Jewish population that, in the US as in the UK, is broadly supportive of Israel and broadly liberal in its politics. While I myself have much sympathy with those sections of the US Jewish left that has been highly supportive of Omar, in order to fight selective anti/racism, there needs to be buy-in from Jews beyond the radical fringe.

The first lesson is that when anti-Semitic tropes are reproduced by those who are themselves members of minorities that are vulnerable to racism, this needs to be treated subtly differently to anti-Semitism from the white majority. That isn’t to say that it is less serious or more forgivable, but it’s vital not to reinforce one kind of racism while fighting another.

The second lesson is that it’s vital to distinguish those occasions when anti-Semitic tropes are drawn out of unthinking ignorance and lack of contact with Jews, from those when anti-Semitic tropes are symptoms of an ingrained, ineradicable hatred of Jews. Naz Shah certainly fell into the first category, and Ilhan Omar appears to as well. In these cases, quiet contacts and education can bear fruit; shrill accusations will only make the situation worse.

The third lesson is that the fight against anti-Semitism must be led by Jews, for the sake of Jews, rather than by those who seek to leverage an apparent concern for Jews to accomplish other political goals. The Naz Shah case never became an object of national debate and Islamophobic politicians did not seek to use concerns about anti-Semitism as an Islamophobic battering ram in the same way that Trump and others have done with Omar.

Of course, there are many Jews who have engaged with Omar in this way. But the reason why it worked in the UK and not in the US is a sign of just how far advanced the development of selective anti/racism has become in America. The UK has its fundamentalist Christian Zionists and its philo-Semitic Islamophobes, but they are still not mainstream to the degree they are in the US.

American Jews who aspire to be liberal now have to face up to the fact that any public attempt to combat anti-Semitism amongst Muslim and non-white minorities will now inevitably be leveraged by the selective anti/racists of the right. The fight against anti-Semitism now has to be accompanied by a fight against the supposed philo-Semites of the Islamophobic and racist right.

In retrospect, when the Omar controversy first emerged, Jews needed to tell most of our supposed “allies” to butt out. That way, perhaps, it might have been possible for quiet back-channel diplomacy of the sort that bore fruit in the Naz Shah case to work. In future, Jews who don’t want to stoke other forms of racism may have no choice but to struggle against anti-Semitism alone, in order that future Ilhan Omars do not experience abuse that is far worse than anything they have been accused of.

Keith Kahn-Harris is a British sociologist and writer. His book Strange Hate: Antisemitism, Racism and the Limits of Diversity will be published in June 2019.