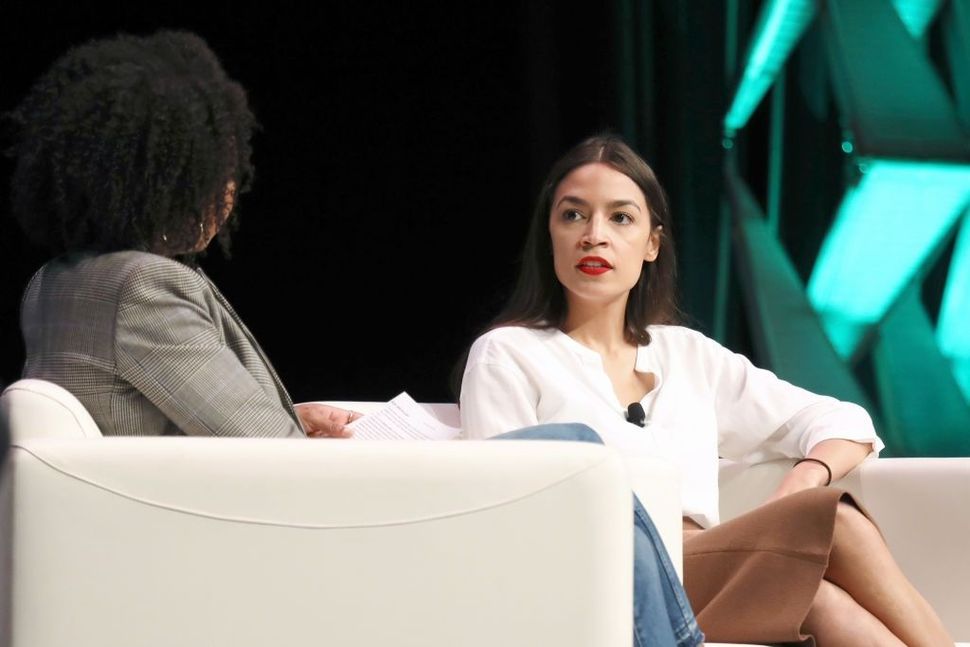 Representative Alexandria Ocasio-Cortez made waves this week when she said that cutting aid to Israel should be on the table. Explaining her position on Yahoo’s Skullduggery podcast, Ocasio-Cortez described Israeli Prime Minister Benjamin Netanyahu as a “Trump-like figure,” calling him part of the “ascent of authoritarianism across the world.”

Whether knowingly or not, Ocasio-Cortez was deploying the Democrats’ latest strategy when it comes to Israel: Peg Israel’s wrongs on Netanyahu and his increasing hostility towards the Palestinians, Israeli democratic institutions, and his political opponents.

The approach Ocasio-Cortez adopted of criticizing Israel’s leader rather than its existence or its body politic is the same nuanced approach shared by influential Democrats like Elizabeth Warren, Bernie Sanders and Beto O’Rourke, who have recently stepped up their condemnation of Netanyahu, his rhetoric, and his policies.

It’s also an approach that differs sharply from controversial Minnesota Congresswoman Ilhan Omar’s pro-BDS stance, and her frequent criticism of those who are “loyal” to Israel.

In the aftermath of the viral Omar controversy, the Democratic Party has struggled to define its stance on Israel. In a way, it’s caught between a rock and a hard place. On the one hand, being overtly critical of Israel alienates Jewish supporters and gives ground to Republicans, who were quick to label the party anti-Israel and anti-Semitic following the Omar controversy. On the other hand, Israel’s Trump-aligned extremist government, which systematically violates Palestinian human and civil rights and has abdicated a commitment to a two-state solution, is squarely out of line with the beliefs of most Democrats, and in particular, most American Jews, the vast majority of whom are Democrats who oppose Israel’s occupation.

Democratic politicians are faced with a difficult dilemma: how to show support for Israel — something essentially required of American politicians — while staying true to the party’s values.

Shifting the blame onto Netanyahu is the perfect solution.

As Ocasio-Cortez pointed out, Netanyahu’s close relationship with Trump, Jair Bolsonaro, and Vladimir Putin puts him solidly in the international authoritarian alliance.

But it doesn’t just get Democrats off the hook. There’s a subtle point in the Blame Bibi tactic, as Netanyahu is nicknamed: Blaming Netanyahu for Israel’s problems presents the message that Israel is inherently liberal and democratic but is being corrupted by the right-wing bloc. This approach to Israeli policy implies that supporting Israel is a given; Democratic Party members criticize Israel’s policies like an Israeli fed up with his own government.

This approach is likely to appease American Jews, who overwhelmingly oppose Trump and Netanyahu while supporting Israel. In other words, bashing Bibi allows Democrats to adopt the same position as American Jews.

As the rupture between the American Jewish Community and the Israeli government grows, Democratic politicians, like American Jews, are drawing a middle ground between the anti-Zionist BDS crowd and the Revisionist-Zionist Israeli right.

But it’s not entirely a home run. Scapegoating Netanyahu presents the illusion that he is single-handedly responsible for the occupation and the increased disenfranchisement of Israel’s Arab citizens. This is simply not true.

No one would deny that Netanyahu’s long tenure is largely tied to his ability to present Israel as being in constant danger and himself as the only one capable of keeping her safe. But the occupation has been in effect for over 50 years; settlements existed long before Netanyahu. Most Israelis, if they don’t condone the occupation, are apathetic.

Scapegoating Netanyahu makes it seem like the Israeli opposition, now embodied by Benny Gantz, is in line with what the Democratic Party hopes to achieve. But Gantz, Bibi’s most feared contender, was by no means an anti-occupation peacenik. Gantz frequently bragged about the number of Palestinians he killed as head of the Israeli military and vowed never to uproot most settlements.

The only Jewish party in Israel which explicitly opposes the occupation is Meretz — which only received 3% of the vote in the last election.

By directing their criticism exclusively towards Netanyahu, Democratic politicians both highlight and ignore the nuances of Israeli politics and society.

It’s true that Netanyahu is a symbol of right-wing populism, who is leading Israel further and further away from its liberal democratic foundation. But demonizing Netanyahu ignores the context in which he exists, and will only lead to harsh realizations the day he leaves office.

Martin Saps is a writer whose work has appeared in Haaretz.