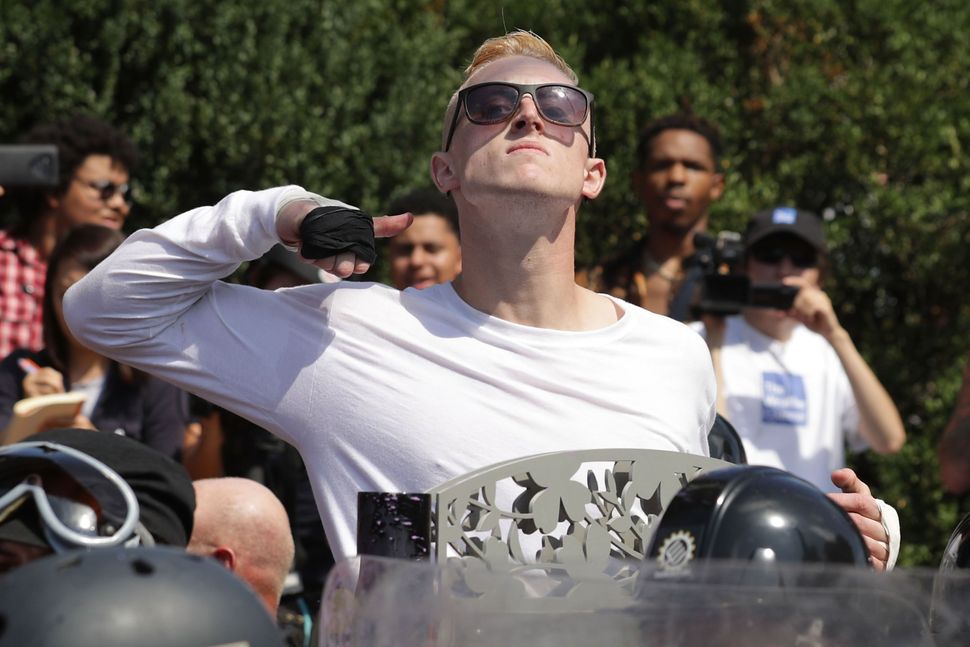 Last week, during a gathering of Democratic-leaning activists in Houston, Texas, Democratic presidential candidate Bernie Sanders was asked, “As President, what would do with the rise of white supremacist violence, to protect our communities?”

Sanders invoked his involvement with the Civil Rights Movement to prove his anti-racist bonafides, and was booed by the attendees.

Much of the political discussion after the event was critical of Sanders’s response, but the question itself bears examination.

It’s true that white supremacist violence is real, and the relevance of it is obvious after the tragedy at a Chabad synagogue outside San Diego, where an apparent white nationalist gunman killed one person and injured three others.

And certainly, in the aftermath of such events, it is both appropriate and commendable for public figures to come together and show solidarity with the impacted community and to examine public policy responses that could ensure the public’s safety from these sort of terrorist acts.

At the same time, it is worth considering how rare, in the grand scheme of things, lethal hate crimes and acts of terrorism are in the United States. According to the FBI’s 2017 hate crime statistics, there were a total of 15 victims of hate-related murders and non-negligent manslaughter that year. That’s something like 0.1% of all homicides in America.

And yet, it’s this 0.1% that gets all the attention. The rest of the homicides that occur in the U.S., even when they are clustered in communities that have been overwhelmed with spikes in violence over the last few years, have been a blip on the national news radar and the agendas of most political activists.

Last year, I wrote a long piece chronicling a surge in homicides in Baltimore. The city saw 341 homicides in 2017; New York City by comparison is fourteen times larger but had 290 murders the same year.

Despite this surging violence, there has been no comprehensive national policy response. Presidential candidates are not being asked what they plan to do about it — despite the fact that the violence in a few neighborhoods in the city alone eclipses the death toll of all terrorism in the country combined — and the national news media rarely discusses it.

So why is it we pay so much attention to some forms of violence, and not others?

Part of it has to do with how we view in-group violence versus out-group violence. The majority of routine homicide in America is between people from the same ethnic and social groups. Terrorist attacks, on the other hand, are often by a group outside of our in-group attacking us. Human beings tend to be far more suspicious of out-groups than in-groups.

So when Jussie Smollett claims to have been assaulted by white Trump supporters — an out-group to liberals — it activates a certain type of outrage and national attention that does not emerge when residents of Chicago are routinely killed in street violence.

This is not a psychological feature that is exclusive to liberals.

If a Martian had landed in the state of Virginia during 2017’s gubernatorial election and knew nothing about the region except for what he saw in campaign commercials, he would think that the average resident is living in terror of Hispanic street gangs.

The Republican candidate for governor Ed Gillespie built his campaign off of blanketing the airwaves with ads featuring MS-13, a street gang that was founded by Salvadorans on the West Coast. MS-13 is indeed a brutal organization that has used murder and beheadings as a tool of intimidation. But most of its victims are themselves Hispanic.

The average Virginian voter doesn’t have to feel like they’re in imminent danger of an extremely rare act of violence from MS-13, just as the average American from a minority background is not in imminent danger from a white nationalist terrorist. Both are real threats, but the police and intelligence agency response to them should be proportionate.

What isn’t proportionate is the lack of national attention to the enormous number of homicides — many of them related to guns — taking place in some parts of America. It is as if the deaths of victims in places like West Baltimore cannot easily be politicized, so they are virtually ignored.

This lack of attention is all the more disturbing when you think about how much focusing on and reducing violent crime can do to help the average person who lives in a high-crime area. A recent study published in the journal Demography noted that one of the leading causes of deaths for young people between the ages of 15 and 34 is homicide, and that this problem disproportionately impacts African American males.

But the study also found that the drop in homicides that occurred during the 1990’s was enormously beneficial to this group. It estimated that 17% of the reduction in the life expectancy gap between white and black men could be accounted for due to the reduction in homicides.

By taking all violence seriously, not just the rare acts of violence by extremists that pique our political sensibilities, we can do a lot to improve the well-being of people whose deaths are rarely featured in national news or political debates.

In doing so, we should be cognizant of our history. Restarting an all-out war on crime that ignores civil liberties and trades out rehabilitation for revenge would be repeating the mistakes of the past.

But by having a serious national debate about the policies that could rescue some of America’s troubled hot-spots from violence — ranging from proactive policing, to gun policy, to economic rejuvenation, to drug decriminalization — we could affirm the principle that all victims of violence matter, not just those who are victims of the particular villains we are politically focused on at the moment.