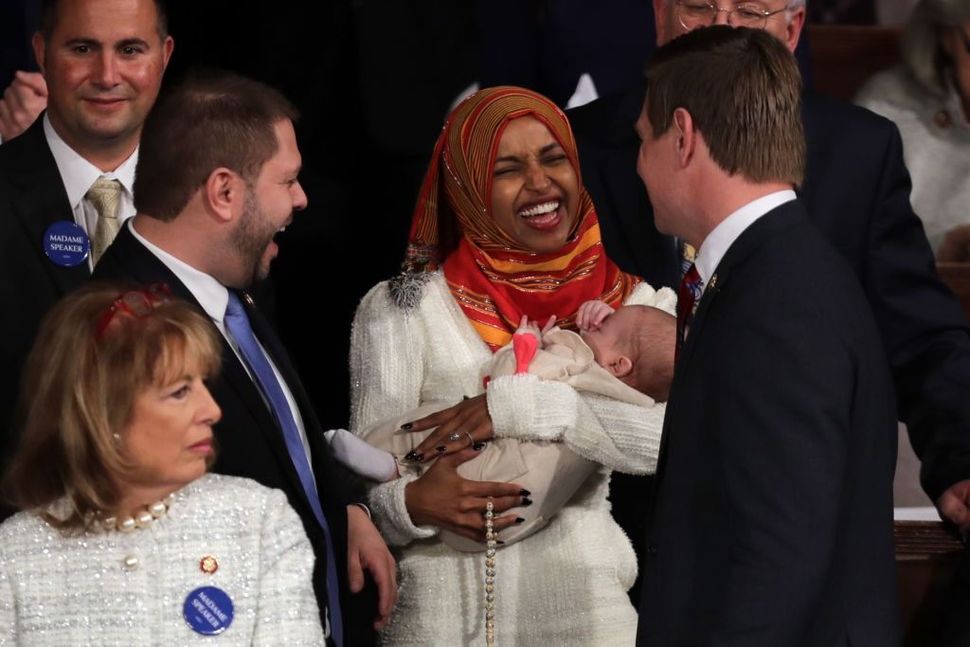 Rep. Ruben Gallego (D-NM) (L) and Rep. Eric Swalwell (D-CA) (R) speaks with Rep.-elect Ilhan Omar (D-MN) during the first session of the 116th Congress at the U.S. Capitol January 03, 2019 in Washington, DC. Under the cloud of a partial federal government shutdown, Pelosi will reclaim her former title as Speaker of the House and her fellow Democrats will take control of the House of Representatives for the second time in eight years. Image by Getty Images

In passing a resolution rejecting anti-Semitism and other forms of bigotry last week, our representatives on Capitol Hill have taken an important step towards addressing patterns of violence and bigotry that continue to fester in our society.

As anti-Semitic and anti-Muslim rhetoric increasingly poison domestic and foreign policy debates around the world, it’s critical for every one of us, and particularly our leaders in Congress, to fight back against racial, ethnic, and religious prejudice.

As an anti-racist and progressive who has dedicated my career to studying the relationship between hate, violence and preserving inclusive societies, I embrace the resolution’s repudiation of anti-Semitism and Islamophobia. But if the resolution is nothing more than a symbolic statement, it misses the bigger picture of these growing threats.

At a time when hate groups increasingly threaten the safety of Jews, Muslims, and people of color, we cannot afford to get this wrong, obscure nuance, or miss opportunities to denounce harmful tropes and stereotypes. To directly tackle hate and bigotry in our policies and rhetoric, we must avoid political theater and take these issues seriously.

Representative Ilhan Omar is particularly well-positioned to lead on this front, perhaps by calling for a national day of learning on anti-Semitism and Islamophobia that helps educate her colleagues and the broader public. After all, who better to do this than an elected official who has courageously admitted to her own stumbles?

As a representative who is black, Muslim, and a woman, Omar will always face an unfair level of scrutiny for her words and decisions. This is exactly why her leadership is so desperately needed when it comes to addressing anti-Semitism and Islamophobia: the disproportionate focus on Omar allows her to raise the bar and set a standard that the rest of Congress will be obliged to follow.

Until we decisively address these forms of bigotry and cast them out of our political discourse, I fear they will continue to fuel white nationalism and perpetuate systemic injustices.

This issue isn’t going away. Later this month, the American Israel Public Affairs Committee, better known as AIPAC, will host its 2019 Policy Conference in Washington, D.C., where Israeli Prime Minister Benjamin Netanyahu is expected to speak. That Netanyahu himself has dabbled in anti-Arab and Islamophobic tropes and at times accommodated the anti-Semitic comments of political allies should not be swept under the rug; more than ever, we must be consistent in our rejection of bigoted rhetoric.

Let’s be clear: It’s completely acceptable to critique the influence of money in politics, to debate foreign policy, and to propose new approaches to balancing civil liberties with national security. These discussions help improve policy and strengthen our democratic institutions, even (perhaps especially) when elected officials disagree with one another.

But it’s never acceptable to utilize anti-Semitic or Islamophobic tropes, intentionally or unintentionally, to argue one’s point. Accusations of dual loyalty — an all-too-common rallying cry for white nationalists and xenophobes to this day — have no place in progressive discourse and must be resolutely condemned. Not only are these tropes unhelpful in informing policy debates, but they endanger vulnerable communities by lending legitimacy to the rhetoric of anti-immigrant, white nationalist, and anti-democratic groups.

It wasn’t okay to attack Catholics as mouthpieces of the Pope in the days of widespread anti-Catholicism. It wasn’t okay when President Trump stated that Judge Gonzalo Curiel’s Mexican heritage is a conflict of interest. And it’s not okay to cast doubt on our Jewish and Muslim neighbors by rehashing long-standing anti-immigrant talking points. Not now, not ever.

Democracy is fragile and reliance on bigoted tropes makes it more so. It’s time for political leaders to put this type of rhetoric into the bins of history, where it belongs. This requires tackling the full scope of the problem instead of seeking to single out individual members of Congress.

Eric K. Ward is Executive Director of Western States Center and the author of Skin in the Game: How Antisemitism Animates White Nationalism.