No Economic Plan Can Compete With Israel’s Occupation 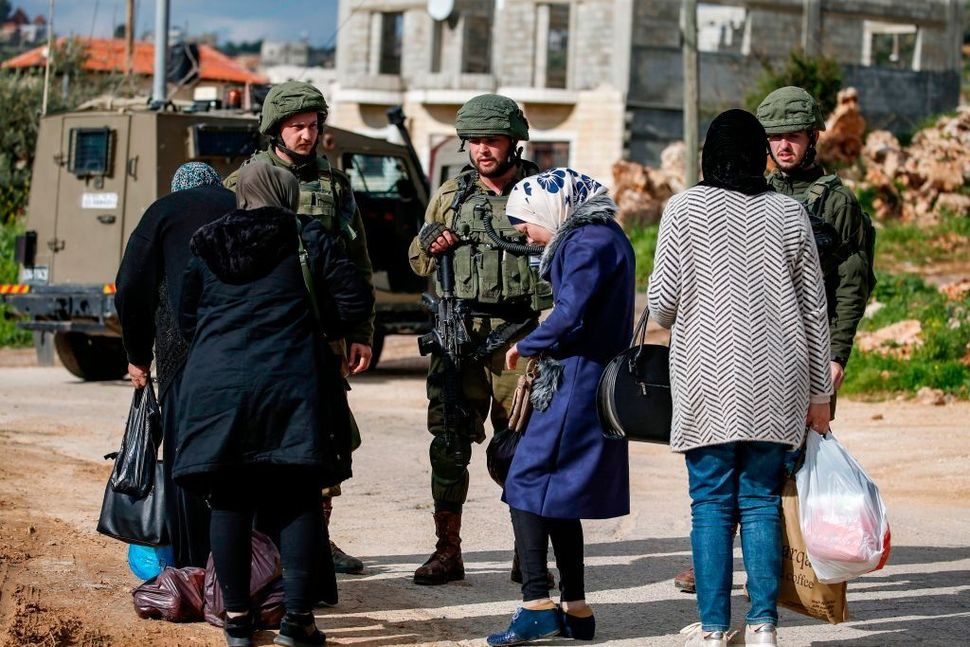 The word “occupation” does not appear in the plan, and neither does acknowledgement of the primary reason that half the workforce in Gaza is unemployed, and economic development in the West Bank is stagnant: Israeli restrictions on travel that choke commerce, deter investment and block access to jobs and educational opportunities.

For that reason, the workshop — and the plan — are doomed to fail at realizing even their limited goal of improving quality of life for the 4.7 million Palestinians living in Gaza and the West Bank.

The Trump plan calls for creating job centers, for example, to encourage women to enter the work force. But Palestinian women, especially in Gaza, have entered the workforce in record numbers in the last 12 years, in response to the Israeli-imposed closure and travel restrictions that have deepened poverty.

Why are 75% of female workers in Gaza unemployed? Because the Israeli authorities built a fence around Gaza and don’t let them get their goods to market or reach advanced degree programs outside.

The Trump administration is calling on the Palestinian government to emulate the governments of Singapore, Japan and South Korea, in part by improving infrastructure and removing “regulatory” barriers to trade. But those Asian governments transformed their economies only once they controlled their own borders and foreign relations — unlike the Palestinian governments that control only limited civilian services. No matter how well-paved the road will be, a farmer can’t use it to get her flowers to market if a soldier with a gun stops the truck.

The Trump plan encourages Palestinians to develop advanced 4G technology, but the Israeli authorities control the frequencies and only recently allowed Palestinian communications companies to use even 3G, stifling one of the few industries that might have been able to function behind walls and checkpoints.

Even if it were possible to improve the Palestinian economy without ending the occupation, it can’t be done without lifting restrictions on the movement of people and goods, as the Israeli military knows too well. For the first two decades of the occupation, the Israeli authorities pursued a policy of “enlightened occupation”: opening borders to facilitate improvement in standard of living with the goal of reducing Palestinian resistance to foreign dominance.

The Israeli authorities encouraged Palestinians to work in Israeli restaurants and construction sites, where salaries were relatively higher, and allowed a relatively free flow of goods. Although Israel restricted economic activity that could compete with Israeli farmers and manufacturers, Palestinian GDP grew significantly, in large part due to remittances. In the 1980s, a third of working Palestinians from the West Bank and nearly half of working Palestinians in Gaza had jobs in Israel.

The fantasy that Palestinians would trade their national aspirations for a higher paycheck ended with the outbreak of the First Intifada in 1987. Israel responded by choking travel, including during the Oslo peace process of the 1990s. The Israeli authorities built walls, fences and checkpoints within the West Bank and sealed off Gaza. Unsurprisingly, the Palestinian economy plummeted, and while it has recovered somewhat in the West Bank, GDP per capita in Gaza is still less than it was in 1994.

Reversing that negative economic trend requires first and foremost an end to the travel restrictions. In Gaza, for example, where 70% of the population is under 30, official unemployment is 52%. It is unrealistic to think that economic growth can take place behind fences and the patrol lines of the Israeli navy.

But Kushner and his cohorts seem to enjoy living in la-la land, and they have persuaded Arab leaders from U.S. client states to join them in their fantasy. Amazingly, the Palestinian Authority — starved of American funds and therefore with less to lose — has thus far resisted pressure to take up residence in the land of make-believe and is boycotting the workshop.

The P.A. has an unlikely ally in the form of the Israeli military, which, while rejecting Palestinian independence, has objected to some of the harsher restrictions on access that choke Palestinian economic development, viewing them as a threat to security.

If the Trump administration were truly interested in prosperity, it would send envoys not to Bahrain but rather to Jerusalem, to ask its closest ally in the Middle East to stop choking the freedom of movement needed for the Palestinian economy to function.

Sari Bashi is a Lecturer in Law, Research Scholar in Law, and the Robina Foundation Visiting Human Rights Fellow at Yale Law School. She writes and lectures on international humanitarian law and Israeli policy toward the occupied Palestinian territories, especially Gaza.

No Economic Plan Can Compete With Israel’s Occupation