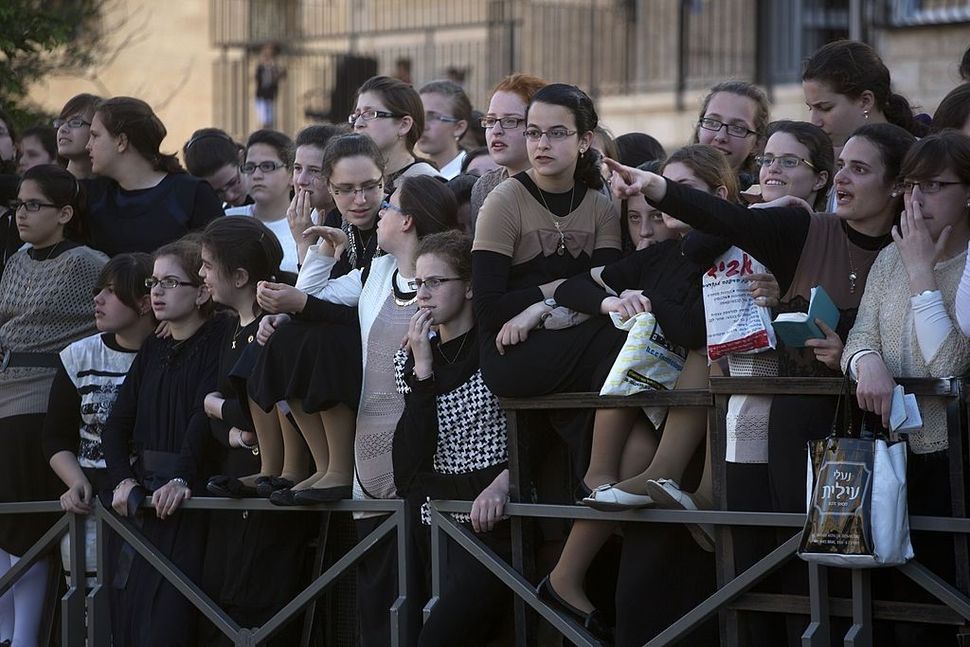 Ultra-Orthodox Jewish women of the Belz Hasidic Dynasty watch the wedding ceremony of Rabbi Shalom Rokach, the Grandson of the Belz Rabbi to Hana Batya Pener, in Jerusalem on May 21, 2013. Some 25,000 Ultra-Orthodox Jews participated in one of the biggest weddings in the past few years. AFP PHOTO/MENAHEM KAHANA (Photo credit should read MENAHEM KAHANA/AFP/Getty Images) Image by Getty Images

The latest Pew Report on religious freedom showing that Israel is practically on par with Iran on this issue should not come as much of a surprise.

Those of us who have been tracking religious freedom in Israel have observed that not only are incidents of religious intolerance and oppression on the rise, but they are becoming bolder, more normalized, and more readily supported by secular officials and leaders.

Expressions of religious intolerance are getting bolder and broader. For example, last week a fair aimed at women from the religious Zionist community — usually considered more “modern” or moderate than ultra-Orthodoxy — took place without a single picture of a woman.

Vendors were forced to offer their wares without featuring women’s faces, hands, or bodies. On Independence Day, a girl was also barred from getting on a bus because the bus driver decided her shorts were too short. In a similar incident, a young woman was not allowed to board a train in Akko because a security guard decided her outfit was too revealing.

Religious oppression is also becoming more normalized and institutionalized. Also on Israeli Independence Day, at a concert by pop singer Natan Goshen in the secular city of Ramat Gan, a girl was forced to leave the stage when an employee of the “religious culture” department got up on the stage and declared that this was a “religious” event.

Although to its credit, the Ramat Gan municipality is reviewing the incident, the concert continued as if nothing happened, pointing to normalization of religious control. Even Facebook in Israel is conducting gender-segregated trainings for religious audiences – which is also a sign that bringing ultra-Orthodox men and women into the workforce does not necessarily lead to less radicalization.

What’s more, last week a new rabbinical court was established in Jerusalem particularly for the purpose of enforcing “modesty” in the northern neighborhoods.

Perhaps the most frightening aspect of the rise of religious intolerance is the governmental support for it. This, too, is not a new aspect of the issue.

When the secular Nir Barkat was mayor of Jerusalem, for example, he often caved into the demands of radical religious factions, such as when he condoned the erasure of women from billboard ads in the city or produced marketing materials for events like the Jerusalem marathon with no women.

However, what we are seeing in the current government is far worse that what preceded it. Newly appointed education minister Rafi Peretz, leader of the Jewish Home party, has expressed inciting opinions, such as his support of gay “conversion” therapy, his claim that intermarriage is akin to the Holocaust, and his belief that non-Jews are lesser citizens than Jews.

His colleague, Bezalel Smotrich — who was short-listed for Justice Minister and will likely be a minister in the next election if his party is in the coalition — is even scarier. He openly declared that as Justice Minister, his goal would be to create a state based on Jewish law.

That is about as religiously intolerant as Israel could become. To be fair, Netanyahu declined to give him the post, but under tight coalition negotiations, everything is likely to be on the table.

Moreover, the government has been known to support religious extremist practices from the taxpayers’ coffers, even when it has no benefit.

The controversial 1.7 billion NIS educational pilot of segregated colleges for Haredi men, for example, has been a complete failure, with reports showing 76% of the men dropping out – yet the program continues.

It is important to note that as religious radicalism rises in Israel and around the world, women are the first targets. This has been the case, for instance, in Iran, in Afghanistan, in the United States, and in Israel, where religious politicians take aim at women’s bodies, women’s movement, and women’s basic freedoms.

Significantly, despite these trends of radical religious control over everyday life in Israel, the majority of the Israeli public wants religious pluralism, and separation of religion and state.

According to a recent poll by Hiddush, an organization that promotes religious freedom, separation of religion and state is supported by 66% of Jewish Israelis, more than the 55% that supported it in 2010. In addition, support for recognition of progressive Jewish marriage rose from 53% in 2019 to 70% in 2018.

All of this matters. The religious freedoms of non-Orthodox Jews and non-Jews are at stake. The everyday lives of women across all sectors are threatened. And Israel’s very character as a democracy is at risk.

As Israel approaches yet another national election, proponents of religious freedom, gender equality, and separation of religion and state, must be vigilant in letting their voices be heard to stop the continued spread of these disturbing, harmful, and dangerous trends.

Dr. Elana Sztokman is the author of The War on Women in Israel: A Story of Religious Radicalism and the Women Fighting for Freedom.