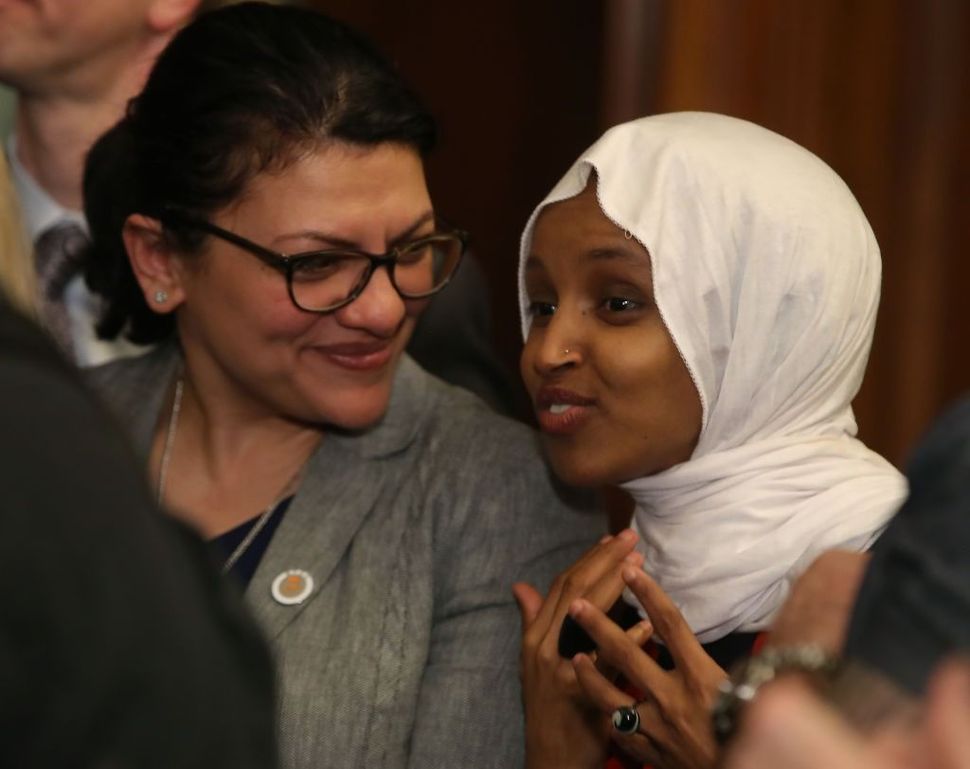 In the aftermath of the flap created by Israeli Prime Minister Benjamin Netanyahu’s decision to deny Rashida Tlaib (MI-D) and Ilhan Omar (MN-D) the right to visit occupied Palestinian lands, the Congresswomen held a press conference refocusing our attention on Israel’s occupation and the denial of Palestinian human rights.

“All I can do … is to elevate the truth the only way I know how.”

Rep. @RashidaTlaib spoke at a press conference after she and Rep. Ilhan Omar were banned from visiting Israel. pic.twitter.com/hTakcPgJ10

This was a critical move because the chorus of liberal lamentations over the flap has almost entirely missed the mark.

Some Democrats have blamed US President Donald Trump saying that it was his tweet to Netanyahu that caused the Israeli Prime Minister to reverse himself and deny entry. Others expressed “deep disappointment” with the Netanyahu decision, worrying about the impact it would have on the growing partisan divide over attitudes toward Israel. Still others put these two concerns together, insisting that it is the Trump-Netanyahu partnership that is solely responsible for the breakdown of bipartisan support for Israel.

These views are ahistorical, naïve, and insulting to the intelligence of the many American political constituencies whose views toward the Israeli-Palestinian conflict have changed during the past several decades. They also, quite amazingly, ignore the role played by the growing public awareness of the sheer brutality of the Israeli occupation and the resultant reality of Palestinian suffering.

To be clear, while support for Israel, in the abstract, has always been strong, there has long been a partisan divide on attitudes toward Israeli policies. This was evident during the first intifada, when many Democratic voters recoiled at Israel’s brutal response to stone-throwing Palestinian youth.

At the 1988 Democratic Convention, as polls showed growing Democratic sympathy for Palestinians, I led the Jackson delegation’s push for a pro-Palestinian peace plank in the party platform with the support of more than 1200 delegates. Facing tremendous pressure from the party establishment, we called for “no vote” on our plank. But we still maintained our right to have a floor demonstration and speeches from the podium in favor of our position. It was the first time such views were heard at a convention.

During the 1990’s, the divide was reinforced as the Republican party fell hostage to the religious right and neo-Conservatives who combined to oppose President Clinton’s push for an Israeli-Palestinian peace. Back then, it was Speaker Newt Gingrich’s embrace of Israel’s Likud Party that resulted in legislation that impeded the Oslo peace process, culminating in Gingrich’s invitation to Netanyahu to deliver his first address to a Joint Session of Congress. The Israeli leader used that speech to make clear his intention to literally bury the “Oslo Accords.”

In the midst of the Second Intifada, after rejecting the efforts of his own peace envoys, President George W. Bush embraced Prime Minister Ariel Sharon calling him a “man of peace.” While pursuing his deeply divisive war in Iraq, Bush largely neglected Israeli-Palestinian peacemaking until his second term — at which point, his neglect and recklessness had created conditions that made a solution more difficult to achieve.

The Israeli right and its settlement agenda had been emboldened. Meanwhile, Palestinian politics had fallen in disarray: the Palestinian Authority became irreparably weakened and a virtual dependency on international aid, while Hamas, with its penchant for reckless violence, gained complete control over Gaza.

Once again, polls were showing a deep partisan divide, with Republicans in lock step with their President and more liberal Democrats distancing themselves, not from the idea of “Israel”, but from Israeli policies toward the Palestinians.

This divide only grew with the election of President Barack Obama and the return to power in Israel of Benjamin Netanyahu. The Israeli’s effort to stymie Obama’s peacemaking diplomacy served to exacerbate the split. When Republicans once again invited Netanyahu to address a Joint Session, this time to oppose the Iran nuclear deal, the Democratic/Republican rupture was on full display, with 58 Democrats taking the unprecedented step of boycotting the speech.

When Bernie Sanders ran for president in 2016, he gave voice to the growing disenchantment of Democratic voters with the party establishment’s support for Israel. For the first time since Jackson in 1988, we had a full-throated debate on Israel’s occupation policies.

The point is that the gap between how Republicans and Democrats have understood this issue isn’t new with Trump and Netanyahu. It’s been growing for decades.

Two observations are in order: In the first place, what appears in polling as a partisan split on views toward Israeli policies and Palestinian rights masks the reality that it is, in fact, a demographic divide. Attitudes among Republicans are largely shaped by the large portion of their voters who identify as white Evangelicals and born-again Christians and also by those who hold strong anti-Arab, anti-Muslim views. Attitudes of Democratic voters’ views are shaped by Millennials, Blacks, Latinos, and Asians, and voters without any religious affiliation — all of whom are more favorable of Arabs and Muslims and more supportive of Palestinians.

Trump and Netanyahu are not creating the divide so much as reflecting it, and to an extent exacerbating it. Trump is simply a cruder version of Gingrich and Bush. And Netanyahu reflects mainstream Israeli attitudes toward the occupation.

In the upcoming Israeli election, there is no possible winner who promises any different approach toward the Palestinians. And in the US, the divide among voters has always been there, but the Democratic Party’s elected leadership has been able to ignore it and paper over it with resolutions of bipartisan support for Israel. What the courageous leadership of Tlaib, a Palestinian American, and Omar, a Somali-Yemeni American immigrant, have done is to make such a facade of unanimity impossible to maintain.

Just last week, 41 Democrats and 31 Republicans traveled to Israel on an AIPAC trip to demonstrate their support. It was interesting to note that most of the Democrats didn’t tweet about their visit. They knew their voters wouldn’t be interested in or supportive of their pilgrimage. The visit was greeted by the media as a largely ho-hum business-as-usual affair.

They were going to hear the stories of real people and how their lives have been affected by an oppressive and humiliating occupation. And the press would be with them every step of the way.

At first, Netanyahu begrudgingly agreed to the visit, but then turned to Trump to give him a way out. When Trump obliged, the Israeli prime minister backtracked hoping it would put an end to the potential embarrassment.

Instead, the whole episode has exposed the real Israel known all too well by the Palestinian citizens of the state, the Palestinians living under occupation, and the countless Arab Americans who have faced discrimination, detention or denial of entry for decades when attempting to visit the Occupied Territories.

Instead of just expressing disappointment, worrying about the potential impact on bipartisan support for Israel or blaming Trump, liberals need to recognize a few realities. The partisan divide has been with us for decades and its causes are Israeli policies that have imposed unbearable hardships on Palestinians making peace more difficult to achieve.

The Israeli occupation has been enabled by both Republican encouragement and the cowardice of the Democratic establishment to challenge it. What’s new is that the voices of the Democratic voters, long disenchanted by their leadership’s acquiescence, now have champions in Congress who are bringing this divide into the open.

And Congresswomen Tlaib and Omar exposed all this without even setting foot in Israel or Palestine.

I, for one cannot wait for them to conduct their official visit.

James J. Zogby is co-founder and president of the Arab American Institute.