I Come From A Jewish Military Family. Mr. Trump: Are We Disloyal, Too? 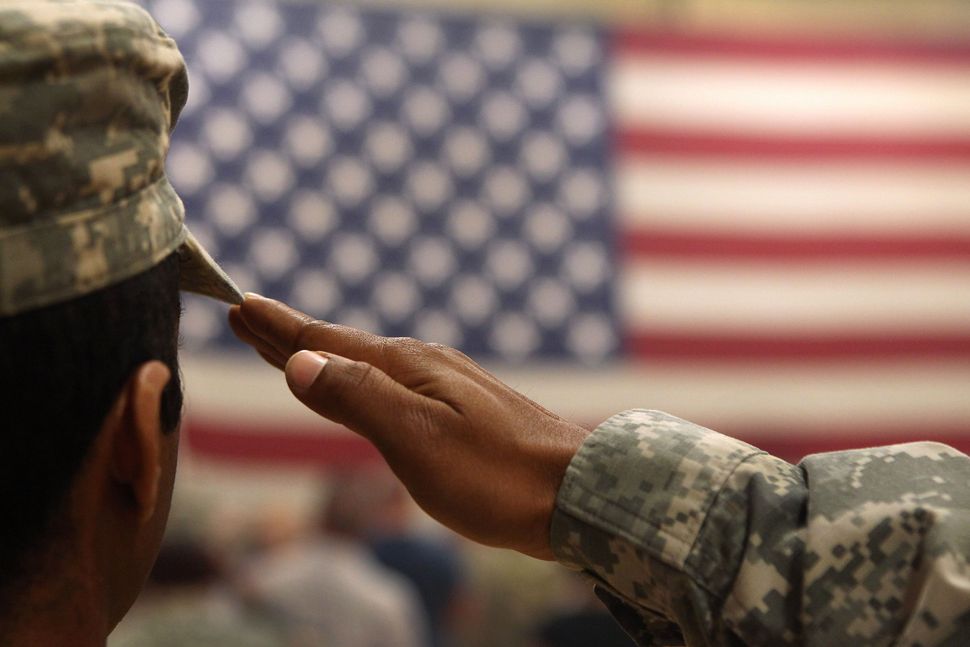 This June, my family made the long journey to Colleville-sur-Mer in France to attend the ceremony for the 75th Anniversary of D-Day. On the way to the ceremony, we passed through Norman villages adorned with American, Canadian and French flags, an homage to the brave soldiers who liberated them from Nazi tyranny. On the stage sat a few dozen World War II veterans. Many were in wheelchairs, or bent over by age, but as the National Anthem played, they turned steely eyed, strong, and they showed the mettle and resolve that brought to them to where they stood that day.

I glanced at my father sitting next to me, his eyes soft with tears, clutching an image of his father, his father-in-law and his son, my brother, all in their American military uniforms.

We are Jewish, and like many Jewish families, we have not been in the United States for countless generations. But a commitment to serving this country, either militarily or socially, is an important part of how we were raised. Both of my grandfathers served in World War II in the American Army; one was a 1st generation American, while the other wasn’t even a citizen. He escaped Europe, joined the American Army shortly thereafter, and went straight back to Europe to fight.

My brother follows in that proud tradition. He is an American soldier currently on his second deployment. My parents installed a flagpole in their yard to fly their American flag high and proud. On Memorial Day, attending the parade to honor fallen soldiers happens before the family BBQ, a small small gesture of appreciation for the selfless service the military shows day in and day out.

We are constantly worried for my brother’s safety, and the safety of his unit. Calls from him that end abruptly after hearing a siren in the background set our teeth on edge until we receive another either hours later, or sometimes a day, saying “I’m okay.”

We are proud Americans and we are proud liberal Jews. Those two identities have never been pitted against one another, until this past week, when the President and two elected Congresswomen called our identities, and values, into question.

When my brother joined the military, he was not asked his political affiliation or who he voted for. He was asked if he was prepared to embody the Army’s values: Loyalty to country, Duty, Respect, Selfless Service, Honor, Integrity and Personal Courage.

The military fights honorably, irrespective of the administration in power; administrations and presidents come and go, and though their legacies may continue, they are but temporary stewards of this country. But flag and country are everlasting and that is why we pledge our allegiance to them.

So, there is nothing altruistic, honorable or genuine in Trump’s so called “defense” of the Jews and Israel. His expectation of something in return from the Jewish community is frightening. Will he impose consequences if we do not reciprocate? He has proven to be vindictive enough, even to our allies.

What he fails to comprehend is that though his morals and values blow in a different direction every time the wind rolls in, ours are unwavering. Our “lack of knowledge” comes not from blind loyalty but our ability to hold two truths at once: that the left and right can both, at the same time, peddle anti-Semitism.

While those in power continue to yell and tweet and use the Jewish community as an unwilling pawn in their political chess match, my brother remains deployed, standing tall, wearing his uniform proudly.

His loyalty is unwavering. It is true north. It is tattooed on his body and etched into his soul.

When he was done with his military service, he voluntarily re-upped and redeployed, so he could make sure he always has his fellow soldiers’ “six”. His loyalty leads him to run towards bullets and towards danger, so that I can sit here writing this from the comfort of my home.

He lives the Army Values every day.

There should be no litmus test of loyalty from the individual who admitted his willingness to allow a foreign government to interfere in our elections, or from any elected officials who don’t have the spine to stand up to all of those peddling in anti-Semitism.

How my brother votes is irrelevant. Whether Democrat or Republican, his dedication and loyalty to his country is sacrosanct, it is not up for debate. He is not a “good Jew” or a “bad Jew”. He is a great American soldier. Period.

The author comes from a Jewish military family. Because her brother is active duty, we have refrained from identifying her by name to protect him.

I Come From A Jewish Military Family. Mr. Trump: Are We Disloyal, Too?