This Week Proves It: Politicians Won’t Call Out Anti-Semitism On Their Own Side 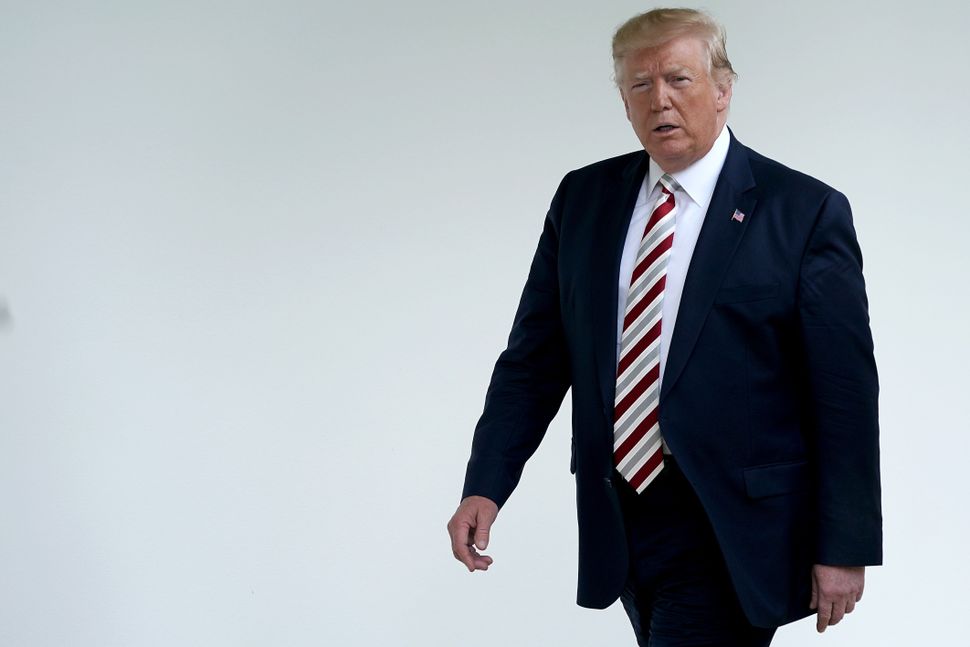 President Trump, long a trafficker in anti-Semitic stereotypes, treated American Jews to a classic anti-Semitic canard Tuesday afternoon. When asked about two Congresswomen, Rashida Tlaib and Ilhan Omar, who had been barred from Israel at Trump’s own behest, he broke out an oldie but a goodie from the closet of anti-Semitic tropes.

“Any Jewish people that vote for a Democrat, I think it shows either a total lack of knowledge or great disloyalty,” President Trump told reporters.

Per Trump, Jews are and should be loyal to Israel rather the United States; to show their loyalty, they should vote for a Republican.

The dual loyalties trope is a classic of anti-Semitic literature. The idea that Jews are more loyal to each other or to Israel than to the countries where they live has long been used as an excuse to vilify our communities and to whip up pogroms against us. It’s been used to justify our torture, murder, and even genocide.

That the President of the United States would suggest that we vote for his party or be called traitors is an absolutely horrifying state of affairs, reminiscent of the worst periods of Jewish history.

And it wasn’t even the first time the President has instrumentalized Jews and Israel to attack the Congresswomen. He has made attacking “The Squad” — a group of four Democratic congresswomen of color that includes Omar, Tlaib, Alexandria Ocasio-Cortez and Ayanna Pressley — a centerpiece of his 2020 reelection campaign. His attacks have been relentless, and often racist. And he hasn’t hesitated to drag the Jews and Israel into the scrum, using both as one more weapon in his racist rants. “When will the Radical Left Congresswomen apologize to our Country, the people of Israel and even to the Office of the President, for the foul language they have used,” he tweeted shortly after his infamous tweetstorm telling the U.S. Congresswomen to “go back” to the countries they came from.

And, because instrumentalization is a form of dehumanization, it was inevitable that he would turn us from battering ram into target.

Who in the Republican Party – so quick to call out Democrats for their failures – will call him out for this? Who will stand up to him and tell him he’s gone too far? Who will buck the trend of cravenness and stand up for American Jews’ right to live in safety and security without having anti-Semitic insults hurled our way by the leader of the free world, our very own president? Someone close to the President clearly knows the comment was problematic: It was edited out of the White House’s version of the press conference, as Forward reporter Aiden Pink noted.

Notably, the White House video of Trump’s remarks doesn’t include the quote claiming Jewish Democrats show “either a total lack of knowledge or great disloyalty.” https://t.co/crRoME6SVi

But that hasn’t stopped the apologetics from rolling in, led by a cringing tweet from the Republican Jewish Coalition.

Of course, the Democrats are already lining up to condemn the President’s words. But they have been all too reticent to tackle the same problem in their own ranks.

The truth is, it’s been a tough week for American Jews. On Thursday, the Israeli press reported that Israel would not allow Omar and Tlaib entry for the trip they had planned to the occupied West Bank. It was astounding news, given that Ambassador Ron Dermer had assured House Democrats that out of respect, the two would be allowed to visit, despite their support for the boycott of Israel, which Israel often uses as a pretext to bar dissenters.

What changed? Trump. He again used the Jews as a battering ram against his favorite target. Last week, he admitted that he had reached out to Israeli officials to demand they bar the congresswomen.

In what amounted to a huge affront to the United States Congress and the American Jews they represent, Netanyahu conceded to Trump’s demand, announced by tweet; Israel would no longer allow them to visit.

The decision was a huge betrayal of the global Jewish community, of Israeli democracy, of the sacred sovereignty of Israel’s and America’s respective elections, and of the U.S.-Israel relationship, sacred to most Jews. In both countries, Jews from across the political spectrum decried the decision. Even those who typically refrain from criticizing Israel took part, distancing themselves from the decision and lamenting how deeply it would impact the bond between America and Israel for decades to come.

And then it was revealed that the Palestinian organization that arranged the congresswomen’s trip had published anti-Semitic articles. One of them claimed that Jews baked blood into their matzah. Another, lifted from a neo-Nazi website, argued that Jews controlled the media. Both pieces were deleted, one with an apology. But the website remains littered with articles praising terrorists.

Not a single Democrat condemned the revelation.

Worse still, both Omar and Tlaib shared a cartoon over the weekend in their Instagram stories by cartoonist Carlos Latuff, who placed second in Iran’s “International Holocaust Cartoon Contest” and has long been labeled anti-Semitic for his cartoons comparing Israelis with Nazis.

The cartoon casts Trump as an instrument of Netanyahu, forming the second half of an Israeli flag. In its reversal of the power dynamics actually at play — Netanyahu was doing Trump’s bidding, not the other way around — the comic plays on the anti-Semitic trope of Jewish world domination. It also casts the congresswomen as being silenced by the Jewish state, another classic trope that bears no relation to truth in this scenario; far from being silenced, they have been more vocal than ever since they were barred from visiting the West Bank.

And yet, despite the ugly grammar at play, not one Democrat called out the fact that two of their own shared the comic. On the contrary: The most notable statement from a Democratic member of Congress about anti-Semitism this week was when Rep. Ted Lieu had to apologize for accusing Trump’s ambassador to Israel of — you guessed it — dual loyalty.

It’s silly to compare levels of bigotry, especially when Trump’s words have indirectly led to actual murder. But it’s getting to the point where separating out left wing anti-Semitism from right wing anti-Semitism feels moot, as Izabella Tabarovsky pointed out this week.

Worst of all, American Jews can no longer ignore the fact that neither of the parties is willing to stand up for us against their own party members. We have been turned into a tool to be used to bash the other side.

This Week Proves It: Politicians Won’t Call Out Anti-Semitism On Their Own Side