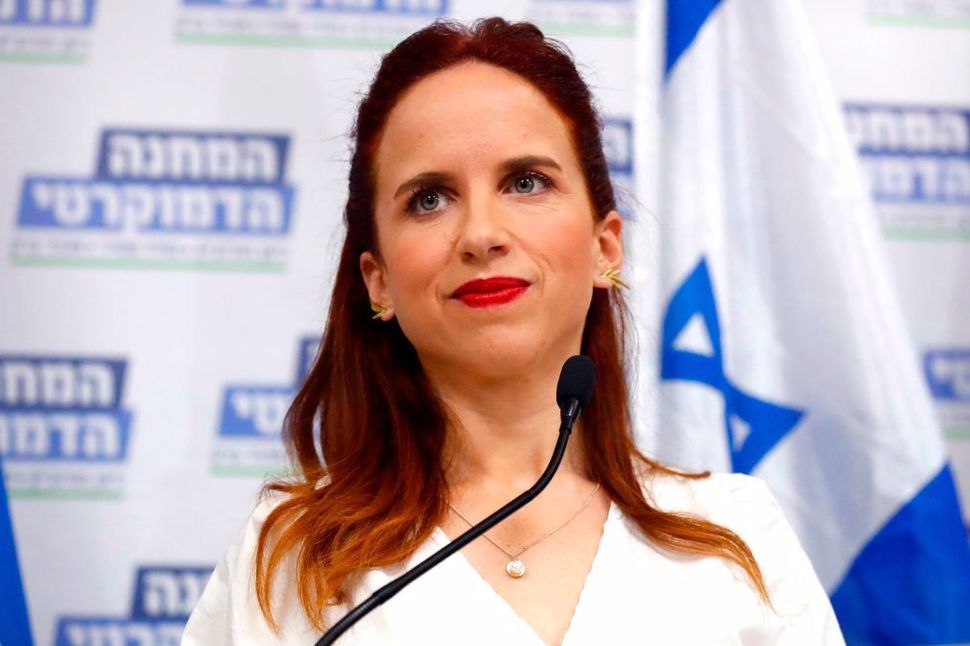 In recent attack ads against the nonviolent, Palestinian-led Boycott, Divestment and Sanctions movement, politician Stav Shaffir alleged that the group and its work were just like Benjamin Netanyahu and Donald Trump. In an article and online video, she claimed the BDS movement represents “anti-progressive” politics “based on fear and isolation.”

As a member of the Democratic Union who says she opposes Netanyahu, the Right and their political agenda, Shaffir has painted herself as having the courage to stand up against authoritarianism.

Unfortunately, an Israeli politician attacking a nonviolent Palestinian protest movement is not a display of courage. It is a surrender to, and an ingratiation with the agenda of the political rivals she claims to oppose.

Instead of creating real opposition to the authoritarian regimes that are evolving in Israel and the U.S., Shaffir is actually reinforcing two key features of these regimes: silencing criticism by delegitimizing civil struggles, and weakening democratic values like freedom of expression and freedom of protest.

I wish I were surprised. But this is not the first time Israeli politicians who claim to champion democracy actually abandon its core tenets. Instead of setting a clear ethical position and pushing the public discourse towards it, they sacrifice these principles to gain popularity. Instead of standing with all those targeted by authoritarian leaders, they throw them under the bus.

Not too long ago, I was under that bus. In 2016, I was the director of Breaking the Silence, an Israeli organization calling to end the occupation. That year, the Israeli government launched an aggressive campaign against us. Not unlike similar dynamics around the world, the public was bombarded with lies and disinformation with the aim of silencing our criticism of the government.

While Netanyahu and his senior ministers spewed hateful vitriol, accusing us of defaming Israel on every public platform, Shaffir, who was then an MK for the Labor Party, kept her mouth shut.

While my staff and I had to be escorted by special security to ensure our safety in the face of this incitement, Shaffir kept her mouth shut. As the Israeli democratic space shrunk, and the chilling effect of the government campaign spread around us, Shaffir and many other “pro-democracy” Knesset members preferred to stand aside so that the flames of incitement would not, God forbid, be directed at them too.

The Netanyahu government’s attack on the BDS movement that Shaffir has lent her voice to is also part of this regime’s trend of silencing and diminishing any criticism that challenges them or their agenda.

In 2015, Netanyahu established a new government office called the “Ministry of Strategic Affairs.” The office invests its huge budget in public campaigns against BDS. These campaigns, too, are based on incitement and lies in their attempts to mark the BDS movement as terrorist activity.

In 2017, a law was passed in the Knesset that denies entry into Israel to anyone who calls for a boycott of Israel. And since Israel controls entry into the Palestinian territories, it effectively bars entry to those areas as well. Netanyahu’s recent decision to deny entry to Palestine to U.S. congresswomen Rashida Tlaib and Ilhan Omar must be understood in this context.

Leadership that wants to create a real alternative to these democracy-crushing acts should bravely resist this well funded, deep-pocketed, public brainwashing effort. A coherent progressive position cannot call a non-violent movement led by an oppressed group a political rival.

This is true around the world, and must also be true in Israel.

Instead of aligning themselves with Netanyahu and Trump’s messages, progressive democratic leaders should insist that basic rights like freedom of expression, freedom of movement, and freedom to protest are not perks that a government can choose if, when and to whom to extend them. They are the essence of democracy.

Political leaders don’t have to agree with the agenda or tactics of the BDS movement. But lending their voices and platforms to jumping onboard with the right-wing campaign against the Palestinians and their struggle is both immoral and a gift to Trump and Netanyahu. And once again, it is the true oppressed group that foots the bill: the Palestinians.

Real progressive political leaders should say without fear that the non-violent Palestinian resistance is legitimate and the call for a boycott is a democratic act of protest for a people under oppression. Our leaders must use their political and public power to put an end to the violation of the Palestinians’ human rights instead of attacking those who are struggling for these rights. That would be courage.

Yuli Novak is the former executive director of Breaking the Silence.