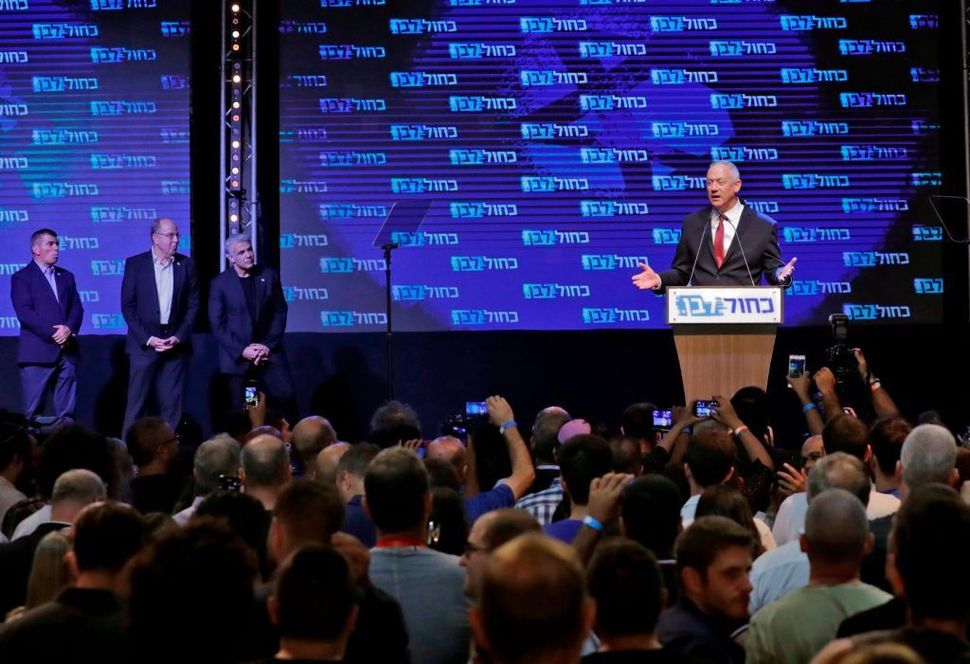 Beyond interminable coalition bargaining, one of the more interesting developments around Israel’s April and September elections was a renewed attention to the word “liberal.” During these two cycles, it suddenly became fashionable for parties and political figures to present themselves as liberal — and not just on the left.

Hawkish, right wing spoiler Avigdor Lieberman woke up on Wednesday morning last week and said, “The only viable option is to establish a national unity government, a wide liberal government,” by which he meant the two largest parties, Blue and White (33 seats) and Likud (31), and his eight-seat party Yisrael Beyteinu.

Apparently, Benny Gantz, leader of Blue and White, had the same dream. He told his party list that he would establish “a wide, liberal unity government that will express the will of the people.”

Even right wing leaders Ayelet Shaked and Naftali Bennett broke from the national-religious party Jewish Home to form the New Right in April, which they positioned as liberal right-wing. They didn’t cross the threshold, but they brought this same energy — right-wing religious politics tempered by a liberal right-wing element — to their current new party, Yemina.

It’s counterintuitive to say the least. The Israel of the past decade is not known for political outbidding over liberal values. Throughout my 20 years of polling Israelis, the ideologies of left, right and center have been defined predominantly by attitudes towards security. These issues overshadowed all other dividing lines. Time and again, center or left parties tried to change the electoral map by proving their security mettle, efforts that ended in failure at best, or embarrassment; they were fighting a battle that the other side owned.

The shift to jockeying for who is more liberal, especially on the right, suggests the start of a deeper shift in Israeli political culture, the emergence of a new political currency that positions the center-left as home turf.

Of course, much rides on how you define the word. Liberal, or liberalism, are complex concepts under normal circumstances. In Israel, naturally, they must be even more complex. There are three axes of the liberal-conservative spectrum in Israel, says Rafi Barzilay, a longtime political strategist turned PhD candidate who has worked for both left and right-wing parties: Security, the economy, and religion and state. Israeli parties, Barzilay observed, tend to take positions on one of these axes but not the other.

Take Lieberman: He says little about his economic worldview, and his approach to the Israeli-Palestinian conflict is decidedly illiberal, involving stripping Arab Israelis of their citizenship, harsh military measures, and outright harassment of Israel’s Arab minority. When he promises a liberal government, he refers primarily to separation of religion and state, and ideally a government without the ultra-Orthodox parties.

Gantz, too, probably uses “liberal” to refer to a coalition without Haredim — and little else. His ideas about the economy are inscrutable, with promises of consensus issues like lower cost of living or improving productivity. And if Blue and White is dovish on the Israeli- Palestinian conflict, it doesn’t show. The party boasted that Netanyahu’s annexationist promises were similar to their own. Gantz’s ad campaign from the April election began with a ticker count of Palestinians killed in Gaza under his command.

For their part, the New Right had trouble making a serious claim of being liberal on religion and state; Bennett emerged on the political stage from the bosom of the national-religious community, and prior to entering politics, he led the Yesha Council representing West Bank settlers. Needless to say, Bennett, Shaked and all their political partners are hardline on the conflict; they support annexation and campaigned on steadfast opposition to Palestinian statehood. And on the economy, Shaked has staked out a liberal economic platform that requires the prefix “neo.” In a lengthy 2017 essay, Shaked concluded that the free-market capitalist tradition among Jews is a “2000 year old” proven method for economic success, consciously evoking the trope of a 2000-year old collective Jewish identity.

So why were these decidedly illiberal people claiming the mantel of liberalism? The right-wing competition over the liberal label had a clear political goal: Both Lieberman and Shaked coveted Likud votes. They knew the Likud core was strong, but identified secular, security-hawk, capitalist-oriented right-wing Israelis as a vulnerable target.

And yet, they had only limited success based on liberal free market economics or separation of religion and state; no one doubts Netanyahu’s neo-liberal economic orientation, and Lieberman only gained three percentage points in total, only a portion of them from Likud.

The real reason liberals left Likud was not because they bought into Shaked or Lieberman’s new brands, but because of another liberal-conservative axis altogether: democratic governance and rule of law, and fear that Netanyahu will sacrifice them to get away with corruption.

That this would be his undoing Netanyahu could have foreseen if he looked at the history of his party. Like so many Israeli parties, Likud was originally an amalgam of several parties that merged in the mid-1970s. The founding generation were Jabotinskyites in the tradition of Menachem Begin: economically liberal, hardline on Jewish national issues, merciless towards Arabs, and yet also deeply committed to the rule of law.

And it’s on this last front that Netanyahu lost the heirs of Likud’s earlier generation. Michael Eitan, a Likud legislator for 30 years, now retired, announced he would not vote Likud for the first time in his life just ahead of last week’s vote. Dan Tichon, a former Speaker of the Knesset, made a similar statement. Begin’s own son, Benny, did the same. And another famous figure associated with the liberal wing of the Likud, Reuven Rivlin, has long been at odds with the Prime Minister.

The final straw for Begin, Tichon and Eitan was Netanyahu’s reckless attempt to pass a law that would injure the election process, for political expedience. But the long buildup of an assault on the judiciary, expectations that Netanyahu would seek an immunity law or a judicial override clause, set the stage.

As Eitan wrote on his Facebook page, “What’s a person to do who believes in the principle of separation of powers, and the supremacy of the rule of law? The Prime Minister’s attacks are not only an attempt to damage the judicial branch but total takeover of the Knesset.”

Or, as Eitan Bartal, an adviser to former Likud campaigns and head of the Visual Communications Department at Holon Institute of Technology, put it, “It’s illiberal to have a Prime Minister in power for so long. Liberalism supports change and initiative; this is like rent control.”

For liberals who believe in the rule of law and an independent judiciary, Shaked is just not the solution; she has led the charge against the Supreme Court and the whole judicial branch.

There’s an irony to this new premium placed on very specific kinds of liberalism among hawkish types, something Stav Shaffir, the popular Labor legislator who defected to lead the Democratic Union together with Meretz and Ehud Barak in September, sees as the right hijacking liberal ideas, but sapping them of meaning. “There’s nothing liberal about Yemina,” she said by phone, accusing them of giving billions to the settlements, partnering with rabbis who support IDF evasion and enforced modest dress for girls. “They use the word [liberal] to hide an agenda that is very far from where most Israelis stand,” she said.

In her view, the Democratic Union brought back broader liberal values regarding the conflict, religious freedom and equality in general. The party called itself left-wing “without being ashamed or afraid. That hasn’t happened many years.”

If the future axis revolves around the rule of law, civic values and human and individual rights, parties such as Meretz and Labor ought to have a natural advantage. But in truth, none of the right-liberal contradictions will drive right-wing Israelis en masse to parties that are left wing on the Israeli-Palestinian conflict. For them, the issue remains a psychological brick wall.

More likely, the dissonance will eventually push the right-wing parties vying to be “liberal” to expand liberalism beyond a single topic, to soften the contradictions. That process will take time. During that same time, Israel’s hold over Palestinians in the territories will deepen.

Perhaps the comprehensive view of liberal values, individual rights and equality of all people will finally sink in, just as Israel realizes that its citizen body has changed forever.

Dahlia Scheindlin is a public opinion expert and political analyst. She is a policy fellow with the Mitvim Institute and The Century Foundation, and a regular writer for +972 Magazine. She conducted polling and advising for Meretz/Democratic Union at an early stage of the current campaign.