Stop Celebrating. Netanyahu Is A Symptom Of Israel’s Problem, Not Its Cause 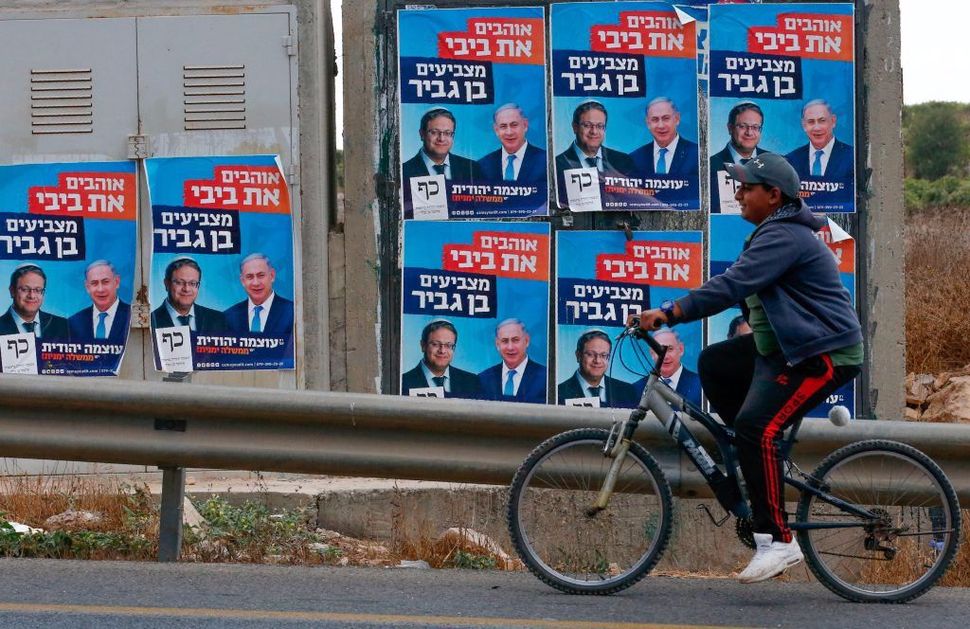 Cyclist rides past campaign posters in the West Bank. Image by Getty Images

When the polls closed after Tuesday’s election in Israel, and the 24-hour long Israeli closure of the occupied Palestinian enclaves came to an end, it was unclear who had won and who had lost. But now, it’s clear that the longest-serving prime minister in the country’s history, Benjamin Netanyahu, failed to secure a right-wing majority in the Knesset to renew his term.

Once the results are officially confirmed, Netanyahu’s defeat will be widely celebrated amongst opponents of corruption, populism and divisiveness; in two weeks, Netanyahu will face pre-indictment hearings on several counts of corruption.

Others might celebrate on behalf of the Palestinians, who Netanyahu has made a habit of inciting against. But they would be wrong to do so.

While the impact of Netanyahu’s ouster and possible indictment remain to be seen, Palestinians can expect no positive change to their situation. We will remain the losers of Israel’s elections, for no matter who gets to form the next Israeli government, there is no sign of any change when it comes to Israel’s position vis a vis the Palestinian people.

Because Netanyahu wasn’t our problem; he was just the symptom of a larger disease.

To be sure, Netanyahu has been a fierce enemy of the peace process. After all, he built his career around preventing Palestinians from getting their own state. But his main adversary, Benny Gantz, while cagey about his plans, is unlikely to be any better. So far, he has refused to formally give his position on the establishment of a Palestinian state, though unofficially he has echoed Netanyhu’s rhetoric on the matter. In particular, Gantz has signaled his desire to maintain a “United Jerusalem,” and won’t withdraw to the 1967 line or leave the Jordanian valley.

Furthermore, when Netanyahu promised to annex more than 30% of the West Bank earlier this month, Gantz’s party, Kahol Lavan, immediately claimed that annexation had been their idea first.

Neither campaign addressed the injustice faced by millions of Palestinians living under blockade and occupation, who don’t have the right to vote. On the contrary, Gantz took pride in April in how he sent parts of Gaza back to “the stone age.”

In other words, the majority of the mainstream of the Israeli political establishment now favors permanent occupation in the West Bank and Gaza, a system that imprisons millions of Palestinians under military rule, without civil rights, freedom or dignity.

For that reason, Palestinians know that Netanyahu’s departure won’t usher in an end to our suffering. He was more an indicator than a cause of Israel’s drift away from peace towards brutality. Indeed, this drift is an epidemic that has overtaken the entire Israeli political spectrum, a disease that disguises itself as a cure by using empty buzzwords and doublespeak, with words like “security concerns” and “existential threat.”

This general mentality of defining Israeli victory by Palestinian defeat is the logical conclusion of the long-term impunity and unconditional support for Israel in the United States which has reached a zenith under the Trump administration. Why would someone want to negotiate a fair and just peace when there are almost no consequences whether they do it or not? The idea that “might makes right” continues to work for Israeli politicians on both the right and the left, who opt for expedience over the riskier and increasingly unpopular alternative of discussing serious solutions to the conflict.

The international community bears a significant part of the blame for Israel’s shift right. They stood idly by, watching silently as Netanyahu stirred up popular support for assaulting the peace process. But unless they signal their readiness to stand up to Netanyahu’s successor, the same story will repeat itself. As long as the rest of the world allows the status quo to continue, there won’t be any reason for Israel to have a change of heart.

We must recognize the need for change and the importance of external intervention in the form of principled positions, serious actions and genuine solidarity to alleviate Palestinian suffering until Israel is put on the right track.

Hopefully, the replacement of Netanyahu will signal renewed attention to the Palestinian cause. Because Netanyahu’s ouster on its own wont do much.

Stop Celebrating. Netanyahu Is A Symptom Of Israel’s Problem, Not Its Cause