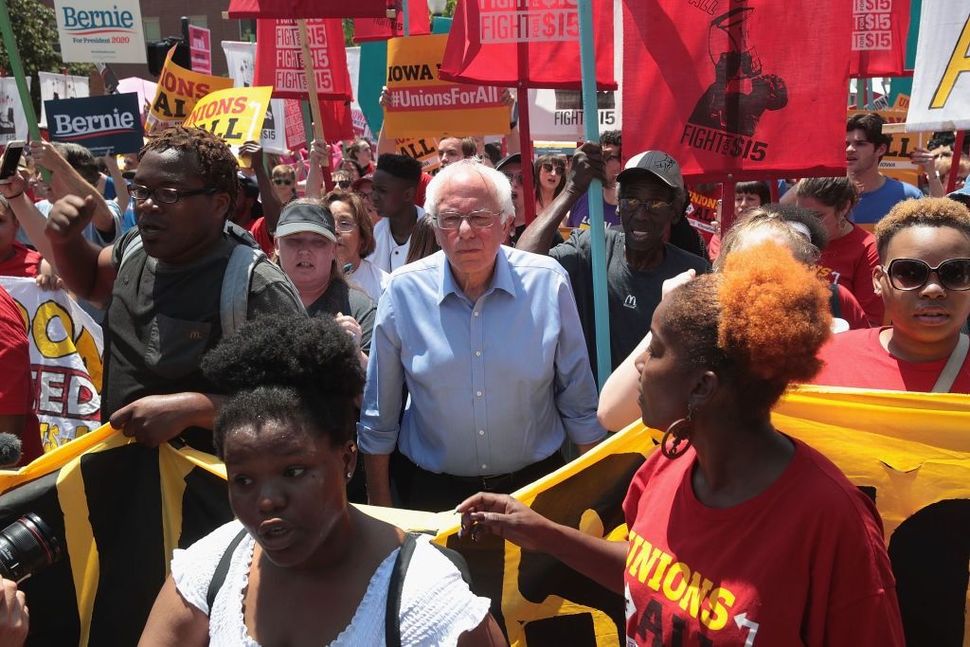 On Wednesday morning, news broke that Vermont Senator and presidential candidate Bernie Sanders was taking time off from the campaign trail after he had received two stents to the heart. He had felt some chest pain at a rally, which turned out to be a blocked artery. The Senator is currently recovering, and “in good spirits”, according to his campaign. But he will be absent from the campaign trail for the foreseeable future.

Thanks for all the well wishes. I’m feeling good. I’m fortunate to have good health care and great doctors and nurses helping me to recover.

None of us know when a medical emergency might affect us. And no one should fear going bankrupt if it occurs. Medicare for All!

As a die-hard Sanders supporter and someone who’s made up my mind to vote for him in 2020, I was devastated to read the news about his health. But I’ve been worried for the Senator for a while now, not for his physical health so much as for the health of his campaign, as former Bernie supporters seem to be defecting to Massachusetts Senator Elizabeth Warren, who’s also running for president.

Take Jennifer Owens, a 44-year-old New Hampshire resident. Owens used to be a huge Sanders fan, back in 2016. “I liked that he seemed outside the system, and that he was inspiring people,” she told me. “Bernie was the first one I heard who said the things I’d been thinking — about the minimum wage, the stock market, the structure of American business, the healthcare system.”

But this time around, Owens has switched her allegiance to Elizabeth Warren. She was struck by the Massachusetts senator, who seemed like a version of Sanders that was, well, better. Warren hadn’t been in politics for very long, something Owens liked about her. She was drawn to Warren as she was to Sanders’s outsider position in the Senate. But she was also impressed by Warren’s proven track record of working with those she didn’t agree with.

Owens is not alone. Elizabeth Warren’s campaign poll numbers are skyrocketing. In the most recent polls, she was at nearly 27% — to Vice President Joe Biden’s 25%, making her the solid frontrunner. Liberals and progressives love her. Luminaries from Jonathan Van Ness to Scarlett Johansson have thrown their support behind her.

It’s not hard to see why: She’s running a dynamic campaign, staking out a position as the candidate with the wonky plans, lending her an aura of competence. Most importantly, many view Warren as not substantively different from Sanders, except with the added bonus of being female, and perhaps easier to listen to and work with.

As Owens put it, Elizabeth Warren is a “practical, bookish Bernie.”

But this view is wrong. While Warren may be more similar to Sanders than she is to a centrist like Biden, who is also running for president, that doesn’t mean that she and Sanders are at all interchangeable.

The vision Sanders offers, unlike the one that Warren offers, is radical. It’s existentially important to progressives, because it offers a new way of doing politics in the Democratic Party. Sanders alone is offering a politics that appeals to the vast, as-of-now politically unengaged working class, as opposed to the overwhelmingly white, overwhelmingly middle class crew that makes up Warren’s base.

Let’s start with the fact that Sanders has a better, more comprehensive healthcare plan, one that will insure all Americans. Medicare for All is a central plank of his platform. Meanwhile, Warren, despite cosponsoring the bill that Sanders wrote can’t seem to decide whether she endorses the plan or not.

Furthermore, Sanders has a bigger proposed wealth tax, and a foreign policy that is more radical than Warren’s. He wants to cancel all student debt in America, while Warren plans to cap student debt relief at $50,000 per person.

Warren is similarly wobbly on K-12 education, and has not come out in support of the NAACP’s proposed moratorium on new charter schools the way Sanders has. And Sanders’ plan for “workplace democracy” — which will galvanize the labor movement in this country — is nothing less than revolutionary. No other candidate has anything like it.

It’s not just the differences in policies. The philosophies that animate the two sets of policies are different. Warren still describes herself as “capitalist to [her] bones,” and her policies, even her far-reaching economic ones, are still reforms to the system that leave it essentially intact. Sanders, who describes himself as a democratic socialist, intends to alter the system beyond recognition.

For progressives who care about such things, the choice could not be more clear.

Sanders is often accused of being uncompromising. But it’s his legendary consistency, with which he has approached every political issue of the last 30 years, which bodes so well for a Sanders presidency. It it, one can see his ability to not compromise on his principles when in office — as Obama did on so many issues that were important to progressives, from closing Guantanamo Bay to liberal judicial appointees.

Put another way, Sanders was advocating for single payer healthcare when Elizabeth Warren was an avowed Republican — a fiscal conservative still under the seductive sway of Reaganomics.

Instead of coming up with limp compromises that don’t actually change anyone’s life for the better, a Sanders presidency would harness a political revolution, would push for socialist allies in Congress to get elected, would mobilize the working class in this country to support important legislation, and would aggressively use the presidential bully pulpit to go to war with recalcitrant members of his own party, and of course, the Republicans.

It’s simply indisputable that during his 2016 run, Sanders created the seeds of a mass movement, resulting in teachers’ strikes across multiple states that won significant demands for labor and for education, as Eric Blanc lays out in his excellent book, Red State Revolt. Sanders has woken up the left in this country from its deep slumber, has revitalized organizations like the Democratic Socialists of America, Indivisible, and Our Revolution.

And let’s not forget that often, a charismatic leader is necessary to provide oxygen to a grassroots movement. If you doubt this, consider where the runaway success of the extreme right-wing that now animates the Republican Party would be without President Donald Trump.

Does achieving a successful Sanders presidency seem a little hard to imagine? Maybe. But who could have imagined six years ago that out of nowhere, a little-known senator from Vermont would upend politics so much that socialism would cease to be a dirty word in large swathes of this country? For that matter, who could imagine that, within the span of a few years, a largely homophobic country would change its views on gay people so much that gay marriage would become legalized in all 50 states? Who would have imagined that within a decade, a non-violent uprising in the South would shift public opinion and force real legislative and social changes to end the system of racial subjugation known as Jim Crow?

Political miracles happen. It’s time to think big, my fellow progressives. That it will be difficult is not a reason not to try.

Don’t settle for the political convenience of a reformer when you can have a revolutionary.

Jaya Sundaresh is a journalist and a writer. She has lived all over the Northeast, in Canada and India, but calls Brooklyn home. You can find her at @shutupjaya on Twitter.