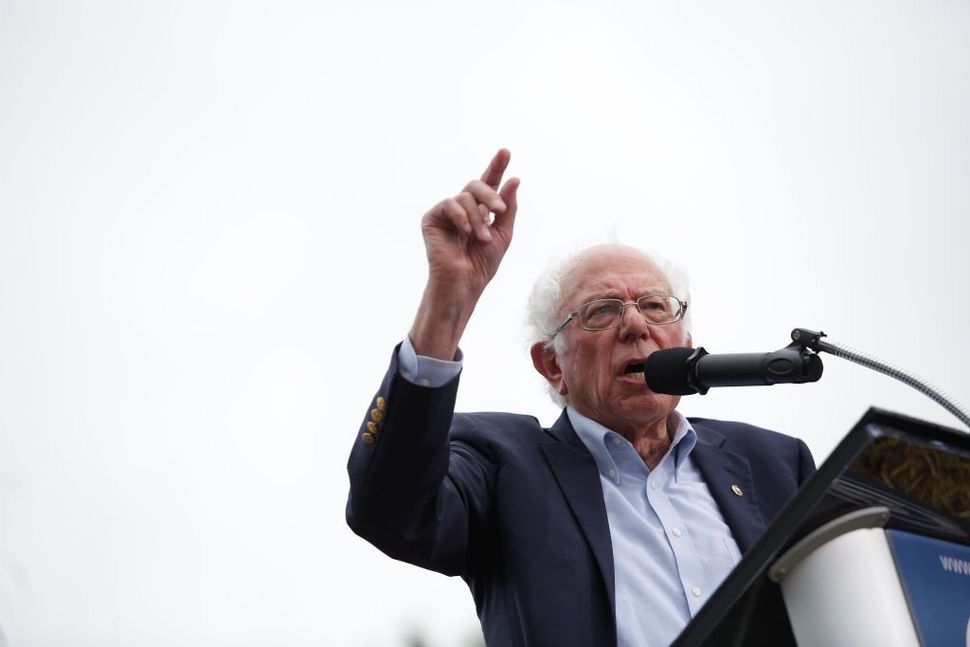 Since launching his first campaign for the candidacy for the Democratic nomination, there’s been no shortage of ink spilled debating Bernie Sanders’s Jewishness. Scrutiny — often unfair — hinging on Sanders’s criticism of Israel, disinterest in synagogue, and non-Jewish spouse — has turned into an exercise in exclusion.

Yet elsewhere, the senator has been seized as a symbol for the Jewish Labor Bund. Articles have abounded in both Jewish and non-Jewish press linking him with the Bund and the Yiddish socialism it espoused.

This is no surprise; with his outspoken belief in Democratic Socialism and Midwood roots, Sanders seems a natural symbol of the Bundist tradition and the Jewish identity it provides.

The Bund emerged from the Marxist movement sweeping through Russia at the turn of the century. Accordingly, it sought to unite Jewish workers with neighboring proletariats to build a socialist order. However, circumstances in Russia, where Jews faced discrimination and violence not unlike that of African-Americans, convinced the Bund that class-based organization was not enough: If Jewish workers were liberated as workers but oppressed as Jews, then they would not be free.

Rather, in an early articulation of what we today call intersectionality, the Bund sought to combine the revolutionary struggle of the working class with the Jewish struggle against anti-Semitism. It was this understanding that in many ways defines Bundism, from contemporary Melbourne, where a chapter continues today, to nineteenth-century Russia.

Yet it is also exactly these politics that Sanders has shied away from. While his thinking has evolved on the matter, his skepticism toward intersectional politics is no secret, and he continues to prefer organizing on the basis of class above other factors. There is something particularly Jewish about his politics, but it is not the Jewishness of the Bund. To find it, we must look elsewhere.

The Bund was only one of the socialist movements popular among Jews in Russia at the turn of the century. Alongside it was the Russian Social Democratic Labor Party (RSDLP), which the Bund was for a time a part of.

After the Bund left the RSDLP in 1903 due to disagreements about its emphasis on Jewish politics, the RSDLP split into two factions. The first, the Bolsheviks (Majoritists), are well-known as the eventual rulers of Russia and builders of the Soviet Union. The second, the Mensheviks (Minoritists, so-called because once the Bund — who supported them — left the party, they were the smaller faction), faded into history after the Bolshevik victory in 1917.

Though radical by today’s standards, the Mensheviks had a reputation for moderation, especially in comparison to the militant radicalism of the Bolsheviks. In many ways they embodied much of what we today think of as Democratic Socialism. Firmly dedicated to improving the legal status and working conditions of Russia’s laborers, they looked positively on the democratic process and remained committed to a regime of civil liberties. Notably, they remained skeptical of efforts to organize on the basis of nationality, complicating their relationship with the Bund.

In her article Jewish History beyond the Jewish People Lila Corwin Berman suggested that instead of asking “who is a Jew,” we ask how Jewish identity manifests in a given space. The Mensheviks were not a Jewish party, yet they claimed a number of Jewish members. Notably including Julius Martov, Pavel Akselrod, Fyodor Dan, and others, the Jewish Mensheviks were part of the same political awakening in Russia as the Bund and Zionists, an awakening that unfolded among Jews along the full spectrum of possibility, between the particular and the cosmopolitan.

For Jewish Mensheviks, the Bund’s politics of class and nation were frightening. Disdaining the Jewish autonomy sought by the Bund as little more than a new ghetto, they feared that formally sanctioning national division contradicted the international solidarity they saw necessary to building a better world.

Their politics did not manifest in an explicitly Jewish organization. But there is something specifically Jewish about the concerns driving Jewish Mensheviks in that direction.

The Mensheviks are hardly the only occasion where Jews have followed particular concerns in a universalist direction, but they are the group most closely associated with the Bund, and by extension, with Sanders. In the United States, for example, Anna Strunsky Walling was inspired by the Kishinev Pogrom to begin organizing the NAACP. Fifty years later, the descendants of German-Jewish refugees followed a similar path, as memories of their own families’ experiences with anti-Semitism inspired them to play a conspicuous role in the activism of the 1960s. But so long as Eastern Europe remains the default model for authentic Judaism, it is the Mensheviks who best resemble Sanders’s politics.

Sanders’s Jewishness clearly matters to him; anyone who has heard him speak of his family or youth can see that. The scrutiny Sanders has faced regarding his Jewish identity reflects a perverse form of gatekeeping, one that seeks to diminish the Jewish people.

His politics simply reflect a different tradition than that of the Bund, an aspect of Jewish heritage that spun off in the universalist direction. His Jewishness is not unlike that of Martov — or for that matter, Rosa Luxemburg or Emma Goldman — and his politics hinge on the assumption that the best way to fight persecution — whether of Jews, or for that matter, any people — is through the use of class as the great equalizer, an organization that tolerates no division on the basis of race, ethnicity, religion, or gender.

Whether these politics will serve Sanders well — either as a candidate or, potentially, as a president — remains to be seen. The Mensheviks probably were wrong in their time, that no union based on class could overcome the anti-Semitism of the late Russian Empire. However, America is not Russia, and ultimately, time will tell.

Yet as far as the Jewishness of Sanders’s politics is concerned, there can be no doubt. Even Sanders’s hesitance to discuss his Jewish identity — long a target of criticism — should be best understood not as a denial of identity, but a practice of it, an assertion the best way to fight persecution is for all oppressed groups to work together, and that the best way to work together is to focus on what unites across society’s fault lines, and not on what divides.

Jewish politics have been and continue to be a mixed multitude of ideas, reflecting the vastness of the Jewish experience. The revival of interest in the Bund, and the effort of neo-Bundists today, is wonderful.

The desire to create a progressive space in which Jewish concerns are not merely accepted but seen as inherently necessary to the progressive cause is a welcome development. There is much to like about a political belief that treats the diaspora as a vibrant and valuable space in the Jewish world and not as a problem to be solved.

But these are not the politics of Sanders. To shoehorn him into a Bundist tradition that he does not fit lessens our ability to understand the full vibrance and possibility of our Jewish community.

Joshua Meyers is a Harry Starr Fellow at Harvard University specializing in the history of modern Jewish politics. He can be reached via twitter @DrJoshMeyers1.