The ADL’s data proves it: The right owns anti-Semitism in America 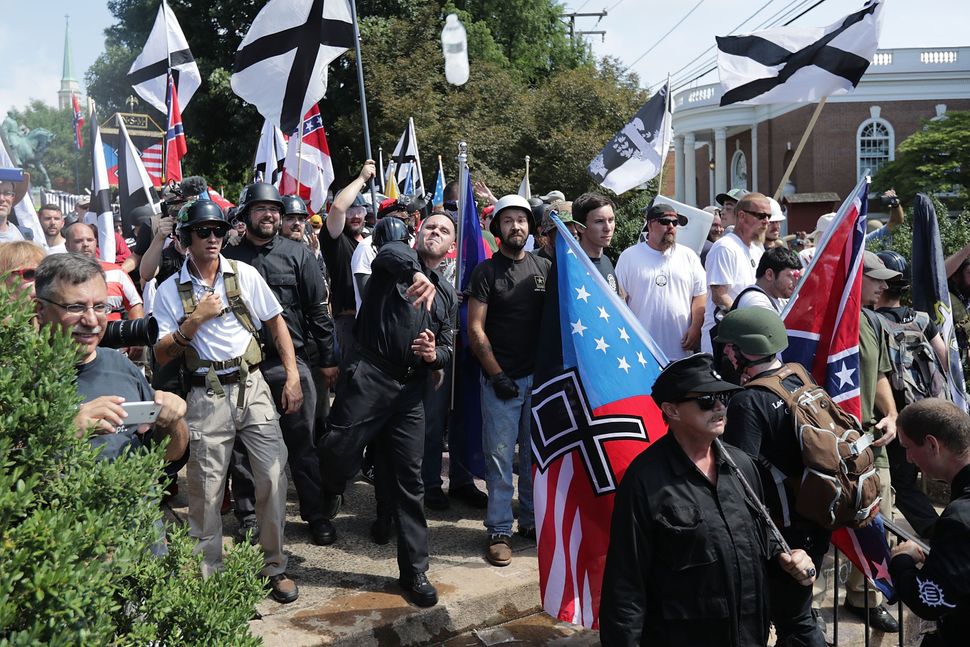 CHARLOTTESVILLE, VA – AUGUST 12: Hundreds of white nationalists, neo-Nazis, KKK and members of the “alt-right” hurl water bottles back and forth against counter demonstrators on the outskirts of Emancipation Park during the Unite the Right rally August 12, 2017 in Charlottesville, Virginia. After clashes with anti-facist protesters and police the rally was declared an unlawful gathering and people were forced out of Lee Park, where a statue of Confederate General Robert E. Lee is slated to be removed. (Photo by Chip Somodevilla/Getty Images) Image by Getty Images

These are anxious times to be an American Jew.

Of course, every time is an anxious time to be an American Jew. As a New York-born Ashkenazi Jew, chronic anxiety is as much a part of my cultural heritage as bagels and schmear. Trust me, if there isn’t some genuine threat to my safety, my mind is perfectly capable of inventing one. These days, of course, there’s no need to invent a threat. There’s no denying that these are perilous times for American Jews. A survey conducted by the American Jewish Committee last October found that fully 84% of American Jews think anti-Semitism in the United States has increased in the past five years, while 42% believe that the status of Jews in the US is less secure than it was just a year ago.

And now we have the concrete numbers to back up our fears: The Anti-Defamation League just released its annual audit of anti-Semitic incidents for the year 2019, and the numbers are as grim as you would imagine. For once, at least, my anxiety appears to be entirely justified.

In 2019, the ADL recorded 2,107 anti-Semitic incidents in the United States, a 12% increase from just a year earlier in 2018, and the highest number on record since the ADL began collecting annual data on American anti-Semitism in 1979. Instances of harassment were up by six percent, vandalism was up by 19%, and anti-Semitic assaults rose by a terrifying 56% since 2018. There’s no denying it: The numbers are bad.

But in addition to the horror at these numbers, there’s also a political lesson here for the American Jewish community, if we are open enough to learn it.

To be clear, the left is not blameless in the rise of anti-Semitism in the US. And, of course, Jews in other countries such as the United Kingdom face very different threats. But the ADL’s US numbers suggest that out of the 270 anti-Semitic incidents committed by known political extremists in the US in 2019, at least two-thirds were committed by known white supremacist groups.

Even among those anti-Semitic incidents specifically motivated by anti-Israel and anti-Zionist sentiment, traditionally the focal point of so-called “left-wing anti-Semitism,” the ADL found that the single largest source was white supremacist groups.

Many of these white supremacist anti-Zionists attack what they perceive as “Zionist control” of the US government and financial system, and use the phrase “open borders for Israel” to express their belief that, in the ADL’s words, “American Jews are manipulating U.S. immigration policy in order to undermine the U.S.’s white majority population while at the same time hypocritically demanding a pure Jewish ethnostate in Israel.” This is pretty far afield from a left-wing anti-Zionism motivated by concern for Palestinian rights.

Meanwhile, of the three deadliest anti-Semitic attacks committed in 2019, in Poway, Calif., Jersey City, N.J., and Monsey, N.Y., the ADL found that one attack, the Poway attack, was motivated by far-right white nationalism.

The Jersey City attack, meanwhile, seems to have been motivated by Black Hebrew Israelite ideology, which the ADL characterizes as neither left- nor right-wing, while the Monsey attack seems to have had few identifiable ideological motivations. According to the ADL’s findings, none of these deadliest anti-Semitic attacks in 2019 were committed by left-wing extremists.

And that much-hyped explosion of left-wing campus anti-Semitism that is attracting so much attention from the American Jewish community? It’s fake news, according to the ADL’s anti-Semitism audit.

The ADL found that anti-Semitism on American college and university campuses actually decreased in 2019 for the second year in a row, even as anti-Semitism rose dramatically nationwide. Nor is “campus anti-Semitism” synonymous with “left-wing anti-Semitism.” Out of the anti-Semitic incidents which the ADL documented on American campuses, only 20% involved references to Israel or Zionism at all, compared to the 35% that involved swastikas and 14% which involved the distribution of white supremacist materials.

And when we have a US president who says that neo-Nazis who chant “Jews will not replace us” include some “very fine people” among them, and who shares the very same conspiracy theories about George Soros funding migration to the US from Central America that are cited by synagogue shooters, it’s no wonder that more than half of American Jews place substantial responsibility on the Republican Party for rising anti-Semitism in the US today. (By comparison, fewer than one in five American Jews consider the Democratic Party to be equally culpable for anti-Semitism.)

Despite these findings, the ADL has gone to great lengths to conceal the political implications of its new anti-Semitism audit. In the past, the ADL has called on Congress to avoid the “politicization of anti-Semitism” and the ADL’s press release about its new audit seemed to deliberately avoid using the words “left” or “right,” instead referring only to “extremism.” You have to spend more time digging into the ADL’s findings to learn what the ideological source of most of this non-specified “extremism” actually was.

So, if the ADL’s findings about the main source of anti-Semitism in the US are as clear as they are, and if most American Jews ourselves know that at some level, then why are our community institutions so insistent that “American Jews affiliated with both parties view the far right, the hard left and extremism in the name of Islam as anti-Semitic threats,” in the words of Avi Mayer of the American Jewish Committee?

Why not call out the most significant ideological source of anti-Semitism in the United States for what it is? Why is the ADL’s messaging downplaying what its own findings uncovered?

BREAKING: Antisemitic incidents in 2019 were at an all-time high.

Some of it no doubt has to do with the disproportionate influence of right-wing Jews in the Jewish institutional community in the US, who have enough power to delay the nomination of the former leader of immigrant aid-organization HIAS to chair the Conference of Presidents of Major American Jewish Organizations, despite the fact that HIAS is much closer to the median American Jewish opinion on immigration than its critics are.

NEW TONIGHT: In email to its members, @Conf_of_Pres announces that Arthur Stark will remain chair for another year

Dianne Lob will serve as chair-elect until April 1, 2021 at which point she’ll become chair https://t.co/ZNLj29CYjj

And some of it no doubt has to do with a desire to maintain good relations with the Netanyahu government, whose growing ties with the international far-right led Netanyahu to publicly contradict a report by his own government researchers finding that the far-right posed the greatest threat to Jews in Europe. (This finding was recently confirmed by a German anti-Semitism monitor.)

But I suspect the Jewish institutional community’s refusal to call out the ideological source of most American anti-Semitism is not entirely about the influence of right-wing Jews, or about Israel. I suspect some of it has to do with a deeper sense that the work of the American Jewish establishment ought to be above the fray of politics, to operate in the sphere of what historian of American Judaism Lila Corwin Berman terms “depoliticized politics.” In Berman’s words, instead of identifying themselves as partisan, American Jewish organizations “characterized their work as reflecting consensus and nonpartisan communal interests.”

And now this studied insistence on remaining above partisan politics has left us in the odd position where the ADL is refusing to be forthright about its own findings in its public messaging about the 2019 anti-Semitism audit, for fear of being accused of partisanship. The ADL is burying the lede on its own story.

So yes, we should continue to call out anti-Semitism wherever we see it, right and left. But these are scary times to be an American Jew, and refusing to be honest about the biggest source of the threats we face will not make us safer.

Anti-Semitism is not somehow above partisan politics. It is political, and it’s long past time for us to say so.

The ADL’s data proves it: The right owns anti-Semitism in America