Roundtable | What we hope to see in Biden’s inaugural address 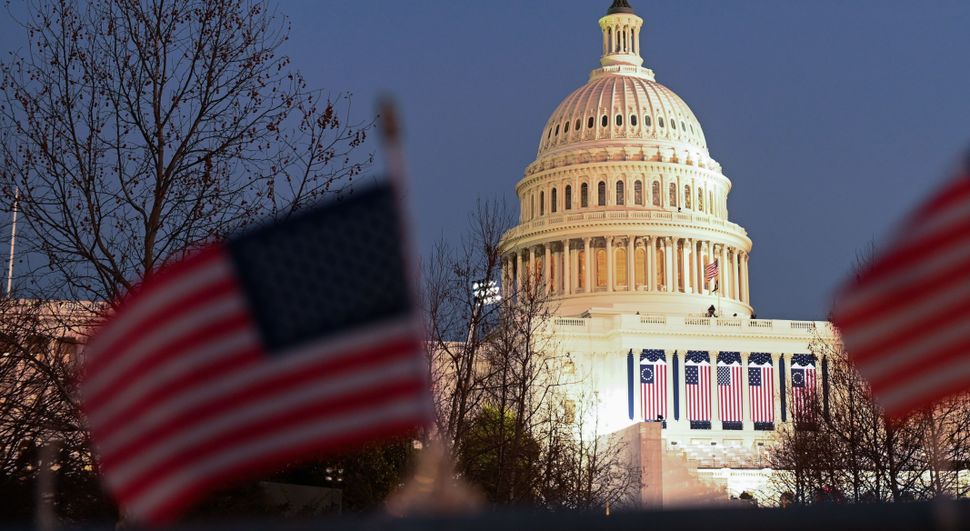 The Capitol Building in Washington, D.C. on January 19, 2021, ahead of the 59th inaugural ceremony for President-elect Joe Biden and Vice President-elect Kamala Harris. By ROBERTO SCHMIDT/Getty Images

It’s inauguration day, the day on which we enact the greatest ritual of American democracy: the transfer of power.

Between the restrictions necessitated by the coronavirus pandemic and the substantially heightened security imposed following the Jan. 6 Capitol riot, President-elect Joe Biden’s inauguration will be like none other before it. His predecessor, President Donald Trump, will not be in attendance, another break from the norm.

And yet the core routines will persist, including the newly-inaugurated president’s first address to the country as Commander-in-Chief. We asked some of our regular writers what they most wish to see in Biden’s inaugural speech; these are their answers.

I’ll be listening for what Joe Biden has to say to the people who voted for Donald Trump. Not all 74,223,744 of them. I don’t think the thousands who stormed our Capitol on Jan. 6 need to be addressed, but I hope Biden has the courage to clearly distinguish those riotous insurrectionists who want to destroy our democracy from the vast majority of Trump supporters who just want it to work better.

This is a moment to draw bright lines: those who reject fact and science and vote tallies and court rulings are outside the bounds. But those who simply disagree, even passionately, about how best to run the country are still part of the country. Those disagreements used to be what made America great — not what threatened to tear it apart.

So I want to know that Biden sees the difference between the people plotting a violent coup on the dark web and the people who just don’t like his health-care plan. I want him to promise to be president of the whole country, to represent anyone willing to fight fair and accept the result, to engage those who see the world differently and try to serve their interests, too.

Our new president can be expected to reiterate the ambitious and laudable plan he announced to deal with the COVID crisis, both with regard to streamlining vaccination and to address the economic situation. May God grant him success in those endeavors.

I would also like to hear him say, clearly and straightforwardly, that the far-right extremists who invaded the Capitol on Jan. 6 are a clear and present danger to the nation, and need to be undermined by every legal means possible. He would be wise to note that such people, while they may have famously latched on to the former president, were essentially using Trump. They existed no less noxiously when Trump was a mere television personality, and will persist when he is gone from the national scene.

It would be heartening, too, if Biden would reassure the near-half of the electorate that did not vote for him that he intends to take their concerns seriously — especially about the right of religious Americans to live freely by their beliefs, even when those convictions might clash with contemporary mores.

A strong condemnation of white nationalism

So many horrible things have happened in the past four years that Joe Biden needs to repudiate, in order to move forward with his own administration, that it feels hard to know where to begin. But as an Ashkenazi Jew from New York, for whom chronic anxiety is practically my birthright, I would particularly like to see Biden call out white nationalism and white supremacy, in forthright and clear language. After marchers wearing “Camp Auschwitz” apparel descended on the U.S. Capitol, we need to hear him reaffirm what the Department of Homeland Security has found, and what the Trump administration tried to suppress for ideological reasons: that white nationalism is the most dangerous terror threat facing the United States right now.

Biden should not hold back his rhetoric in the name of some anodyne gesture at healing. We cannot heal as a nation until we’re willing to confront and to name the very real threats we face. And he needs to name the source who did the most to feed and embolden the dramatic rise in white nationalism and antisemitism over the past four years: President Donald Trump.

After all of the anxiety and terror of the past four years, it might feel tempting for Biden to issue a bland plea for national unity and healing, for us all to come together as a nation, regardless of our political differences. But Jews, of all people, should call on Biden to resist this temptation. We cannot heal as a nation until we cure ourselves of one of our most serious sicknesses. Biden needs to say that he is committing the full resources of the U.S. government to investigating and combating white nationalist groups — which has to include investigating law enforcement organizations across the U.S. for white nationalist and far-right sympathizers who have infiltrated police departments. Until Biden does this, no Jews or other minority communities will truly feel safe in this country.

Honesty, and a promise of change

The first inauguration I remember watching was President Barack Obama’s in 2008. In my third-period Constitutional Law class — yes, really: high-school Con Law — we gathered around a small television and looked on with a solemnity rare for teenagers. It was clear, sitting in our majority-minority public high school, that we were watching something in the country fundamentally change.

I’ve shed some of the ideals my 15-year-old self brought to that day. But what I hope for today is to experience something of that same sense of change. It is so desperately needed, after this awful year: 400,000 Americans, and counting, lost to the coronavirus pandemic; a terrifying riot at the Capitol; a prolonged, deeply deceitful attack against the basic democratic systems that, in that Constitutional Law class, I first learned to celebrate. The systems in place have not served many of us especially well. So a forceful argument for a stronger, kinder future, and a clearly drawn idea of how to get there, will be welcome.

A genuine attempt to bridge divides

Inaugural addresses are traditionally tone-setters, speeches wherein incoming or re-elected presidents list their legislative priorities and agendas for the upcoming term. As someone who did not vote for President-elect Biden, I imagine there will be precious little in that agenda that I will find compelling. He will be playing to an audience I am not a part of.

At the same time, presidents typically try to strike a somewhat conciliatory tone in their inaugural speech, assuring the public that they are the president of the entire country, not just the people who voted for them. Even Donald Trump used that oratorical device in 2016, talking about how his inauguration was a moment for “everyone watching all across America,” and how the oath he took was “an oath of allegiance to all Americans.”

But it never really is that way. It is just rhetoric — a way for the speaker to claim that what they desire is the genuine good and in the true interest of all decent people. There is never a real nod to what drove half of the country to choose the other candidate — and that is why these professions of unity always ring hollow.

So, here is to hoping Joe Biden can break this mold, and express actual validation for the thoughts, priorities and fears of the 74 million people who voted for his opponent. Even while advancing his agenda, doing so can go a long way toward bridging the divides we now live with.

The best inauguration speeches — think Washington, Lincoln, Kennedy — are exercises in national storytelling. At moments of crisis, presidents have told us where we have been, where we are and where we might go. An inauguration is a beginning, but it also looks forward and backward to capture a moment in context. Anything is possible with a good story. That is what America has always been about, even if sometimes we have lost the plot.

Jews are also storytellers, believers in the power of narrative to sustain and strengthen us through difficult periods. We meet our future because we have internalized our past.

When Joe Biden takes the stage Wednesday behind security fortifications more reminiscent of Baghdad’s Green Zone than the traditional image of American democracy, he needs to remind a ragged and raw country of its character and how to right itself. Four years of Donald Trump and nearly one year of a grueling pandemic have left us battered and mistrustful, frayed and fractured. We no longer trust our government to protect us, or one another to share values and ideals. We need reasons to believe that tomorrow will be better, today.

Biden was elected because he speaks the language of America fluently: he is a talisman from a time that seems simpler than our own. But capturing this moment will require more than sounding the good old notes of nostalgia. It will demand weaving together the certainties of the past and the doubts of 2021. It will mean telling us that the country that elected Donald Trump also chose not to re-elect him, and that extremists on all sides occupy not the main stage of American destiny, but its cranky corners.

We need a story that feels fresh and foundational. We need Joe Biden to tell us who we might yet still be.

A true reckoning with disinformation

After reciting the oath of office before Chief Justice John Roberts on Wednesday, Joe Biden will address the country for the first time as its duly elected leader. He will approach the presidential podium for the first time with high expectations but a low bar to clear: He has already defeated a historically dishonorable and derelict incumbent.

What, then, will he say? Biden is expected to speak on the theme of unity. As naive as that desire is, clearly it will be a pleasant tonic compared to four years of bile. Biden may not actually achieve anything close to “unity,” but we can count on him to not aggravate the multiplicity of American divides — race, gender, class, religion, culture, citizenship and so on.

But what is it that he should say and probably won’t? In my dreams, Biden will directly diagnose the cancer eating away at the insides of American democracy: the un-reality inhabited by tens of millions of Americans intoxicated by the lies of Trump and his hucksters. The United States is and must be a pluralistic society, but #StopTheSteal — our very American “stabbed in the back” myth — cannot coexist with a facts-based reality. Biden’s inclination will not be to use the inaugural address to challenge those baselessly undermining his legitimacy. But he must know this lie will not disappear on its own, and must be actively refuted whenever it rears its orange visage.

Roundtable | What we hope to see in Biden’s inaugural address