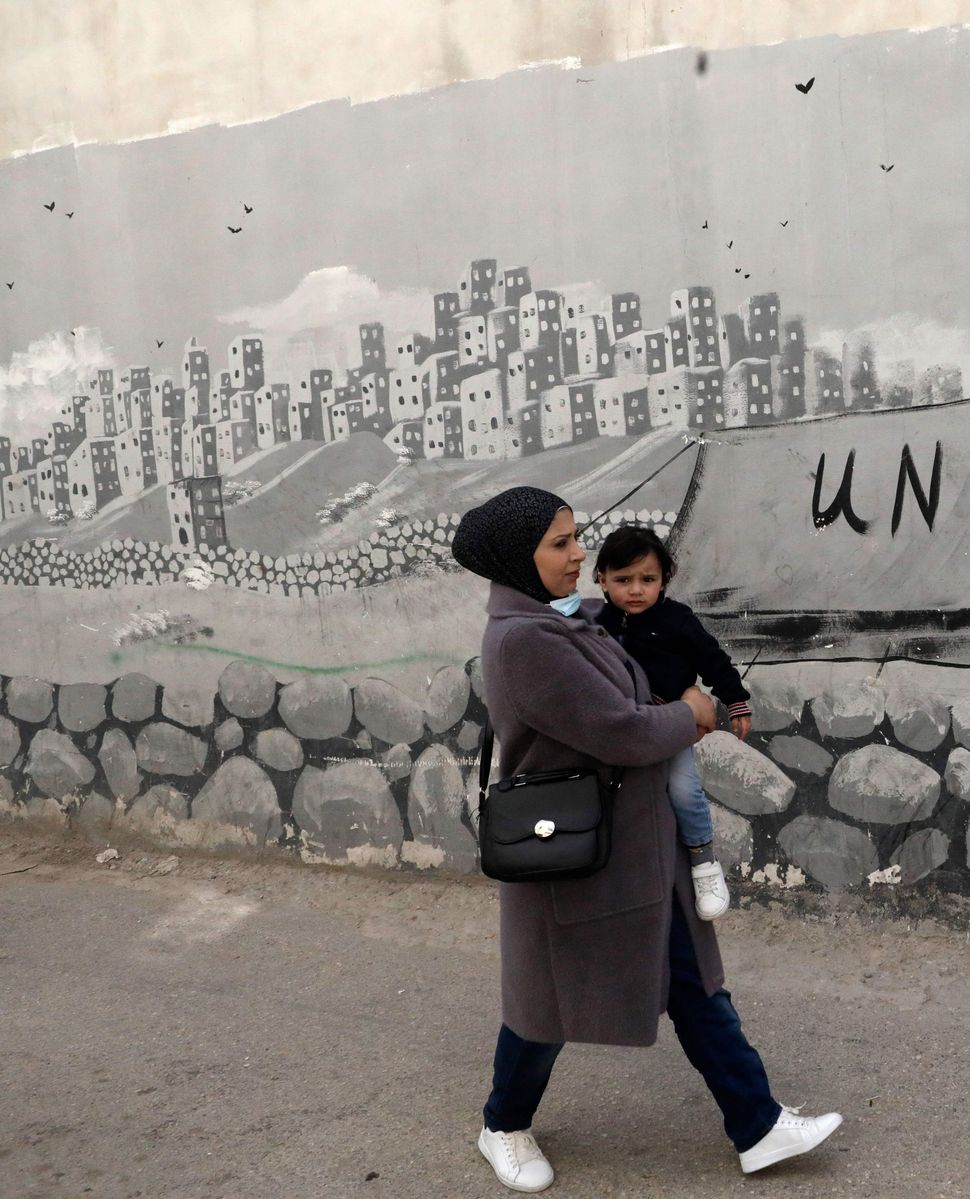 A woman walks while carrying her child at al-Fawwar refugee camp southwest of Hebron in the occupied West Bank on April 8, 2021. By HAZEM BADER/Getty Images

The package comes as part of what the Biden administration described in a press release as its commitment “to advancing prosperity, security, and freedom for both Israelis and Palestinians in tangible ways in the immediate term.” A refreshing choice of words, given that the last administration didn’t believe that Palestinians deserve security or freedom, let alone genuine prosperity. Symbolically, the restoration of aid is a refreshing acknowledgement of the basic humanity of Palestinians and the rights that humanity entails. It restores recognition of the unsolved issue of Palestinian refugees, pending a just solution, after the Trump administration defunded the institutions that keep them alive.

But despite the best intentions of Biden’s team, the aid package includes critical shortcomings.

Let’s start with the good news. The timing of the aid announcement, which will restore funding to, among others, the United Nations Relief and Works Agency for Palestine Refugees (UNRWA) and peace-building initiatives, couldn’t be better.

The West Bank and Gaza Strip have been ravaged by the COVID-19 pandemic, with current daily infection rates almost 10 times those in Israel. The already-struggling Palestinian economy has been lying in tatters, with a deficit of about $760 million at the end of 2020. UNRWA, which is akin to a mechanical ventilation system that keeps life going in the most impoverished Palestinian areas, has been on the brink of collapse. It struggles to secure funding to even pay its personnel, teachers and health care workers.

Anyone pondering the state of misery, despair and hopelessness in the occupied territories can instantly see a recipe for disaster. This is something the Biden administration understands. The press release explained that the intent of the aid package is to provide “hope and stability.”

And the package will go some distance toward that goal. It will bolster necessary services: for instance, the $150 million in funding for UNRWA will help keep the organization alive and enable it to continue providing education for 500,000 Palestinian children, as well as health care and food to millions more, especially in Gaza, where 80% of the population is dependent on humanitarian aid. By prioritizing UNRWA, the Biden administration is acknowledging the crucial role the organization plays in keeping life going in the occupied territories, a fact that even Israel’s own defense establishment doesn’t dispute.

But it’s important to remember that the $150 million contribution to UNRWA in Biden’s package is less than half of the $360 million that the U.S. annually gave to UNRWA before the Trump administration. Especially after three years of no U.S. funding, the pledged amount is simply not enough to put UNRWA on safe grounds financially.

Just as significantly, the aid package prioritizes humanitarian relief, stabilization and containment over progress and change. Ensuring UNRWA’s humanitarian services continue is vital to maintaining stability, yes. But without simultaneous efforts to build on that baseline and establish a reality in which Palestinians are afforded more opportunities — rather than being indefinitely stuck on the receiving end of barebones aid — those services function as Band-Aids.

What Palestinians really need is a systematic overhaul of political and economic barriers to development. Humanitarian painkillers cannot remedy fundamental political problems like the occupation or the blockade on Gaza.

Biden’s administration has the means to work toward small yet bold steps to address the problems at the root of our need for aid.

For example, it could fund and facilitate the establishment of job-creating industrial zones in the West Bank and Gaza, perhaps bringing Israeli and Palestinian workers together. It could push Israel to reduce crippling restrictions on the movement of goods and individuals in and out of the West Bank and Gaza, as well as between them. Since 2019, Netanyahu has allowed a symbolic 5,000 Gazans to work in Israel, a situation that has caused no security troubles. Biden could push to raise that number, facilitating economic integration among Gaza, the West Bank, Israel and the outside world, and increasing Palestinian economic autonomy and independence.

Biden’s team should also work toward improving the infrastructure in Gaza and put an end to a reality in which hospitals, schools and industry operate with only eight hours of electricity per day. They might focus on creating spaces that bring Palestinians and Israelis together to end the dehumanization of the unseen other by, for instance, pushing Israel to allow Gazans and more Palestinians from the West Bank to study in Israeli universities, and the other way around.

The point: meaningful and substantial change means moving toward progress rather than containment, development rather than humanitarianism, and mutual trust-building rather than separation.