With Israel (maybe) about to get a new prime minister, a look back at an old one (and his wife) 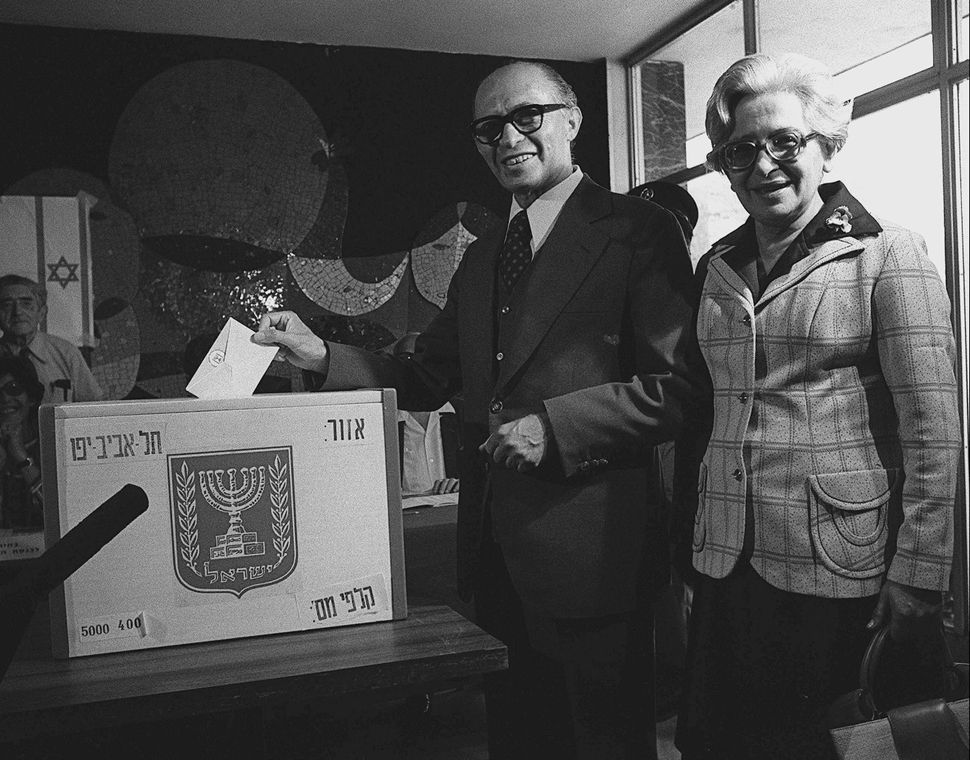 They met in pre-war Eastern Europe when she was 17. He was Poland’s chairman of Betar, the revisionist Zionist youth movement founded by Ze’ev Jabotinsky, and came to her family’s home to raise money. “He fell in love with her immediately,” recalls Arye Naor, his longtime colleague.

They married two years later, but then World War II broke out and he was put in a Soviet labor camp. She smuggled a bar of soap into the gulag etched with three letters: O-L-A, the Hebrew word for immigrant to the land of Israel. Reunited in what was then British mandatory Palestine in 1942, they were together, partners, until she died in 1982 — while he was in Los Angeles.

“Lamah azavti otah?” Why oh why did I leave her? a friend recalls him weeping when he heard the news. The next year, amid outrage over Israeli complicity in the massacre at the Palestinian refugee camps Sabra and Shatila in Lebanon, he resigned and was barely seen in public again. (He died in 1992.) 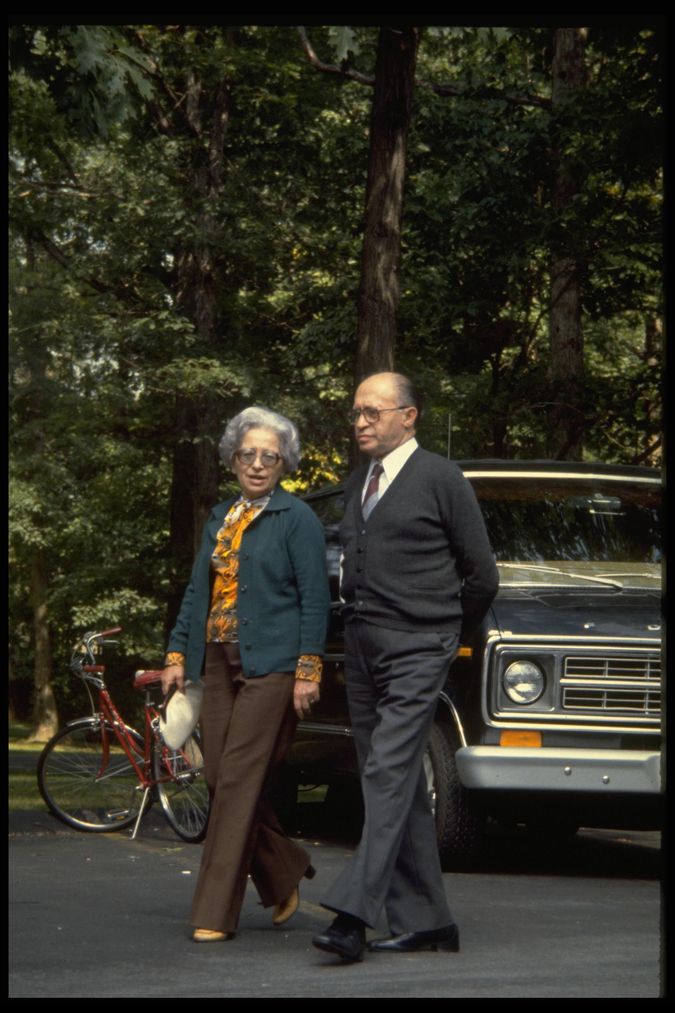 Begin and his wife at Camp David Photo by Moshe Milner

He was Menachem Begin, Israel’s sixth prime minister and the subject of the documentary “Upheaval,” which will be released on Monday via Facebook Live (sign up here to watch). She was Aliza (Arnold) Begin, who The New York Times described as “strong willed but publicity shy” in the first line of her obituary.

“He was never quite the same and he himself could not go on, such was the depth of the bond between his soul and hers,” said Rabbi Meir Soloveichik, whose legendary family comes from Brest, the town of Begin’s birth, in what is now Belarus. Yona Klimovitsky, Begin’s longtime assistant, said simply: “He was completely broken.”

“Upheaval” is not primarily a love story, of course. But throughout it, I was struck by the primacy of Aliza and their relationship in producer-director Jonathan Gruber’s portrayal of Begin’s life. It reminded me of the way that documentarians and biographers of Ruth Bader Ginsburg universally emphasize the support she got from her husband, Martin.

There’s a lesson here about the essential but too-often invisible role that partners play in the lives of public figures — especially when those partners are women.

The world has been focused this week on Israel’s political leadership. A deal inked Wednesday between eight disparate political parties could spell the ouster of Benyamin Netanyahu,  the Jewish state’s longest-serving prime minister. Next in the chair would be Naftali Bennett, a right-wing former high-tech entrepreneur and leader of Yesha, the Israeli settler movement.

Netanyahu’s wife, Sara, is a character in her own right, and a key figure in the corruption scandals that in many ways led to his downfall (if this in fact turns out to be his downfall; the fragile coalition deal still has to be approved by Parliament and anybody who knows anything about Netanyahu’s political maneuvering prowess would advise against counting him out before the final curtain).

Much less is known about Bennett’s wife, Gilat, a professional pastry chef; one thing I’ve always wondered about is how their family life works because Bennett is religiously observant and told me, in a 2012 interview, that she is secular.

As we watch and wait to see what happens next with Bennett and Netanyahu, though, it’s interesting to think about other occupants of the prime minister’s chair.

Begin was the signer of  Israel’s peace treaty with Egypt in 1978 and shared that year’s Nobel Peace Prize with Anwar Sadat. He was also the leader disgraced by the Lebanon War. He helped elevate Mizrahi Jews, immigrants from North Africa and Middle Eastern countries, within Israeli society, and oversaw the rescue of Ethiopian Jews and Vietnamese refugees. He also aggressively expanded West Bank settlements and, as a leader of the Irgun militia in 1948, played a key role in the massacre of Palestinians at Deir Yassin.

Begin and his wife at Camp David Photo by Moshe Milner

I watched “Upheaval” during the recent violent conflagration between Israel and Hamas militants in the Gaza Strip, and moderated a panel discussion that will be shown after the Facebook Live premiere on Monday with Gruber, the director; Naor, who was Begin’s cabinet secretary during his premiership; Sen. Joe Lieberman; and Lahav Harkov, diplomatic correspondent for the Jerusalem Post.

The film is fascinating for Gruber’s choice to situate Begin’s story within the context of rising antisemitism in the United States and Europe today, and for its extensive use of archival interviews with Begin himself. We talked about those things on the panel, but I also asked about the love story.

“Some people would say ‘he’s a terrorist, he’s a fascist,’ but he was also a lover, and much softer,” Gruber said. “He was very sensitive to these things and understood the sacrifices that his dear wife made for him,” he added. “He understood that without her, he would have been a very different person. Who knows how she kept him so strong?”

Gruber noted that Begin ran nine times for prime minister before finally winning in 1977. And the first thing he did in his victory speech, shown in the film, was to thank his wife, quoting from the Book of Jeremiah: “And I remember the devotion of your youth, how as a bride you loved me and followed me through the wilderness,” then personalizing it with his own twist, “through a land littered with mines.”

He did the same at a state dinner at the White House in 1979. “I spoke about survival and perseverance,” the film shows Begin saying there. “Tonight I would like to thank for that ability to persevere one human being, who is here, who I met when she was 17 years old, my own wife.”

Lieberman, who centered his own wife, Hadassah, throughout his public life, said they both cried as they watched Begin’s reaction to Aliza’s death in “Upheaval.”

“It’s very moving,” he said, describing Begin as “emotionally dependent” on his partner. “It’s a lesson to all of us not just to judge somebody on his public life.”

Naor, the cabinet secretary, reminded us of a famous photograph, taken in 1978 by the legendary Israeli photographer David Rubinger, which hangs in the El Al lounge at JFK International Airport in New York. 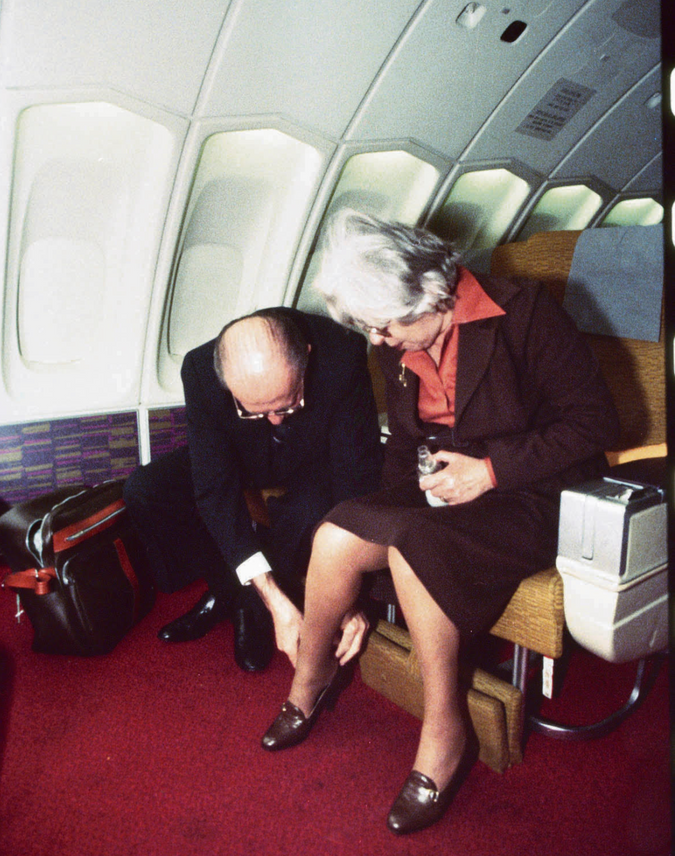 Begin and his wife Aliza on an El-Al flight.

It is an intimate photo, the kind of private moment every chronicler of public figures hopes to capture. Begin, world leader, bending to help Aliza put on her shoe as the plane lands. Begin, the husband. The man.

It is a lesson to all of us, indeed: politicians are multi-dimensional, and we should strive to understand them with nuance and complexity. Them, and also their partners. As well as our own.

With Israel (maybe) about to get a new prime minister, a look back at an old one (and his wife)