I was RBG’s rabbi. Her legacy demands we fight for human dignity and reproductive rights. 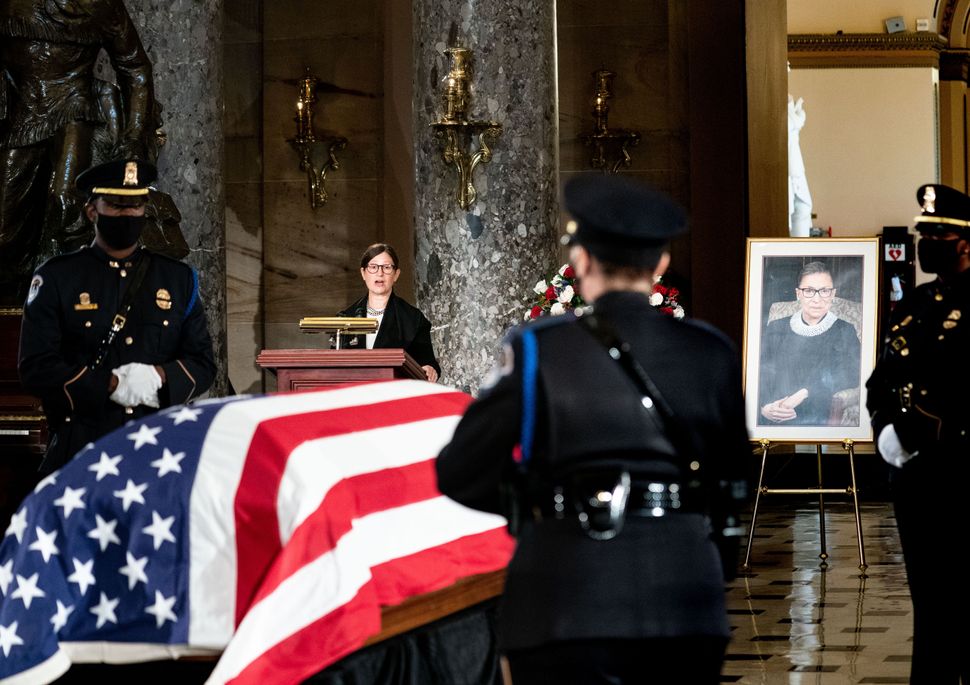 Rabbi Lauren Holtzblatt delivers remarks during a memorial service for Justice Ruth Bader Ginsburg as she lies in state in Statuary Hall of the U.S. Capitol on September 25, 2020 in Washington, DC. By Getty Images

Our collective losses as a country have felt at times unbearable over the last year. Last September, as people gathered around screens in their homes for Rosh Hashanah services, another loss was about to befall us; the death of Supreme Court Justice Ruth Bader Ginsburg. As we approach her first yahrzeit, many of us are feeling the loss of this crusader of justice, especially in a time where the tide is pushing in the wrong direction on abortion, voting rights and equality. 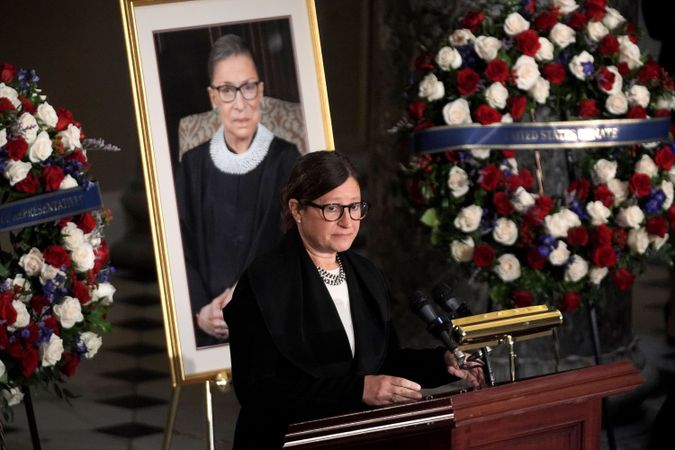 Rabbi Lauren Holtzblatt speaks during a ceremony to honor the late Justice Ruth Bader Ginsburg as she lies in state at Statuary Hall in the US Capitol in Washington, DC, on September 25, 2020. By GREG NASH/Getty Images

When I reminisce about the wisdom of Justice Ginsburg, who was my congregant and friend, I am reminded of the wisdom that she gave us not only in her legal rulings and powerful dissents, but in the way she lived her life as a mentor and teacher. She was truly the same person, fighting for the dignity of others, in all aspects of public and private life.

In the Talmud, Masechet Brachot, we are taught that “ein tocho k’boro” — a person whose inside is not like their outside, meaning that their external behavior that does not reflect their inner character — is not given a seat in the great house of study. I have often thought of this teaching when watching how Justice Ginsburg lived her life; her inside character matched the values she fought for in the world.

The justice forged a legal path for women and girls to rise to their fullest potential in the world through legal structures, and did the same in her private relationships. In 2014, I had the unique opportunity to work with Justice Ginsburg on an article about the story of Passover for the American Jewish World Service. She was keenly interested in bringing the women of the Exodus story who had created the conditions for freedom out of the shadows of the narrative: “Their names should be known, their stories should be told,” she said.

Together, we meticulously went through the heroic acts of Yocheved, Miriam, Batya, Shifra and Puah — characters who are not mentioned in the traditional Haggadah. When we finished editing the piece, the justice called to ask if she could have my permission to place my name alongside hers in the byline. I had not expected this; to just have the opportunity to work with Ginsburg was a gift, but she saw her stature as a vehicle for raising others up. This came from an ultimate commitment to the worth of every human being.

And these values were embedded in how Justice Ginsburg interpreted the foundational documents of this country. She believed that the equal protection clause of the Constitution’s 14th Amendment should guarantee human dignity for all, with an expansiveness that its framers could not have imagined.

Human dignity was a crowning value that showed up throughout the justice’s rulings, writings and relationships. This was one of the reasons that there was such an overwhelming feeling of loss when she died — for the country as well as for those of us who knew her personally. Justice Ginsburg was our crusader.

Standing at the top of the Supreme Court stairs on Sept. 23, 2020, as Justice Ginsburg’s casket was taken out of the hearse, I looked out at the myriad of clerks standing to honor her. The large white columns of the court loomed overhead; next to me, on my right and on my left, were the justice’s immediate family and her court family. There was not a dry eye.

Ginsburg was lovingly referred to as “the boss” in chambers and had a staff that she treated as family. In 2016, when her official portrait was unveiled in the court’s Great Hall, we had sat in the hallowed white marble space where her casket would eventually lay.

The justice got up to speak that day after the artist explained the intricacies and details of the painting. She stood before her eight esteemed colleagues, a room filled with the country’s best legal minds who had gathered to honor her. She proceeded to thank her family, her beloved assistants and her housekeeper, Elizabeth, saying she could not do what she does without their care and attention.

It was a classic RBG moment — “tocho k’boro,” where the inside matched the outside.

As we approached the year anniversary of her death, the Supreme Court dealt a major setback to the dignity of women to choose the course of their lives, essentially allowing Texas to enact an abortion ban by prohibiting the procedure in nearly all cases after six weeks of pregnancy. The law will have a disproportionate effect on women of color and low-income communities.

Many of us are reeling from this news. We cannot believe we are back in the dark times that preceded the 1973 Roe vs. Wade decision that legalized abortion, and there is significant concern that this moment is a foreshadowing of the court’s ruling in an upcoming case that directly challenges that landmark ruling.

During Justice Ginsburg’s Senate confirmation hearings back in 1993, she said: “The decision whether or not to bear a child is central to a woman’s life, to her well-being and dignity. When government controls that decision for her, she is being treated as less than a fully adult human responsible for her own choices.”

These words should act as our North Star, the sails in our collective ship, our marching orders. Just as Justice Ginsburg never gave up on her commitment to human dignity and the expansion of rights to every inhabitant of this country, we too must not give up. We carry on Justice Ginsburg’s legacy in the private acts of promoting dignity in our personal relationships, and when we collectively fight for reproductive rights, even when we are up against enormous barriers.

As we mark the first yahrzeit of Justice Ruth Bader Ginsburg on Monday evening, may her eternal teachings, writings and selfless acts be a well of strength for each one of us to pull on as we march forward to create a better world.

Lauren Holtzblatt is the co-senior rabbi at Adas Israel Congregation in Washington, D.C., and led memorial services for Justice Ruth Bader Ginsburg last year at the Capitol and the Supreme Court.

I was RBG’s rabbi. Her legacy demands we fight for human dignity and reproductive rights.