My husband survived the Pittsburgh synagogue massacre. Pursuing the death penalty for the shooter would make things worse 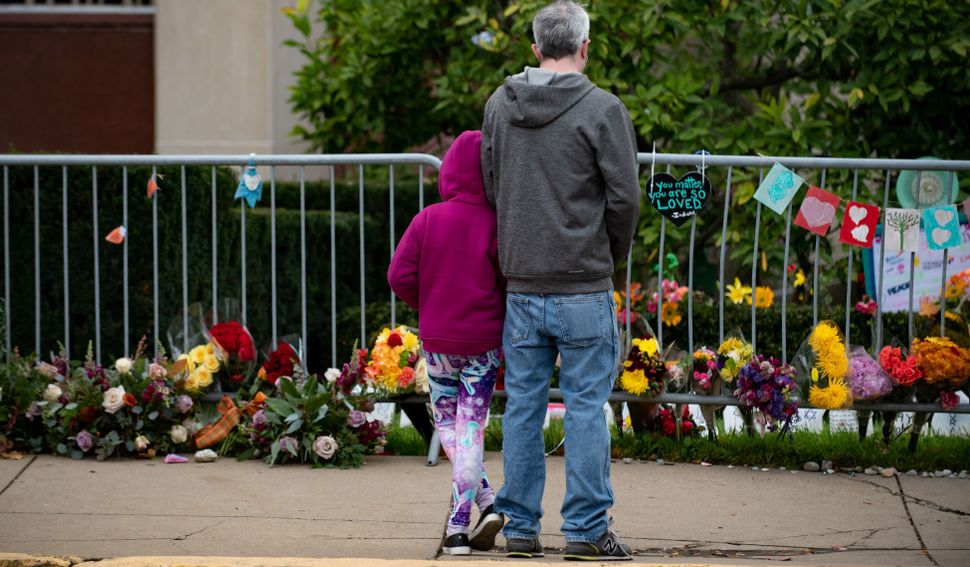 Visitors look at items well-wishers have left behind along the fence at the Tree of Life Synagogue on the 1st Anniversary of the attack on October 27, 2019 in Pittsburgh, Pennsylvania. One year ago, Robert Bowers killed 11 people and wounded several others during an attack of the Tree of Life synagogue. By Jeff Swensen/Getty Images

The capital murder case against the perpetrator of the 2018 Pittsburgh synagogue shooting is dragging on; the Poway shooter who committed his synagogue attack six months later has already received a sentence of life in prison without parole.

This week’s two-day evidentiary hearing was filled with testimony from police officers recounting antisemitic comments made by the shooter at the synagogue and in the ambulance on the way to the hospital where he was treated after his murderous rampage.

Whether or not this evidence will be admissible, and much else in the case, remains an open question. Yet one thing is certain: pursuing the death penalty would not get us closer to justice.

I am a member of the Pittsburgh Jewish community and of New Light Congregation — which, along with Dor Hadash, was one of three synagogues who shared space at Tree of Life. All three congregations lost beloved members that day.

My husband Rabbi Jonathan Perlman was present on Oct. 27, 2018 when Bowers entered Shabbat services and massacred our friends and congregants. My husband was able to hide himself and others and eventually escape. Three of our congregants were not so fortunate. Their loss is still an immense source of sorrow to their families, our congregation, and the Pittsburgh community which they were all long time members of.

Despite the suffering he has caused to so many, I do not believe that the shooter should be given the death penalty.

After speaking with other religious communities traumatized by mass shootings, I believe that a trial would be deleterious for the overall health and well-being of the Pittsburgh Jewish community. New Light congregants journeyed to Charleston in Jan. 2019 to learn about coping with a shooting in our midst from members of the Mother Emanuel Church; the consensus they shared with us was that the death penalty trial for the shooter there — still undergoing appeals — was emotionally difficult for all.

A trial would also create an opportunity for the perpetrator to air his hateful antisemitic beliefs, which need no additional exposure, in the courtroom and beyond. I fear the attention a trial will bring could encourage others with evil intention to commit copycat acts of hate.

Beyond my personal feelings, extensive research shows that there are no benefits to the death penalty for any persons related to the case. One study, by law professor Lynne Henderson, found that “many crime victims have reported that the endless repetition of their tragic stories, the formal legal rules, and the years and years between appeals only serve to increase stress and delay healing.”

Evidence also shows that the death penalty doesn’t help the families of murder victims come to any “closure,” but instead shifts focus away from other, more meaningful actions that could better honor their loved ones.

The strongest argument against the death penalty for me is a religious one. As a Jew, I believe that each individual has free will to do good or evil. The shooter committed a horrible atrocity, killing 11 innocent individuals as they worshipped on Shabbat.

Yet his life is still one given to him by God, and we as humans do not have the right to take it.

When we speak about the victims of the shooting and other Jews killed for being Jews, we add the words “Hashem yikom damam,” may God avenge their blood. Humans are not the avengers. As angry as I am that the lives of our friends and congregants were brutally ended, it is God’s responsibility, not ours, to avenge their death.

The Talmud in Sanhedrin 37b speaks of the many possibilities God may find to end the life of a criminal: falling from a roof, being trampled by a wild beast, falling into a fire, being bitten by a serpent, being attacked by brigands, being drowned or being suffocated.

I believe that the shooter will receive the punishment due to him, and that the Department of Justice does not need to hasten his demise. In fact, living with the awareness of the awful deeds he has committed may be a more painful and appropriate sentence for the shooter than ending his suffering by capital punishment.

In the end, the most important way to punish this person is to defeat his goals. His desire was to make Jews afraid to go to synagogue and to be Jewish publicly. He sought to annihilate our value of welcoming the stranger, and was enraged by our care for refugees.

The more we show the strength of our community, encouraging Jews to embody Jewish values, the more we can demonstrate the utter defeat of those who seek to harm the Jewish people. I would prefer to aid in this role, and encourage others to, than be the purveyor of yet more death in this country.

The execution spree of 13 people receiving the death penalty in the final weeks of the prior administration was cruel and morally abhorrent; I fervently hope the Federal death penalty will cease completely under the current administration. True justice for our murdered community members requires only assurance from the Justice Department that their killer will remain permanently in prison.

There is no communal value nor healing in responding to violence with more violence. Let us defy that brutal act not with murder, but with trust that there are other methods of divine vengeance beyond human capacity.

Beth Kissileff is a member of New Life Congregation which is led by her husband Rabbi Jonathan Perlman, who survived the Tree of Life synagogue attack on Oct. 27, 2018. She is the co-editor of “Bound in the Bond of Life: Pittsburgh Writers on the Tree of Life Tragedy” and author of the novel “Questioning Return.”

My husband survived the Pittsburgh synagogue massacre. Pursuing the death penalty for the shooter would make things worse