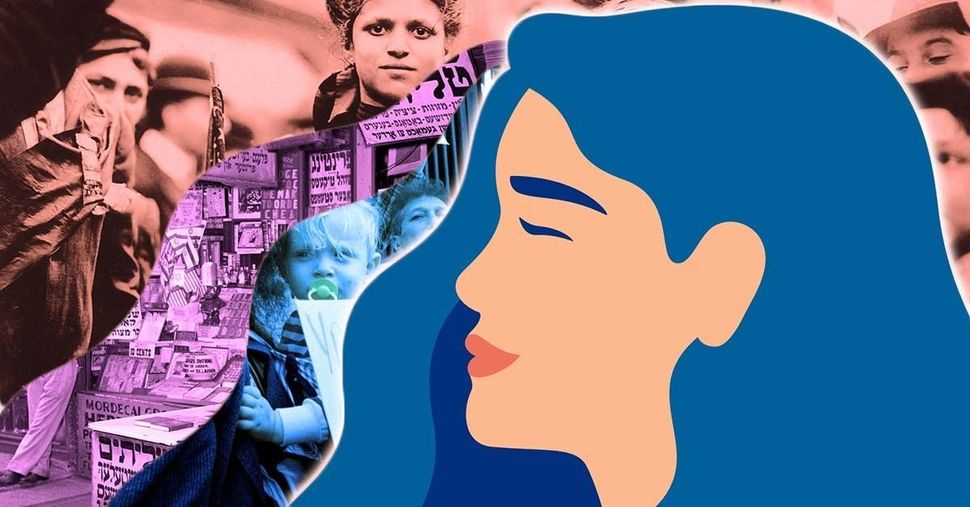 A collage of a woman with long blue hair, signs in Yiddish, and sepia-toned pictures of women. Image by Getty Images/iStock/Forward Montage When my dad was growing up in Leningrad in the former Soviet Union, he’d beat up the neighborhood kids for calling him a “zhyd”—a pejorative term for Jew that’s akin to “kike.” His flair for fighting was prophetic, as he grew up to be a professional boxer. When he and my mom started dating, she was enthralled with his brawn. But her dad—my grandpa—was not.

“A Jew fights with his pisk (mouth), not his fists,” he’d mutter.

This was certainly true for my grandpa. He and my grandma grew up in Chernivtsi where they were persecuted by both the Romanians and the Soviets. Pogroms left them homeless and some of their relatives dead. Though my grandpa eventually found work managing a supermarket, at heart he was a satirist who published an underground newsletter in Russian and Yiddish that poked fun at Jew-killing goyim.

When my family immigrated to New York, my grandparents spoke only Yiddish in the house. To me it was a hilarious language with the best insults in the world. In what other language do you wish for an umbrella to open in your enemy’s stomach? But to my grandparents, Yiddish was much more than mere entertainment; it was as resilient a language as Jews were a people, they told me. Though five million of the six million Jewish people murdered in the Holocaust spoke Yiddish, the language survived—the ultimate act of resistance against Jew hatred.

My grandparents kvelled because I spoke some Yiddish as a child. But if they were alive today, they’d be heartbroken to know that I barely remember any of it.

Compared to my relatives and other Jews who fought with both their mouths and their fists, my own resistance to antisemitism has been rather tepid: I don’t straighten my Jewish curls, I wear a Star of David from time to time, and I support Israel’s right to defend itself. But as I think about the skyrocketing antisemitic attacks we’re seeing, I want to become bolder.

In 2018 eleven Jewish people were murdered at a synagogue in Pittsburgh, Pennsylvania. In 2019 a Jewish woman was killed at a synagogue in Poway, California during Passover. Later that year five Jews were stabbed at a Hanukkah party at a rabbi’s home in Monsey, New Jersey; one man died. Furthermore, hate crimes surged in the U.S. after the Israel-Hamas war in May 2021, according to the ADL. Several Jewish men dining at a sushi restaurant in Los Angeles were kicked, punched, and attacked with bottles, while in Manhattan, a Jewish woman and her friends strolling near Central Park were pelted with eggs, causing the woman to suffer a concussion.

Jew hatred has infested every town, every segment of society, every industry. A public school administrator in Southlake, Texas told teachers to balance Holocaust books with “opposing” views. A mezuzah was ripped off a student’s door at Tufts University. A doctor at Phoenix Children’s Hospital posted on Facebook: “Hey #israel…your end is coming sooner than you think.”

Furthermore, the ice cream mavens Ben & Jerry are boycotting Israel, as is the novelist Sally Rooney. But Ben & Jerry & Sally aren’t boycotting China or Russia whose governments are also accused of human rights abuses. Not to be outdone, Dave Chappelle joked about world-conquering “Space Jews” in his new Netflix special, “The Closer.” The joke “is a case of Holocaust inversion, the claim that Jews in Israel are behaving like Nazis,” Diplomatic Correspondent and Senior Contributing Editor at the Jerusalem Post Lahav Harkov explained in the Forward.

Despite it all, or maybe because of it, a Yiddish renaissance is in full bloom. I was delighted to discover that one of my grandparents’ favorite films, the 1975 Carol Kane triumph “Hester Street” about Yiddish-speaking immigrants on the Lower East Side at the turn of the century, has been restored and is now playing at select theaters. In the spring, a revival of “Funny Girl,” about the Yiddish-accented comedian Fanny Brice, will open on Broadway. The musical, which catapulted Barbra Streisand to stardom decades ago, will star the up-and-coming Jewish actress Beanie Feldstein.

Preceding the restored “Hester Street” and the revived “Funny Girl” was a revival of “Fiddler on the Roof” directed by Broadway legend Joel Grey and performed in Yiddish. A hit off-Broadway, it may have inspired people to sign up for Yiddish classes. According to the Jerusalem Post, “the New York-based 120-year-old Workers Circle reported a 65% spike for Yiddish classes” during the 2019-2020 theatrical season.

This reflects the fact that Yiddish is gaining in popularity in secular households as Jews search for connection and identity, as the Forward reported. Yakov Blum, a co-founder of the immersive Yiddish-learning group Yiddish Farm in Upstate New York, where he also teaches, said that learning Yiddish has given him a “much more palpable and deep understanding” of relatives who were killed by Nazis. Agi Legutko, the director of the Yiddish language program at Columbia University, pointed out that Yiddish offers an alternative Jewish identity that doesn’t come from faith or Israel, where the official language is Hebrew.

By taking a Yiddish class at Columbia, high school student Naomi Handwerger was able to connect to some of her family’s culture that was lost through assimilation, she wrote in the Forward. Though Handwerger supports Israel, she’s afraid to express it to her schoolmates because they regularly post antisemitic statements on Instagram, such as “Dear Jews, it’s time for you to stop crying and blaming the Holocaust for all of your problems.” While she remains silent for fear of being bullied, she encourages other teenagers to be brave in expressing their beliefs. Her advice can apply to adults too.

I’ve called out friends who tweet about every prejudice except antisemitism. I’ve confronted acquaintances who reduce Jews to the simplistic “white people” who have “white privilege,” thereby erasing our centuries of struggle against persecution.

But that’s not enough of a resistance against Jew hatred.

Since I inherited none of my dad’s flair for fighting with my fists, I’m going to be like my grandpa and fight with my pisk. I’m going to learn to speak Yiddish—and then I will speak it loudly and proudly. Join me.

Florina Rodov has written for The Atlantic, Shondaland, Newsweek and others. She was nominated for a Pushcart Prize in nonfiction, receiving a notable mention, and is working on a book.