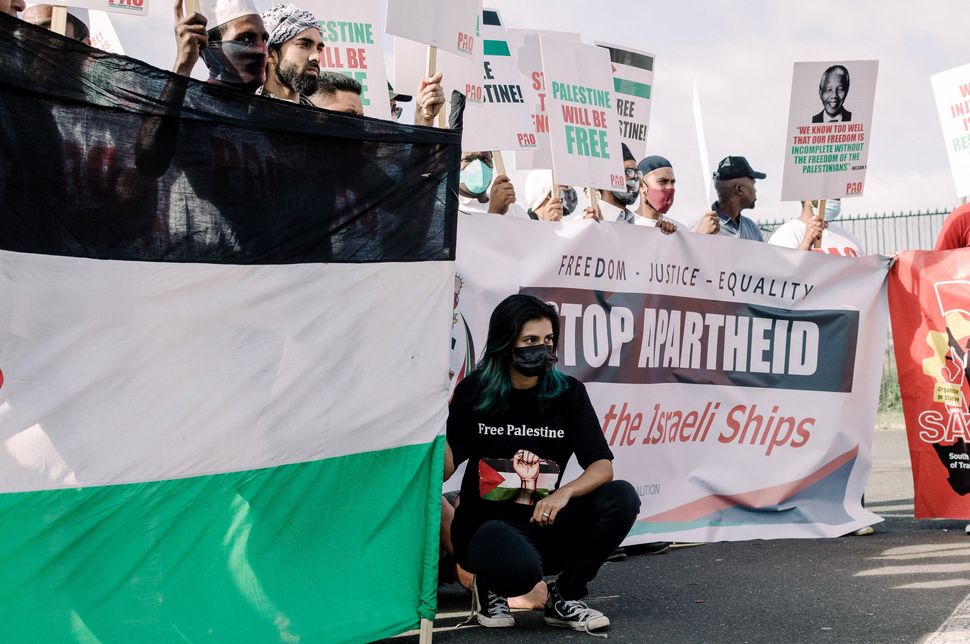 Members of the South Africa Boycott, Divestment and Sanctions (BDS) Coalition, Civil Society groups and several trade unions hold an anti-Israel protest of the docking of an Israeli ship at the Durban Harbour on May 21, 2021. The Zim Shanghai, owned by Israeli state owned company Zim Lines docked at the harbour on May 19, 2021. The dock workers refused to unload goods to or from Israel to pass therough South African ports. The protesters condemned the ongoing Israeli air strikes resulting in the killing of Palestinians in Gaza and the West Bank. By STR/AFP via Getty Images

“They went to a protest against the war in Gaza…Marianne wanted her life to mean something then, she wanted to stop all violence committed by the strong against the weak…and now she knew she wasn’t at all powerful and she would live and die in a world of extreme violence against the innocent.”

This description of the 2014 war, which most readers would barely register but is a very clear red flag for anyone who actually knows what went on at the time — which is to say, a conflict that began because Hamas kidnapped and murdered three Israeli teenagers and shot missiles at Israeli civilian centers — was sandwiched in between a paragraph about how bored Marianne was and a paragraph in which she and Connell, the other main character, tell each other they love each other, but in a bored-seeming way.

The lines about the Jewish state preying on the weak came so out of the blue in a book that had nothing to do with geopolitics — it’s the story of sad-sack rich Marianne and poor but popular Connell, who have a melodramatic yearslong on-and-off relationship — in which the self-described Marxist author seemed to be making the point, as the Beatles and J.Lo have before her, that wealth won’t get you love and happiness. (You may notice that I didn’t really like the book, even without the Israel part.)

It read, I argued to my Tel Aviv book club, like Rooney has an ax to grind against Israel. And lo and behold, it turns out that she does.

Authors are not the same as their characters; if someone writes about a murderer or a racist, there is no reason to assume the author is either.

I don’t know, for example, what comedian Dave Chappelle really thinks about Jews and Israel. The “Space Jews” joke in his latest comedy special on Netflix, “The Closer,” is a case of Holocaust inversion, the claim that Jews in Israel are behaving like Nazis.

As uncomfortable and angry as it made me, it came in the context of a special in which Chappelle, as always, was telling jokes that he knew would offend many groups of people, and in which he was asking viewers to think about why we laugh at some of those jokes and not others. There’s a difference between a character in a book or an onstage persona toying with antisemitism, as ugly as that may get, and their creator actually advocating for it.

But Rooney did the latter this week.

The world learned a few days ago that Rooney decided she would no longer allow her books to be published in Hebrew, the historic language of the Jewish people, the language heard in synagogues and Jewish schools worldwide, by the Israeli publisher who translated her first two books.

Amid accusations that this was not only an antisemitic decision, but a fundamentally anti-art and anti-cultural one, Rooney issued a clarification. The novelist now claims that “it would be an honour” for her works to be translated into Hebrew, but only in a way “that is compliant with the BDS movement’s institutional boycott guidelines.”

Her statement was apparently meant to show she doesn’t want to discriminate against Jews. Instead, she made it clear that the opposite was true, but that she thinks she can argue her way out of being called an antisemite — perhaps unsurprising for the former top debater at the European University Debating Championships. The chances of her latest book, “Beautiful World, Where Are You,” being made available in Hebrew are next to nil — good luck finding a Hebrew-language publisher of fiction that doesn’t sell to the two Israeli bookstore chains that hold the vast majority of the market, or that don’t violate the BDS movement’s standards in myriad ways.

This is a useful reminder that BDS is, at its core, an eliminationist movement. It is not against the so-called “occupation.” It seeks to get rid of the State of Israel and replace it with a Palestinian state between the Jordan River and the Mediterranean Sea. As its founder, Omar Barghouti has said, the movement “oppose[s] a Jewish state in any part of Palestine” and “there won’t be any Zionist state like the one we speak about [presently].”

It should go without saying that there is only one Jewish state, and eliminating it would certainly put a plurality of the world’s Jews in danger. It would arguably put all Jews in danger by bringing us back to the vulnerable situation we were in before 1948, when we did not have a place of our own to flee to from genocide, expulsions, pogroms and farhuds.

In addition, BDS and its supporters have never come up with a convincing argument for why Palestinians deserve self-determination and Jews don’t.

The bottom line is, as Board of Deputies of British Jews Vice President David Mendoza-Wolfson put it, that Rooney “will not allow her latest work to be published in Hebrew, the language of the Jewish people, unless it is permitted by those who advocate for the destruction of the world’s only Jewish state.”

Rooney is no fool; she surely realizes this. All the evidence points to her promoting an antisemitic movement. The onus is still on her to prove otherwise.

Lahav Harkov is Diplomatic Correspondent and Senior Contributing Editor at The Jerusalem Post.