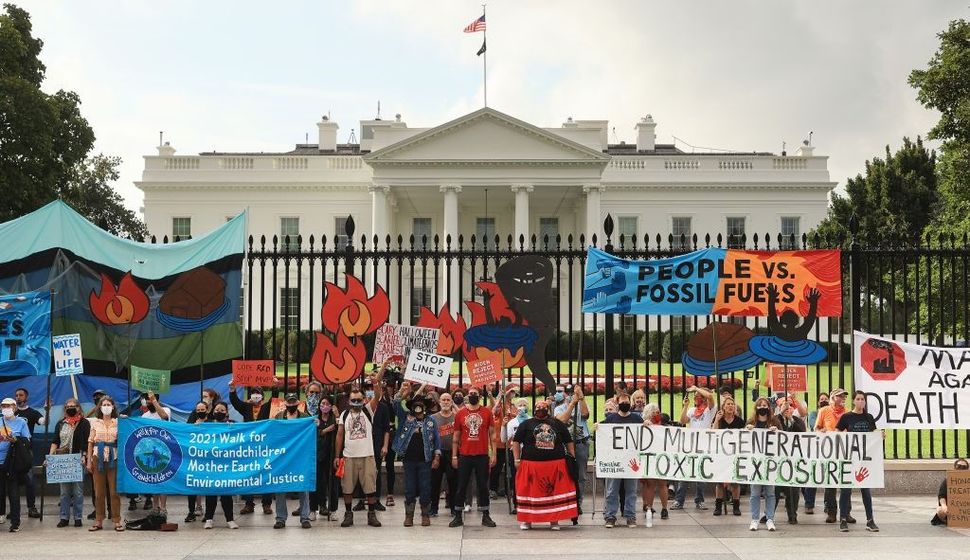 Demonstrators prepare to be arrested during a rally outside the White House as part of the ‘Climate Chaos Is Happening Now’ protest on Oct. 13, 2021 in Washington, D.C. By Chip Somodevilla/Getty Images

“You are not obligated to complete the work, but neither are you free to desist from it.” This quote from Pirkei Avot is recited so often among Jewish activists that it can feel like a cliche. Many of us have heard it in moments of exhaustion, pessimism or despondence.

Last month, Sunrise DC, a local hub of the Sunrise Movement, the national youth-led climate organization, invoked that very text to announce their withdrawal from a rally promoting voting rights and DC statehood because three Jewish organizations that identify as Zionist were also on the program. In their statement calling for the exclusion of these organizations from the rally, Sunrise DC failed to mention their decades of progressive activism.

Following pushback from Jewish and progressive partners, the national Sunrise Movement issued a statement acknowledging that singling out Jewish organizations for widely held views was antisemitic but entirely ignoring the discussion of Zionism. Sunrise DC responded by doubling down and explicitly standing in opposition to Zionism.

We are increasingly concerned about calls for ideological fealty to an anti-Zionist position as a condition for entry into progressive coalitions. It does not have to be this way. Progressive coalitions have long included partners with significant disagreements. The U.S. Conference of Catholic Bishops opposes abortion; we vigorously oppose that position, but we would not let it get in the way of working together to raise the federal minimum wage.

But now in DC, a coalition that unites environmental groups, feminist groups, progressive Jewish groups and many others to fight for voting rights and democracy has suffered a setback. And the consequences won’t fall on the Israeli government or even American Jews but on the DC residents who need all of us in their corner.

Sunrise DC’s response to the criticism revealed that they misunderstood the criticism entirely. Zionism is rooted in the aspiration for a home for the Jewish people. Liberal Zionists believe that it can be realized and sustained only through self-determination for Israelis and Palestinians and a just resolution to the decades-long conflict. Originally a movement that called for the return of an indigenous people to their land and an end to British colonial rule, Zionism aligns with our progressive values. Jews have faced mass murder, genocide, and the threat of extinction – not just in the Holocaust but also repeatedly over centuries leading up to it. Their ancestral homeland is a safe haven, a place Jews have lived uninterrupted over centuries.

Sunrise DC sees it very differently. Their second statement cited as evidence the recent decision by the Israeli government to designate six Palestinian groups as terrorist organizations, further proof in their mind that Zionism is irredeemable. But decisions by today’s Israeli government, even if they turn out to be grievous mistakes, do not mean that Zionism is inherently and fatally flawed.

No decision by the contemporary Israeli government undermines the Jewish people’s right to a homeland. That’s why as American Jewish leaders, we’ve spent years working hand-in-hand with a wide range of partners to deliver on the still-unrealized promises of democracy and justice enshrined in our founding documents.

Our commitment to a Jewish state in our ancestral homeland doesn’t invalidate our years of fighting for justice, and it won’t stop us from continuing to fight. Sunrise DC can borrow from Pirkei Avot and Jewish tradition, but we will do the same: we will not desist from our work, and we invite anyone genuinely committed to that work to join us.

Jessica Haller is a member of New York Jewish Agenda’s Leaders Network, a Climate Leader with the Climate Reality Project, and a former candidate for City Council.