Toronto students walked out in support of Palestinian rights. The reality is more complex 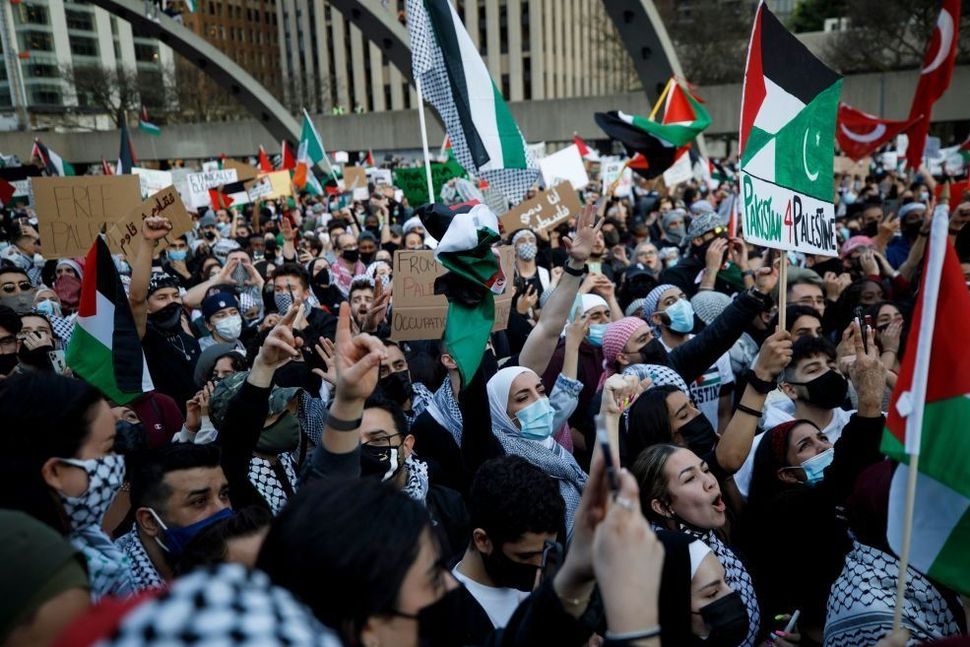 People wave flags and chant during a demonstration to voice support for the people of Palestine, at Toronto City Hall in Toronto, Ontario, Canada, on May 15, 2021. By Cole Burston/AFP via Getty Images

On Friday, Nov. 12, 2021, some two hundred students at Marc Garneau Collegiate staged a walkout in support of Palestinian rights to show their solidarity with Desmond Cole, a Toronto anti-racism educator, and Javier Davila, a teacher in the Toronto District School Board (TDSB).

Earlier this year, Davila was suspended (and then reinstated without discipline) for circulating a dossier to his colleagues on the Israeli-Palestinian conflict that included links to the official website of the Popular Front for the Liberation of Palestine (PFLP) — a recognized terror entity in Canada and the U.S. These materials were obviously very hostile toward Israel, which prompted a backlash from Jewish groups.

During an anti-racism session he conducted for the TDSB, Cole addressed the incident and strongly endorsed Davila, denouncing any suggestion that he harbored antisemitic views. In a subsequent blog post Cole wrote that — you guessed it — it’s not antisemitic to support Palestinian rights.

As the executive director of Hasbara Fellowships Canada, an organization that trains students to combat antisemitism and anti-Israel hatred on college and university campuses, I agree with Cole. It’s not antisemitic to acknowledge that many Palestinians, especially in Gaza, are living in dire conditions. And it’s not antisemitic to recognize that the security barriers between Israel, the West Bank, and Gaza — while necessary — create obstacles for many Palestinians who enter Israel to make an honest living and put food on their table.

In my opinion, it is antisemitic, however, to knowingly support or publicize the efforts of groups or individuals that seek to rid the world of its Jewish population. The PFLP, for example, is an organization that has gleefully claimed responsibility for several attacks on Jewish lives.

The problem in our hashtag-obsessed society is that social media has eroded the nuances that typically permeate everyday life. This has led to an oversimplification of the Arab-Israeli conflict so that there are only two camps — one that is “pro-Palestine” and one that is “pro-Israel.”

In reality, these labels are absurd, as there are many relevant players in this conflict, like Iran and its terrorist proxies, such as Hezbollah and Hamas. There are also millions who support Israelis and Palestinians, including students aligned with my organization who continue to take part in a campaign that calls for peace and prosperity for both peoples.

However, both Cole and Davila have fallen for the trap set by the proprietors of the anti-Israel movement. They look at this conflict as a zero-sum game. It’s not.

The reason Jewish and human rights organizations sounded the alarm about Davila is not because he spoke out about Palestinian rights, but because he did it at the expense of Jews and Israelis. Davila’s dossier didn’t just include links to the PFLP, but also materials that justify suicide bombings.

There is no justification for circulating content that glorifies terrorism or violence. Doing so only harms prospects for peace between Israelis and Palestinians.

When Jewish community organizations (mine included) spoke out against his dossier, we weren’t concerned because Davila supports Palestinians. We were concerned because we’re intrinsically aware of the deeply antisemitic (and genocidal) motivations behind groups such as the PFLP.

In my opinion, it doesn’t appear that Davila and Cole are interested in the concerns of the Jewish community, Canada’s most targeted group for religiously motivated hate crimes. Cole, for one, continues to share falsehoods about Jewish history, claiming on Toronto radio that Israel’s so-called “illegal occupation” is because Palestinians “are darker skinned” than Israelis. He also accused Israel of being a “settler colonial regime in another part of the world where you can occupy other people’s land.”

When academics take part in such revisionism, Jewish students in the classroom recognize that their history is being erased. When such educators advance blatant lies about the Jewish experience, it encourages their pupils to accuse Jews of land theft and colonialism for doing little more than expressing their Jewish identity.

Just as Holocaust denial portrays the attempted extermination of Jews in Europe 80 years ago as a fiction concocted by Jews for their own benefit, the denial of Jewish history in their homeland is no different. It attempts to rob the Jewish people of their own identity so they can be portrayed as a colonialist enterprise worthy of disdain.

In my view, when educators embrace this skewed narrative, they perpetuate the falsehood that one must attack the collective Jewish identity in order to support Palestinians.

Cole himself refused to acknowledge this reality when swarms of his supporters disagreed with his notion that the slogan “Free Palestine” does not imply the destruction of Israel. “Free Palestine isn’t a metaphor,” was one response. “The literal death of the settler-colonial regime — and yes, armed resistance — is required for a free Palestine.”

If Israelis and Palestinians will ever achieve anything resembling peace, the anti-Israel lies simply must end, and the two peoples have to be brought closer together. After all, neither of them are disappearing. Recognizing this reality is the first real step forward toward progress.

Daniel Koren is the Executive Director of Hasbara Fellowships Canada.

Toronto students walked out in support of Palestinian rights. The reality is more complex