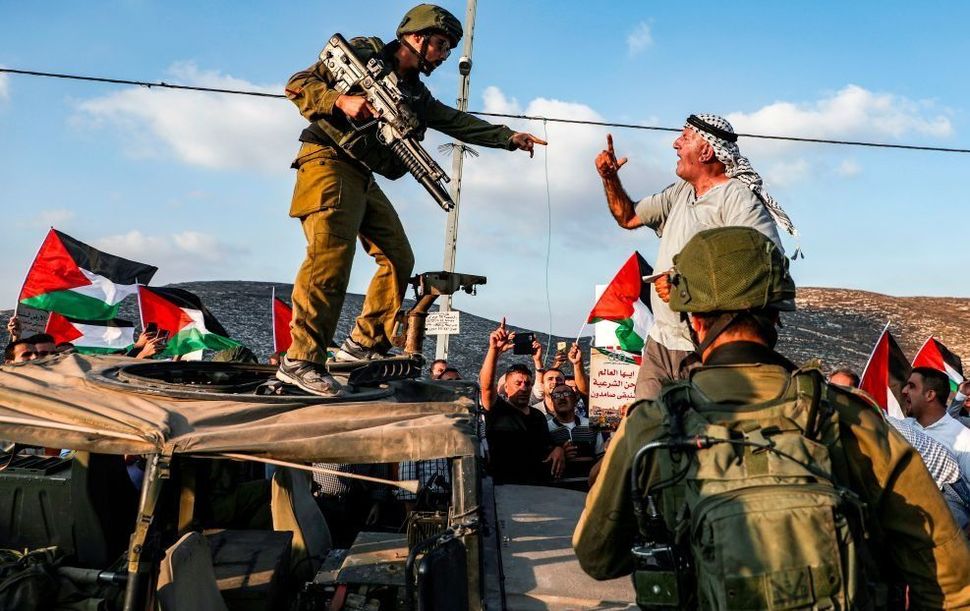 A Palestinian protester yells at an Israeli soldier as he confronts him atop an Israeli army vehicle during a protest against Israeli forces conducting an exercise in a residential area near the Palestinian village of Naqura, northwest of Nablus in the occupied West Bank, on September 4, 2019. By Jaafar Ashtiyeh/AFP via Getty Images

A few weeks ago the police abruptly came to my house in Jerusalem on two different occasions. The first visit they paid was at 3:30 in the morning; six officers came and banged on the doors and windows until my four roommates and I woke up.

My roommates and I were suspected of having drawn graffiti earlier that night in central Jerusalem. The graffiti in question was a part of a wider campaign to raise awareness about Masafer Yatta, an area in the South Hebron Hills that Israel declared a military training area (Firing Zone 918) in the early 1980s. In March, the Israeli Supreme Court will decide whether the Israeli army can expel the 12 Palestinian villages and hundreds of residents that live there.

The typical penalty for drawing graffiti is a fine of a few hundred shekels, but evidently, a small public display of Israeli Jews standing up for Palestinians was so threatening to the Israeli authorities that a more extreme response was needed. (I was home and asleep on the night in question, and neither my roommates nor I are present in the video evidence that I was shown by police.)

The police interrogated us, attempting to incriminate us and anyone else we could name, took our photos and then left. They paid a second visit a few days later: eight detectives arrived in the afternoon with a warrant to search our whole house. After finding no evidence of the crime in our home, one of my roommates and I were summoned to further interrogations at the Russian Compound police station in Jerusalem.

After about 45 minutes of interrogation, I was told I would be allowed to leave if I signed draconian “conditions of release,” which function essentially like bail. These conditions included a monthlong ban from Jerusalem — the city where I live and work. When I refused to sign, I was arrested and told I would be held until my court hearing the following morning. Ultimately, after six hours in a holding cell, they decided to drop the conditions and released me.

This same system that so easily targeted my roommates and me with an absurd and disproportionate show of force stands by and supports routine settler attacks on Palestinians, army violence and land takeover.

In the South Hebron Hills, I’ve seen this hypocrisy clearly when the army fires tear gas and stun grenades at Palestinians while masked settlers ransack their villages. When armed settlers intimidate Palestinian communities in the middle of the night, the army simply leaves. When “incidents” between settlers and Palestinians take place, the police and army arrest Palestinians, ignore the complaints they file and let the settlers go home freely.

The police behavior a few weeks ago was clearly meant to intimidate, instill fear and shut down any desire I have to continue my activism with Palestinians. The police coming to my home was frightening, and a shocking invasion of my private space. The interrogation and time spent in jail were infuriating. I knew that I was innocent, that the evidence the police showed us had nothing to do with me. And yet they could still make up charges, demand absurd conditions of release and lock me in a cell.

Because of my Israeli Jewish identity, I have immense privileges and protections afforded to me by the state, legal and otherwise. I have a right to and am given due process. I can’t be held in administrative detention indefinitely, and, as a Jewish citizen, any mistreatment will be more likely to garner public attention and pressure. The vulnerability and lack of control I felt are infinitely more severe for millions of Palestinians who are living under occupation every day. Random arrests and house raids, long arrests without evidence, huge fines and costs for recouping confiscated materials happen to Palestinians all of the time.

Over the past year, I have seen and been a part of an inspiring growth in Jewish-Palestinian solidarity in support of Masafer Yatta. Where previously international volunteers supported the villages in the South Hebron Hills, the travel closures from the pandemic have inadvertently nurtured local relationships, as Israelis have taken the place of volunteers documenting settler violence and escorting children to school. While the Israeli state works to keep Jews and Palestinians separate, we commit ourselves together to building a better and shared future.

There has predictably been a crackdown on the Jewish activists who have dared to stand with Palestinians and build these connections. In Jerusalem, Jewish-Israeli activists were detained in the night after putting up posters about what is happening in Masafer Yatta. The same day I was arrested, three additional Jewish-Israeli activists were also arrested and two more detained after an altercation between a settler and a Palestinian near a-Tuwani, a village in the South Hebron Hills. The home where the activists had been staying in a-Tuwani was raided by Israeli police and military, who confiscated laptops, cameras, and cellphones belonging to the home’s resident, in addition to a Jeep that belonged to the activists.

The intensity of these efforts to shut down our solidarity demonstrates just how potent it is. Now, when Israeli authorities are ramping up their efforts to suppress cooperation between us, is the time to deepen our connections, renew our efforts and take stronger stands against the system of occupation Palestinians live under every day.

We are attacked because we are feared, because we have a fighting chance of stopping the onslaught of violence, suppression and expulsion being carried out by Israel every day. Now is not the time to let up.

Oriel Eisner is an Israeli-American activist and organizer living in Jerusalem. He is an on-the-ground organizer with the Center for Jewish Nonviolence and for the last seven years has been involved in anti-occupation activism and solidarity work in Israel-Palestine, primarily in the South Hebron Hills of the West Bank.