Babyn Yar is a site of Jewish death. Its memorial is a testament to a democratic Ukraine 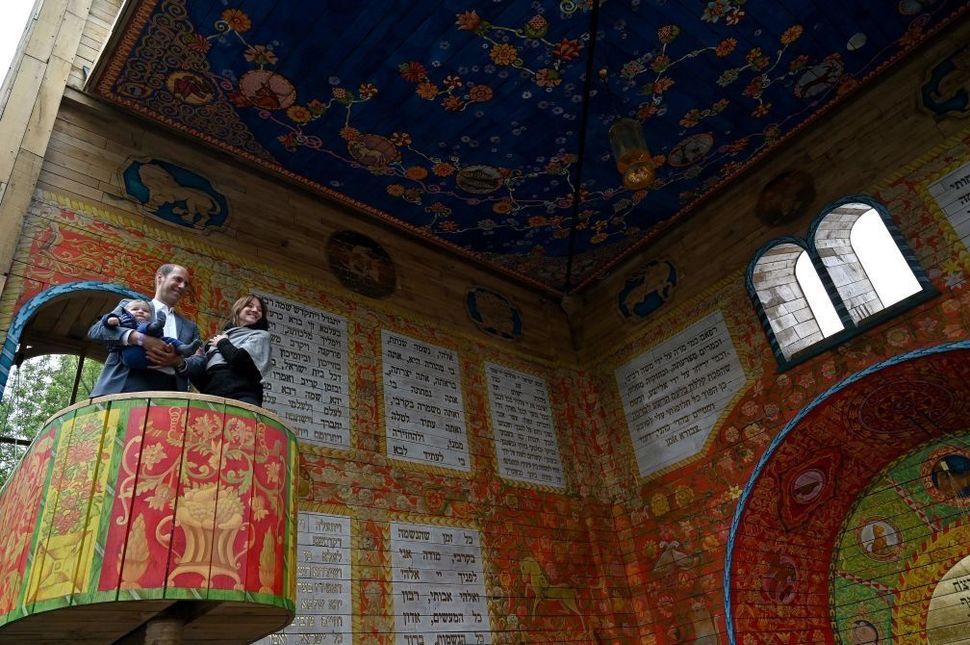 Architect Manuel Herz with his wife and baby take part in the opening ceremony of a symbolic synagogue at Babi Yar (Babyn Yar), a place in Kiev where the Nazis shot more than 100,000 Jews between 1941 and 1944, on May 14, 2021. By Sergei Supinsky/AFP via Getty Images

“My sister, brothers, mother and father are all buried in Babi Yar,” Fania Khasidovich told me when I visited her in 2008 in Fastiv, a city of 40,000 people about 50 miles southwest of Kyiv. It was only a few days before her 92nd birthday. “I was with them,” she continued, “I lived through it, and they perished.”

But Fania wasn’t talking about the mass grave in Kyiv that was recently hit by shrapnel from a Russian missile targeting a nearby television antenna. “Here in Fastiv, there is a Babi Yar,” she told us. Every city, every town in Ukraine, has its own little Babi Yar.

Between 1941 and 1943 about 1.5 million Jews were murdered by the Germans with Ukrainian collaboration. Many are buried in unmarked mass graves in ravines and forests across Ukraine. The organization Yahad in Unum, established in 2004 by Father Patrick Desbois, has documented 1,911 Holocaust-era execution sites throughout the former Soviet Union.

A country with so many mass graves can get overwhelmed by the presence of ghosts and dybbuks. As Ukraine once again comes under attack, it is important to remember the blood of our ancestors that has been shed in this land. But it is also important to celebrate the new life that has been struggling to build a free, pluralistic and democratic state, and that is currently holding firm against Russian aggression.

Ukraine is full of ravines, forests and fields in which mass murders once took place. Many have since become places of leisure for a new generation struggling to rebuild and to live again. I have seen firsthand through my own work studying these sites that they are not just memorials to the dead but also places of life.

As a member of a research team that collected oral histories of Yiddish-speakers in Ukraine, I have visited dozens of mass graves and memorials, usually accompanied by survivors who shared with us their stories. Under the direction of the Yiddish linguist Dov-Ber Kerler, our team, called the Archives of Historical and Ethnographic Yiddish Memories (AHEYM), interviewed nearly 400 people, mostly in Ukraine, but also in Hungary, Romania, Moldova, and Poland between 2002 and 2010.

In Slavuta, Ukraine, Maria Liberzon showed us where the town had planted an orchard of trees so that nobody would build over the site of the mass grave. About 1,500 Jews had been shot when the Germans occupied the town in August 1941. At a time when the Soviet government sought to de-emphasize the Holocaust, she explained, it was too dangerous to mark the site with a monument, so the surviving Jewish community instead persuaded the local authorities to plant the orchard as a silent marker. When we visited in May 2003, two young men were kicking around a ball amid the trees, using the orchard as a place of leisure.

In a small village, we visited the site of the Pechera Concentration Camp that the Romanians, who ruled the region south of the Southern Bug River, had established on the grounds of a former noble estate during World War II. Over 10 thousand Jews died in the camp, mostly from starvation or disease. Sasha Kolodenker and Rita Shveibish told us of how they had survived by chewing on beetroot.

The camp was scenically situated on a hill overlooking the Southern Bug. A path led down from the camp to the river, from which the starving and thirsty inmates could attempt to fish or quench their thirst at their peril, for the Germans waited on the opposite bank shooting at those who came within their sight. When we went down to the river, we passed a small group of day hikers bathing in the water. We asked Sasha how he felt seeing people swimming and frolicking in the river. He smiled and shrugged his shoulders, “Please, let them!”

I was reminded of our visit to the building that once housed the Great Synagogue of Rivne before the Soviet government closed it in 1955. Rivne, a city in Western Ukraine, had been the home of an organized Jewish community since the mid-sixteenth century. The Great Synagogue’s building had since been turned into a gymnasium, and Moisei Fish showed us where on the gym mat the bimah had once stood and reminisced about the great cantors who had performed there. But Fish was not disturbed by the desecration of the synagogue — the young people, after all, need a place to work out.

This acceptance of both the tragic memory and present joy was apparent when I last visited Kyiv’s Babyn Yar in July 2019. It was a beautiful warm day and the complex was crowded with picnickers, walkers and a group playing soccer. My first reaction was revulsion that people would be so callously disregarding the sacredness of the site. But after a few hours of wandering through the ravines and memorials, I too, took out the lunch I had packed and sat down in the grass to eat it.

Not everyone, I realized, wants to confront the thorny questions of the past — how to remember Ukrainian nationalists who collaborated with the Nazis, or how to memorialize the Holocaust in a respectful manner. Even those committed to that memory sometimes need a break. Occasionally, it’s OK to just enjoy a hike in a ravine or meet up with friends at the monument that marks the center square.

Ukrainians are once again being murdered and their cities bombed, now by Russian tanks and rockets. In time, monuments will surely be erected to commemorate this war as well. I hope that amid the destruction and memorialization, there will also be a place to kick around a soccer ball and enjoy a picnic. A free and democratic country needs both.

Jeffrey Veidlinger is the Joseph Brodsky Collegiate Professor of History and Judaic Studies at the University of Michigan and the author most recently of In the Midst of Civilized Europe: The Pogroms of 1918-1921 and the Onset of the Holocaust.

Babyn Yar is a site of Jewish death. Its memorial is a testament to a democratic Ukraine