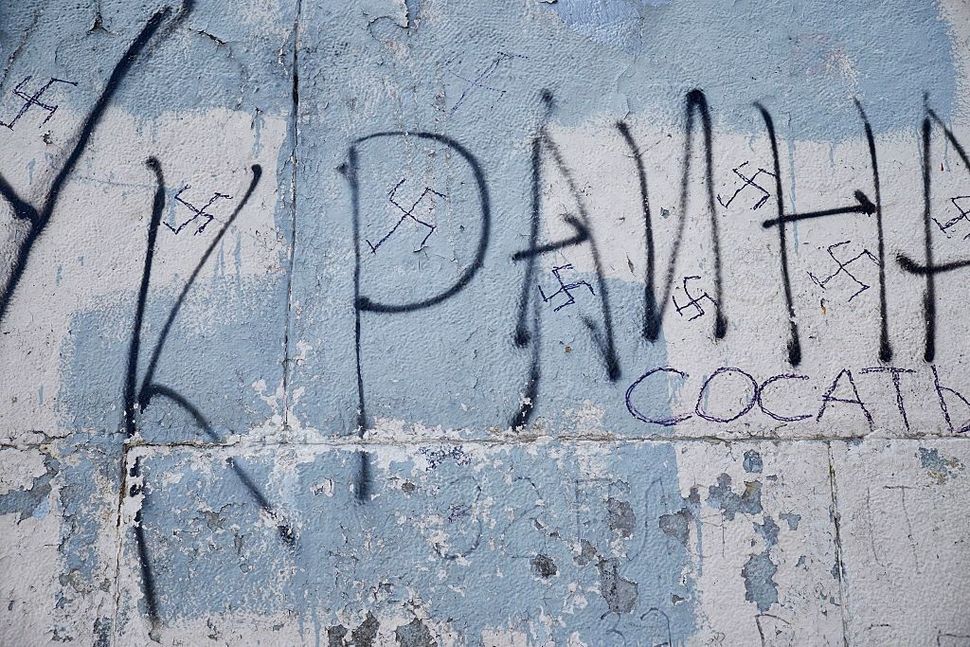 Swastikas drawn on the statue of Lenin in Odessa, Ukraine on April 23, 2015. (Photo by Pierre Crom/Getty Images) Image by Getty Images

You recently tweeted about an article I wrote in these pages. The article was about anti-Semitism and anti-Roma pogroms in Ukraine. You were skeptical:

Be interested to know if this is based on Russian disinformation. https://t.co/h2uKTYYKeR

I’m glad you’re exhibiting a healthy skepticism. The next logical step would’ve been to look at the article, which contains 58 links to stories by established Western media, including Reuters, the New York Times, and U.S.-funded Radio Free Europe; statements from Amnesty International and the Anti-Defamation League; a video from the World Jewish Congress; a report from the Israeli government; and a press release from the president of Ukraine acknowledging the existence of anti-Semitism in his own country.

If you did examine those links and still thought my piece was based on Russian disinformation, I’m afraid there’s nothing I can do here. All I can say is you’ve gone down a road I cannot follow, and I hope you’ll find your way back.

But it seems to me the more likely explanation is that you did not examine the supporting links, and instead issued a baseless accusation along the lines of “Be interested to know if Howard Dean has sex with stuffed animals” — a smear couched in the form of inquisitive musing (you did something similar in a tweet about The Intercept last year). And that’s a bit of a problem.

Would be interesting to find out if the intercept gets money from Russia or Iran https://t.co/A6ym7Qkx6y

First, my article wasn’t published by Sputnik; it was published by the Forward. By implying that the piece was based on “Russian disinformation,” you cast aspersions on an established, prize-winning Western media outlet whose publication process includes editing and fact-checking. Additionally, if you took two seconds to Google me, you’d know I came to America as a child refugee from the Soviet Union, which makes me a rather unlikely guy to sympathize with the Kremlin.

I bring this up because you know who else maligns Western media as spreading “fake news”? Donald Trump. Trump also has a habit of accusing people like Syrian and Salvadoran asylum seekers of being in league with the very forces they’ve fled from. So while you spent the past two years publicly bemoaning Trump’s assault on immigrants and the media, you’re kind of emulating him right now. You might want to stop that.

Second, I’m going to guess the reason you went after my article is because it exposed an aspect of Kiev that is, um, inconvenient to American foreign policy. I get it. It’d be a lot easier if stories being published on Ukraine focused solely on things like puppies and rainbows, not pogroms and neo-Nazis. Except — irony alert! — you know who does that? The Kremlin.

In other words, you’re engaging in the exact same tactics as those you’re accusing me and the Forward of. You might want to stop that as well.

Lastly, we come to why this is important. I like puppies and rainbows as much as everyone else; the reason I choose not to ignore neo-Nazis, however, is because, well, they’re neo-Nazis, and ignoring neo-Nazis doesn’t work.

I feel confident making this assertion because I’m one of the first people to cover the dark side of post-Maidan Ukraine in American media, in the Boston Globe and the New York Times in 2014. (Before you ask, allow me to assure you those articles were edited and fact-checked as well). Since then, the problem in Ukraine has only grown.

Most concerning, however, are the Roma pogroms. Last week, Ukraine had its sixth pogrom in two months. This time, they killed a man and stabbed a child.

Have you seen the videos? They’re blood-chilling.

I know what it’s like to run down Ukrainian streets chased by men screaming for the vermin to leave their country, so I guess I have a soft spot for the Roma predicament. And considering the U.S. is funding the Kiev government — which is allowing this to happen — I’d rather speak out than be silent and complicit.

Of course, Russian propaganda, of the both the English and Russian language varieties, gleefully covers the pogroms, just as it covers anything negative about Ukraine and the West. But if we make “Did Russia cover this?” a litmus test for what’s allowed to be discussed in American media, we’ll need to avoid things like police shootings, the Flint water crisis, pretty much every issue you addressed during your presidential campaign, or, indeed, anything bad. And since news is mostly focused on bad things, that leaves us with puppies and rainbows 24/7.

I’ve lived in a country of puppies and rainbows once, and seen how it withers society; its effects plague post-Soviet states to this day. I have no wish for this to happen in America. And I don’t think you, or at least the version of you that once ran for president, would want that either.