No, ‘Protest Tourism’ Is Not A Thing 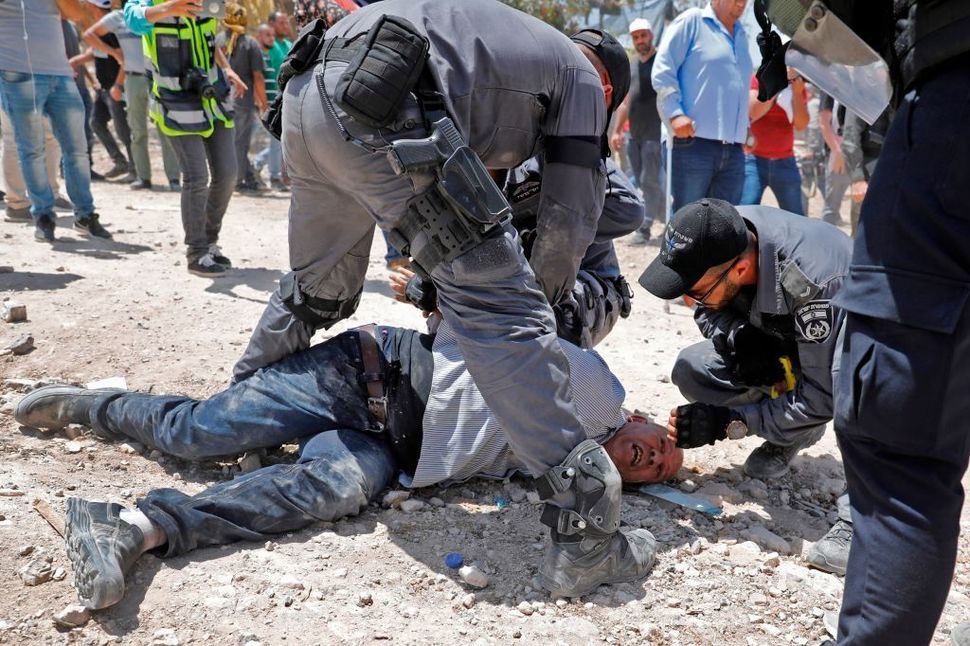 Israeli security forces arrest a demonstrator protesting against demolitions in the Palestinian Bedouin village of Khan al-Ahmar, east of Jerusalem in the occupied West Bank on July 4, 2018. (Photo by AHMAD GHARABLI/AFP/Getty Images) Image by Getty Images

As a young-ish British Jewish anti-occupation activist, I’m sadly all too familiar with straw-man attacks. I and others like me are so viciously attacked online following any meagre expression of opinion that if you were to believe even just half of the things written about us on the internet, you may be excused for thinking that most of us are card-carrying cheerleaders for terrorists that respond only with celebration toward news that an Israeli Jew has been killed in an attack.

Such attacks rely on our Jewish identities and connections having already been so belittled that the reader would have to wonder what business we have at all in involving ourselves in Jewish communal life.

Recently, though, I encountered a new kind of attack in Seth J. Frantzman’s recent article in these pages. There he argues that those of us coming from Jewish diaspora communities to take part in activism in Israel and the Occupied Palestinian Territories are engaging in a crude form of “protest tourism.”

“There’s a kind of protest tourism that goes on in this part of the world,” writes Franzman. “It comes with its own fashion accessories, most frequently a culturally appropriated Palestinian khaffiya, and it’s not inconsistent with enjoying the fruits Israel has on offer in other, less contentious corners.”

He couldn’t be more wrong.

Though I’ve since returned to London, where I’ve begun organizing with the new British-Jewish anti-occupation group “Na’amod,” I was recently immersed in the diaspora activist world that Frantzman describes with in his article.

With the All That’s Left Collective, the Centre for Jewish Nonviolence and Achvat Amim/Solidarity of Nations, my voluntary work involved a diverse number of projects. We helped with English-language instruction at the Yad B’Yad binational school, organizing and translating information on housing demolitions in East Jerusalem with the human rights organization Ir Amim, providing support to the Jahalin Bedouin community in Khan al-Ahmar and elsewhere with Rabbis for Human Rights, as well as providing a sadly much-needed solidarity presence in villages in the South Hebron Hills and the Jordan Valley.

As you may have noticed from this list, very little of the work actually involved anything that could be called “protesting.”

While carrying out this work, I lived in West Jerusalem — like Franzman’s “protest tourist”. But the reasons for this are rather simple: a wish to not contribute toward gentrification in parts of East Jerusalem taken over by NGO workers, and also a desire to explore my own complicated links to Israeli society. Though I was born in London, my family has a long history in the area that would later become Israel. Among my ancestors are some of the founding members of the city of Petah Tikvah, to state just one example.

Sure, I may have occasionally indulged in an ice-coffee from Aroma or sabich from Bein Aza Le’Berlin while wearing one of my t-shirts sporting left-wing slogans (I’m sure Frantzman would be happy to know that the All That’s Left shirts do in fact read “end the occupation” in English, Hebrew and Arabic). But I disagree that this fact should bar me from being able to work against the occupation.

The occupation, like other social ills, will be ended through wide-scale structural change, not individual lifestyle choices.

I concede that Frantzman does indeed make a very valid point regarding the inequality prevalent in international study-abroad programs. We should always challenge such inequality wherever it may be found, which is I why I hope he will be pleased to learn about the work the organizations I worked with have done to secure grants to provide for their volunteers and make sure that people who don’t usually have access to such programs can be better prioritized.

When his attack is applied to another area, Frantzman is actually entirely correct. Privileged and entitled diaspora Jews certainly are traveling to Israel and the Occupied Territories for all the wrong reasons. Which is why I hope he’ll join me in bringing attention to the institutions — including universities and yeshivot that bring thousands of Jews from North America and elsewhere to help support the settlement enterprise in the West Bank — further contributing to the dispossession of the Palestinian people.

As long as many of my fellow diaspora Jews are travelling to Israel-Palestine to support the settlement enterprise, I and others like me will certainly continue to do the same in order to oppose it.

Rob is a British Jewish anti-occupation activist from London and recent M.A. graduate from the Hebrew University in Jerusalem.

No, ‘Protest Tourism’ Is Not A Thing