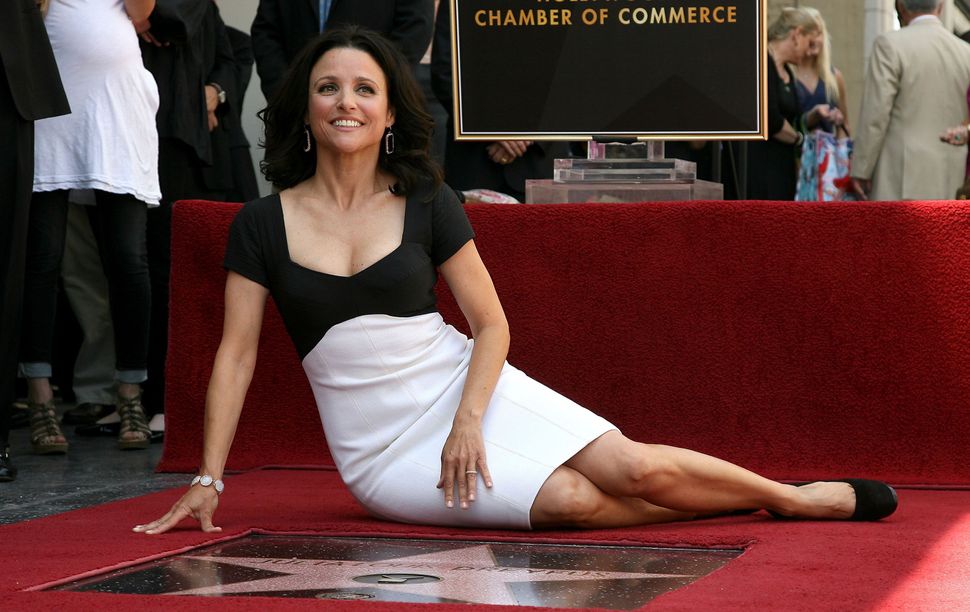 “Maybe they were preparing George Lopez’s upcoming star and subconsciously [added] a Hispanic bent when they etched ‘Luis,’” wrote Carol Leifer, co-producer and co-writer of “Seinfeld,” in an e-mail to the Forward.

Within hours of being notified of the error, according to the Huffington Post, the Hollywood Chamber of Commerce — the awarding organization behind the Walk of Fame — had chiseled out the offending letters and replaced them with the properly engraved “Louis.”

Louis-Dreyfus is in good company, though. The only other typo in Walk of Fame history befell comedy legend Dick Van Dyke, according to Chamber spokesperson Ana Martinez-Holler. On February 25, 1992, when Van Dyke’s star was about to get unveiled, the actor noticed that “Van” and Dyke” weren’t separated. “Mr. Van Dyke, being the smart guy he is, pulled out a magic marker and drew a line between ’Van’ and ‘Dyke’. That was the photo shown around the world,” Martinez-Holler told the Forward.

For her part, Louis-Dreyfus found the error “hilarious”, Martinez-Holler said. “She wanted us to keep it that way.” Instead, the actress will get to keep the typographically challenged chunk of polished marble as a souvenir — along with an apology card from the guilty craftsman.

Considering she’d spent the past 48 hours answering questions about l’affaire “Luis-Dreyfus,” Martinez-Holler was taking it in stride. “I couldn’t be mad at the guy who made the typo,” she said. “It was an accident. He was mortified.”

However, as of today, the terrazzo-star maker is going to text her a photo of every nameplate before it’s placed on the Walk of Fame.