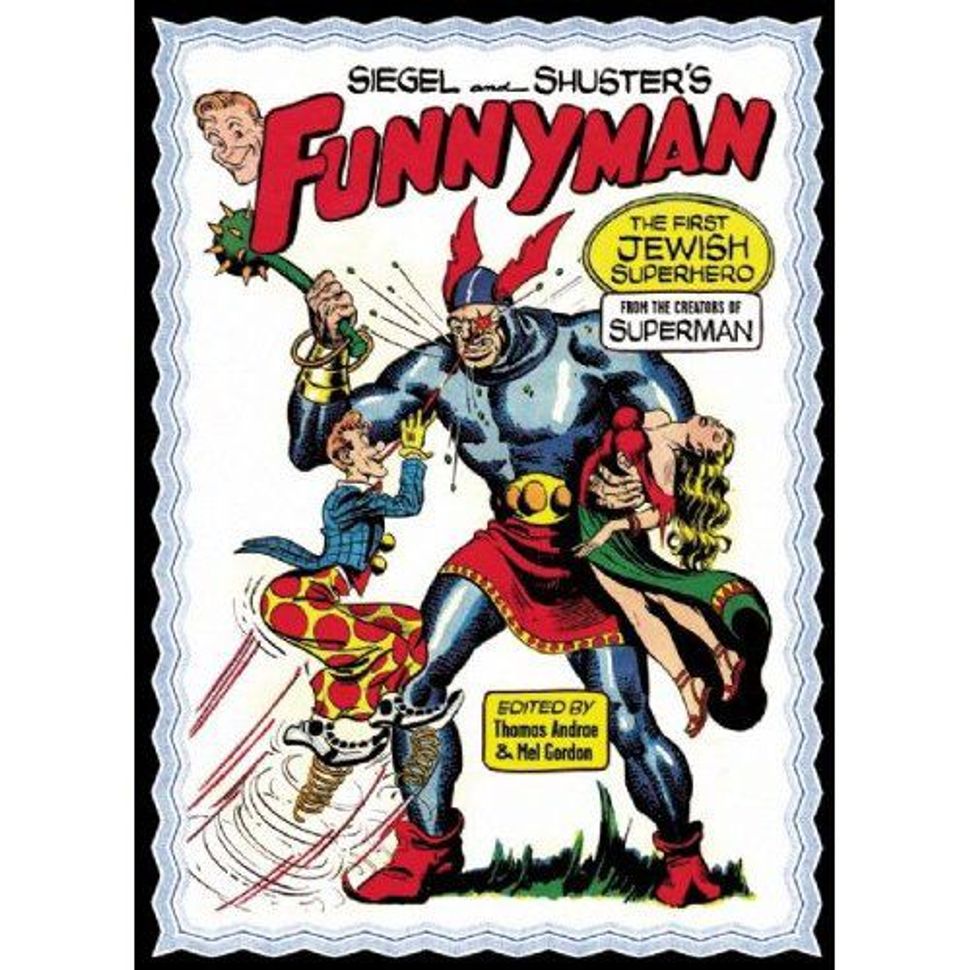 In 1947, nearly a decade after Jerry Siegel and Joe Shuster sold the rights to Superman — an infamously raw deal that earned the comic’s creators a paltry $130 — the duo attempted to avenge their exclusion from the franchise’s lucrative rise to the top of the comic book heap. But their new effort, Funnyman, a bizarre fusion of the archetypal American superhero and Jewish vaudevillian humorist, tanked after six issues and spelled the end of Siegel and Shuster’s partnership.

A new book to be released in July, titled “Siegel and Shuster’s Funnyman: The First Jewish Superhero,” by pop culture historian Thomas Andrae and Mel Gordon, a professor of Theater Arts at the University of California, Berkeley, details the genesis, influences and demise of Funnyman.

The book, luminously printed by Feral House, reprints the original six-issue color series, which debuted in January 1948 and began appearing in newspapers later that year.

In three deeply analytical historical essays, Andrae and Gordon contextualize Funnyman — undoubtedly timed to coincide with the newly founded State of Israel — within imaginings of Jewish masculinity and the larger cultural trend of Semitic superheros, like Paul Wegener’s “The Golem” and real-life strongmen such as the early-twentieth century Polish performer Siegmund Breitbart.

Funnyman, a sort of antithesis to the hyper-masculine Superman, juxtaposes the fantastical identity construction that Superman embodied (a strong, successful, assimilationist immigrant), while still finding himself in Superman-like save-the-day situations.

Funnyman’s use of Yiddishisms, his clownish appearance (the entertainer Danny Kaye was a major inspiration) and his knack for defeating villains with braininess and not brawn closely illustrates the Jewish stereotypes of the period and foreshadows the pop culture Jewish sensibility of the second half of the twentieth century.

With their publication, Andrae and Gordon have made quite an achievement by bringing the long-forgotten Funnyman back into the fold, not just as an emblem (however unfortunate) of twentieth century Jewish identity, but as a vital piece of American Jewish history.