For Malian Musicians, ‘Simplicity is Freedom’ 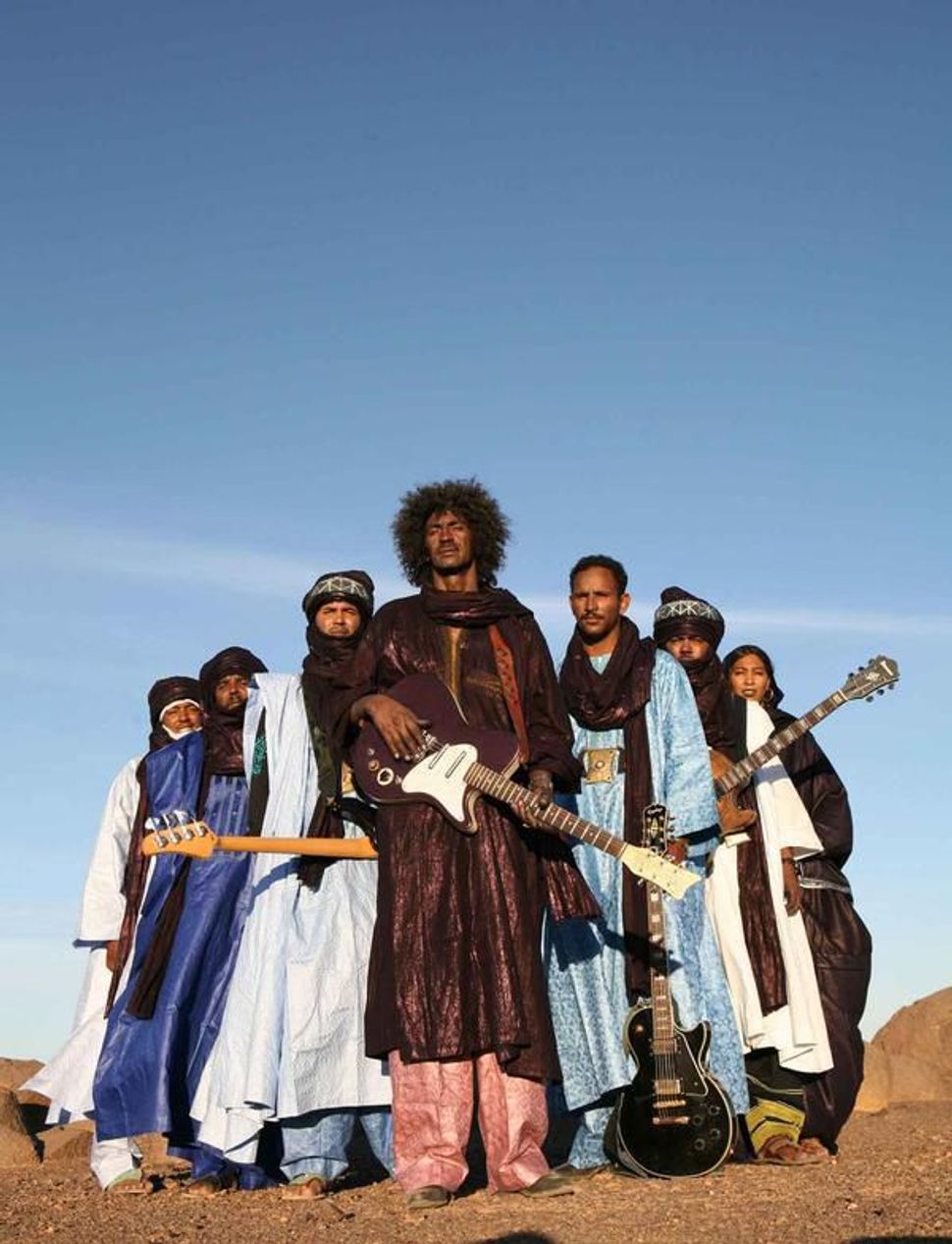 Which is why it was so refreshing to hear the West African rock collective Tinariwen perform at Brooklyn’s Bell House last Sunday, coming off of a show on Saturday at Central Park’s Summerstage and following an opening performance by the neo-cantorial band The Sway Machinery (with whom they joined forces earlier this year in Mali).

Apparently uninterested in showing off a catalog of musical forms, Tinariwen filled their set with unpretentious one-chord trances. Not surprisingly, their motto, proudly displayed on their merchandise, reads “Simplicity is Freedom.”

The group hails from Mali, its members being of Tuareg descent — a cluster of nomadic tribes scattered throughout the Saharan region who have fought a decades-long separatist struggle in post-colonial French Africa. Tinariwen’s music is certainly political; several of the members, including their front man and lead guitarist, Ibrahim Ag Alhabib, are former soldiers. Their lyrics, which are hauntingly sung in their native tongue, often in a call-and-response manner between Ag Alhabib and the rest of the band, deal with themes of exile and liberation.

Still, I doubted the presence of many fluent Berber speakers at the show, so I assumed that the audience, myself included, was moved by the group’s collaborative musical efforts rather than by the eloquence of their social message.

Serious guitarists will be particularly impressed by Ag Alhabib’s technique. Unlike blues and rock shredders like Jeff Beck or Eddie Van Halen, whose prowess can be seen in the way they bend strings or play fast ascending and descending melodic runs, Ag Alhabib gently hammers on individual open strings on his single coil Fender guitar, and leaves plenty of room in between bars to let the notes ring. A student of the “less is more” school, he displays his genius by taking his time. (The opener, guitarist and Forward contributor Jeremiah Lockwood, seemed to pay tribute to Tinariwen by arthymically noodling in this restrained style on his reverb-drenched Telecaster between songs.)

Tinariwen’s rhythm guitarist, on the other hand, dutifully strums one single chord for the duration of an entire song, reminiscent, in a way, of the guitar style employed by Fela Kuti’s Afrobeat band, albeit in a much less frenetic fashion.

The experience of hearing Tinariwen reminded me of how, in 1965, the American folk community cynically shunned Bob Dylan for daring to “go electric” and, in their view, minimizing the seriousness of the folk genre. Such a debate, I imagine, would seem foreign to a band as sincere as Tinariwen, who perform with several electric guitars along with African percussion instruments, wrapped in traditional Saharan garb, and without the slightest hint of irony.

Watch an Al Jazeera documentary about Tinariwen, ‘Music of Resistance’:

For Malian Musicians, ‘Simplicity is Freedom’