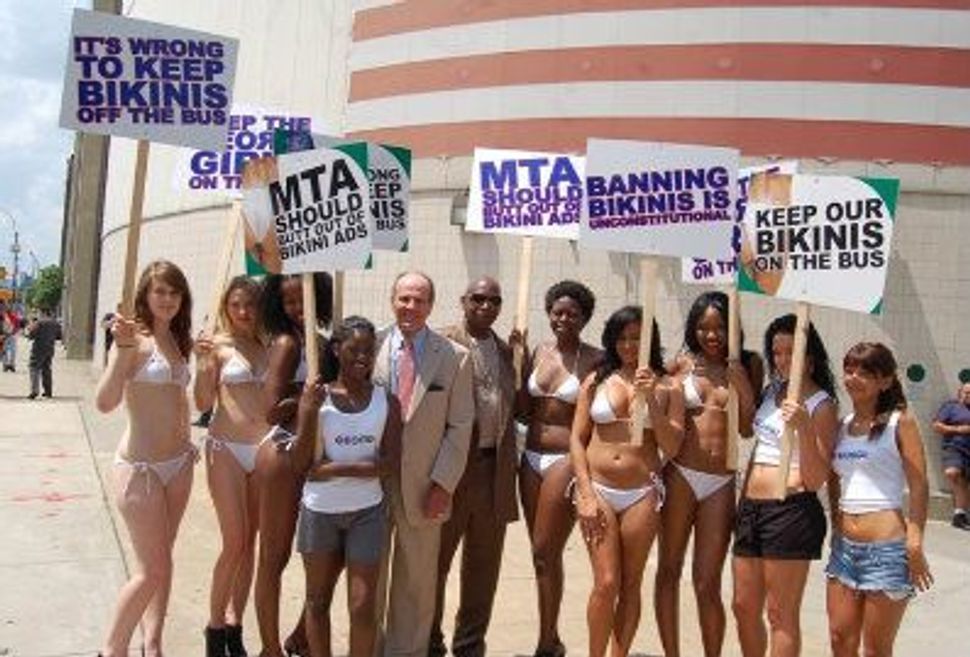 Is a bikini-clad bum offensive? Does a clothed booty constitute an “inappropriate” image?

Probably not in hip-hop videos, vacation ads or swimwear promotions. But on the side of a New York City Transit bus that travels through heavily Orthodox Jewish neighborhoods, it’s a different story, a crusading rabbi says. And the Metropolitan Transportation Authority seems to agree.

The derriere dispute flared when the MTA banned a popular ad for Georgi Vodka featuring scantily clad models. “The ads show the back side of a woman dressed only in a bikini bottom and a woman sitting in the sand with her arms around her knees,” according to the NY Daily News.

The sexy images didn’t sit — ahem — that well with “Hasidic community members,” the News reports. Rabbi Shea Hecht, who heads the National Committee for the Furtherance of Jewish Education, told Fox News he has “great respect for the First Amendment, but believes he also has a right to travel through his neighborhood with his children and not be offended.”

The MTA subsequently pulled the ads from buses leaving Flatbush, Ulmer Park and Jackie Gleason depots in Brooklyn, according to a spokesperson.

But Martin Silver, owner of Georgi Vodka producer Star Industries, rebutted that notion. These ads are clearly not pornography. … If you don’t like what’s on a bus, all you have to do is look away and walk past,” he told the Daily News.

The ads are banned for now. In the meantime, Georgi Vodka’s PR people have been working overtime. When Silver spoke to the Daily News, he “was flanked by several models hired to wear white bikinis with ‘GEORGI’ stamped across the bum and hold signs that read, ‘MTA should butt out of bikini ads.’”

The news comes on the heels of Philologos’ report in last week’s Forward of the New York Times controversy over Jeffrey Goldberg’s use of the word “tuchus”.