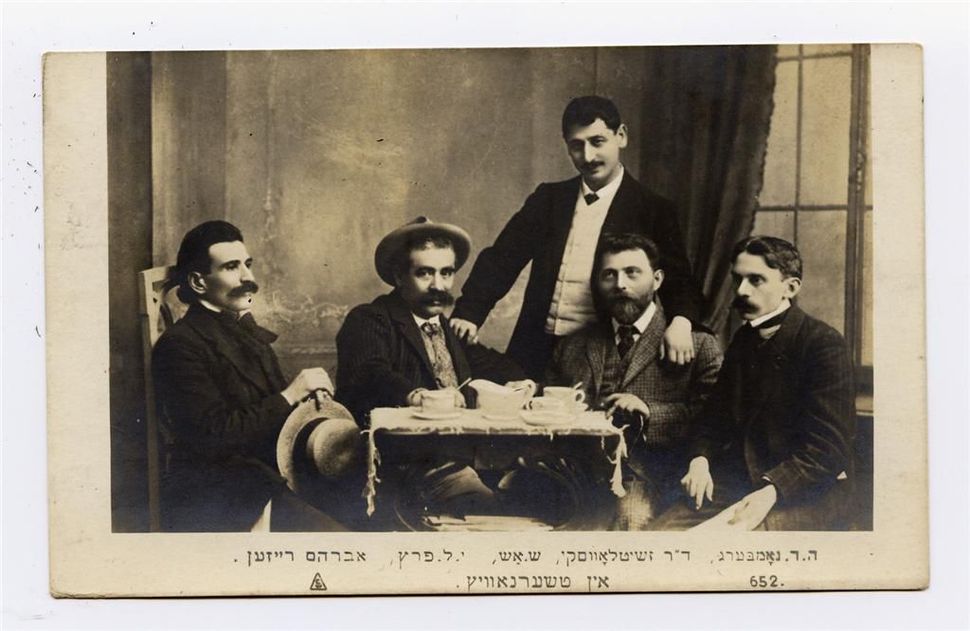 The far-flung commemorations of the centenary of the 1908 Yiddish language conference in Czernowitz, including a conference in December, 2009 at the Hebrew University in Jerusalem, continue to have repercussions today. The recent essay collection from Lexington Books, “Czernowitz at 100: The First Yiddish Language Conference in Historical Perspective” edited by Joshua Fogel and Kalman Weiser, both of York University in Toronto, is one example.

The product of an academic conference, “Czernowitz at 100,” the book features a flavorful evocation by Mordkhe Schaechter of a 1908 speech by Yiddishist Mates Mieses, which was greeted by angry shouts and weeping from Hebraists. Mieses reminded those who dismissed Yiddish as a mere jargon that Dante Alighieri himself apologized for writing his Divina Commedia in the “mob’s depraved jargon” — Italian — instead of Latin.

Another chapter features a charming reminiscence by the grandson of Nathan Birnbaum of his father Solomon Birnbaum, who at age 94 was given an honorary degree by the University of Trier for his Yiddish scholarship. The effect of Czernowitz on the noted Polish Jewish painter Maurycy Minkowski and Israeli novelist Aharon Appelfeld are also addressed, as is I. L. Peretz’s key role in the conference itself, aimed at hoisting Yiddish to the “rank of a European literature.”

Belated recognition and dim memories of hysteria apart, Czernowitz has also inspired a new book from the University of California Press, “Ghosts of Home: The Afterlife of Czernowitz in Jewish Memory” by Marianne Hirsch of Columbia University and Leo Spitzer of Dartmouth. “Ghosts of Home” is part-history and part-personalized travelogue recounting in loving, often mournful detail the tragic destiny of Central European Jewry.

Paul Celan’s evocation of Czernowitz as a place where “human beings and books used to live” is quoted, and some pages are naturally devoted to the 1908 conference. Among many other historical ironies, “Ghosts of Home” states that over a century ago, Czernowitz was seen as “Jewish friendly” because it had a “Jewish mayor on several occasions” and even sent a Jewish representative to the Austro-Hungarian Imperial Council (Reichsrat).

Hirsch and Spitzer also allude to Peretz’s starring role at the Conference, since Sholom Aleichem was too ill to attend, and Mendele Mocher Seforim did not even bother to reply to the invitation. Even though the mighty Hebraist Ahad Ha’am mocked the 1908 gathering as a “Purim-shpil,” clearly its compelling influence still resounds in the memory of Yiddishkeit.

Watch a trailer for “Glimpses of Yiddish Czernowitz“ from the Forverts video channel: