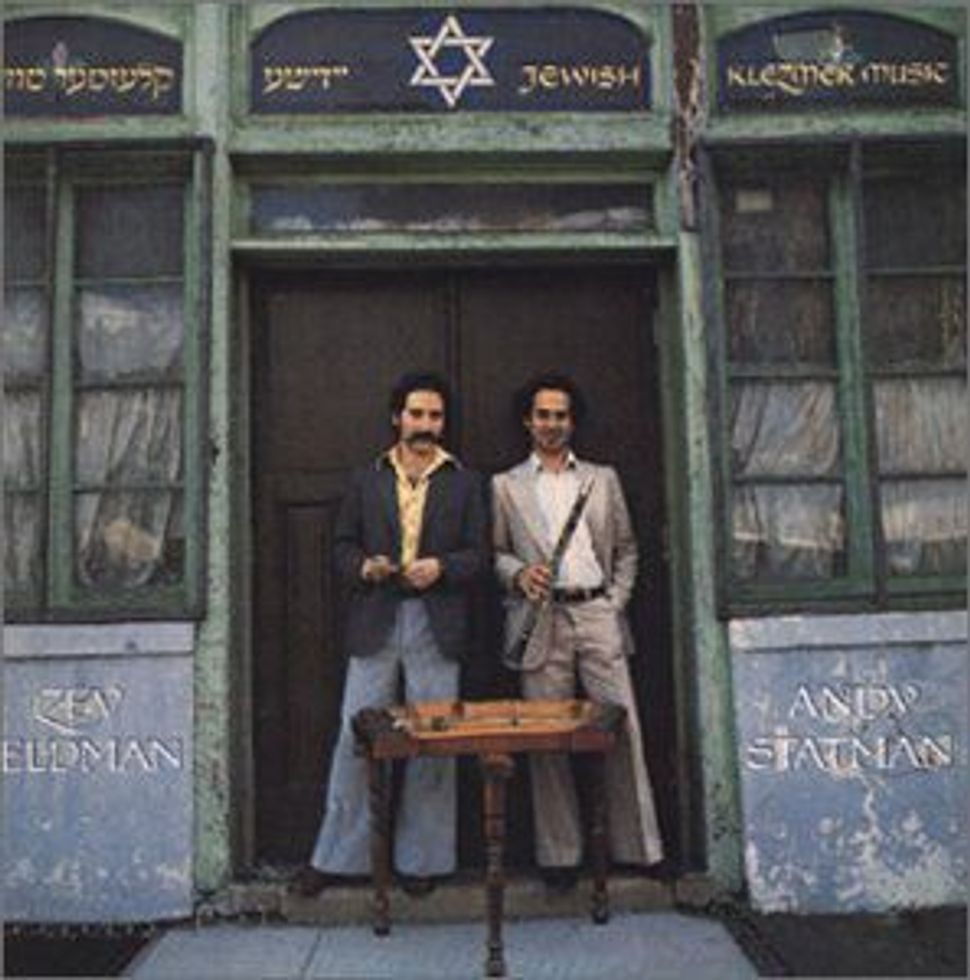 Zev Feldman and Andy Statman on the cover of their 1977 album, ?Jewish Klezmer Music.?

Raphaël Sigal, scholar and music aficionado, worked for the past four years along with his two friends Mathias Dreyfuss and Gabriel Siancas to bring the history and life of the movement to French audiences. Sigal studied comparative and Yiddish literature at the Sorbonne, taught French in Israeli universities, and is currently pursing his doctorate in French literature at New York University. The Arty Semite contributor Jake Marmer asked him about how you can have a musical exhibit in a museum, what it means to display a still-living culture, and the differences between French and American Jewry.

Jake Marmer: What was the impetus of putting together the Radical Jewish Culture exhibit in Paris?

Raphaël Sigal: Being great fans of many of the RJC projects, we — Mathias Dreyfuss, Gabriel Siancas and I — started mentioning some four years ago that it could be great to organize at the museum some concerts that could be accompanied by a very small informative exhibition. Slowly, the people in charge at the museum grew convinced that it would be a good idea and asked us to put together a real project. Finally, the museum decided to do a large exhibition plus a festival and gave us more tools in order to achieve it. This is when we started contacting the various actors of the projects, starting with Zorn, and then Anthony Coleman, Marc Ribot, Elliott Sharp, Ben Goldberg, Frank London, David Krakauer and others.

Given that Radical Jewish Culture is almost exclusively focused on music, how were you able to represent the movement within a museum setting?

That was indeed one of the challenges of the exhibition. We needed to maintain as forcefully as possible the music as the core of the exhibition along exhibiting visual documents. We actually spent two years gathering objects by the musicians: photos, scores, ephemera, small objects, faxes, LPs, notebooks… We also selected a few artworks that were used by the musicians as references or illustrations as well as photographs. The idea was to put the music in context: to exhibit it as the result of a complex process of creation involving musical cultural, historical & religious references, as well as interpersonal relations.

Zorn warned us from the very beginning that RJC is not a movement, but a body of projects: it is in other words a pure dialectics…The only satisfying way to build our exhibition turned out to be an organization along various themes that would be as many windows on the very complicated object that RJC is.

What is it about the Radical Jewish culture that you, as French scholars and curators, can see that American Jewish audiences may not?

We certainly don’t see ourselves as scholars, and it was also very difficult to cope with the idea of being curators, for it was for the three of us the first exhibition. We were basically enlightened listeners of RJC that decided to join forces.

Being French helped us to view what would appear to American Jews as normal. American Jewry is quite far from the French one: a lot more diverse and entangled. So we had access to a certain level of readability. American Jews are quite ‘unheimlich’ to us. The frames are more or less the same, but the ways of going along with it or subverting it are very different. We had a sharp consciousness of this distance the whole time while doing our project. That could be the best answer: we saw a distance that American Jews may not see.

To many American fans of Radical Jewish Culture, the idea of exhibiting this still-growing, still-living culture in the museum seems counter-intuitive. What were your thoughts on the subject? What were Zorn’s?

First and foremost, the three of us are definitely part of the fans’ cohort… This is an essential part of the story: without our passion for the music, nothing would have happened. The exhibition was built through a dialog with the musicians, through e-mailing and talking, going to concerts and eating at restaurants. And again we were in this ‘I need not say anything. Merely show’ obsession: we did not want to superimpose our own story on the RJC, but remain as discreet as possible through the montage, which is ultimately the tool we had as curators.

Zorn had very complicated feelings about the exhibition, for all the musicians are still very active. Of course the lack of distance in time was a complicated parameter to cope with. Somehow, we had the geographical/cultural/historical distance to replace the time distance. It is quite important to reflect upon the fact that the exhibition was made in Paris, to the destination of non-American Jewish audience to which we wanted to convey both our love and our interest for the music and the processes that led to it.

What surprised you the most as you were putting together the exhibit?

The more we dug in the subject, the more it became complicated: new directions, references, problems, books to read, people to look at, etc. It is quite amazing how RJC is at the center of so many things. When you look at the number of projects and at the number of references within the projects, it is really an exponential thing. So what surprised us the most was the amount of things we discovered while doing the exhibition, and realizing that everything we liked about American culture showed up during the process of putting together the exhibition. What started in our minds as a will to see some good concerts in Paris turned to be thoroughly consistent exhibition subject: that is quite surprising in itself.