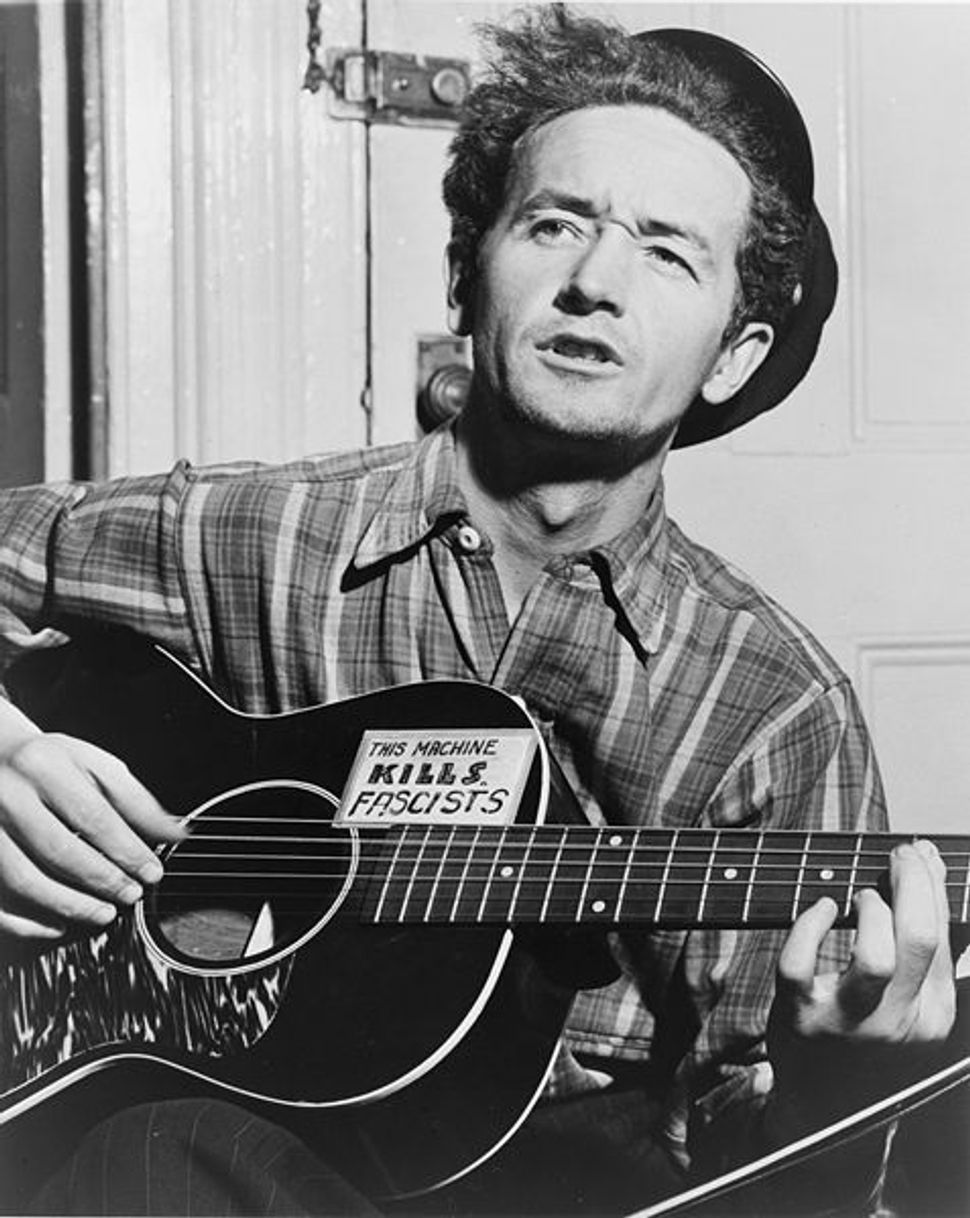 “The politics these days are the worst I’ve ever seen,” lamented Robert Kaplan of the Workmen’s Circle/Arbeter Ring. He was introducing The Klezmatics before they hit the stage at Lincoln Center’s Damrosch Park Bandshell on August 3 for the second show in the Music For a Better World series, which culminates on August 15 with the “Klezmer to Rock Street Party” at the Madison Avenue Summer Fair.

After talking about health insurance and alluding to the Ground Zero Mosque controversy, Kaplan urged the audience to “break the pattern of ‘me-ism’” in this country in order to bring forth a “bessere velt” (“better world”). One could forgive him for offering such an overtly political introduction. The Klezmatics, after all, were about to perform original material from their Grammy Award-winning 2006 album “Wonder Wheel” (reviewed here by Forward columnist Jay Michaelson), which is set to lyrics by Woody Guthrie, perhaps the most famous protest musician in American History.

Paying tribute to Guthrie has been a right of passage for many folk musicians. Bob Dylan worshipped him and British folkster Billy Bragg famously teamed up with the American rock band Wilco to record an album featuring Guthrie’s lyrics. So The Klezmatics aren’t exactly breaking new ground. Instead, they use Guthrie as a vehicle to explore different genres without the gimmickry which plagues so many “tribute” endeavors.

Many of their Woody-inspired compositions seem to take their cues from Appalachia and Alison Krauss, rather than, say, Bessarabia and Naftule Brandwein. “Gonna Get Through This World,” which featured the Celtic singer Susan McKeown on lead vocals, is set to a haunting minor harmony and imparts a somber urgency to a song whose lyrics are considerably cheerier. Interestingly, the band threw in a nigun halfway through the song, which sounded a lot less foreign than one would imagine.

“Holy Ground,” ostensibly a pro-conservation rallying call set to the story of the Burning Bush, is in the style of traditional American sacred choral music, with simple yet superb three chord harmonies. “Mermaid’s Avenue,” in the style of a Caribbean flavored pop tune, does justice to Guthrie’s account of his years spent on Coney Island (“where the halvah meets the pickle, where the sour meets the sweet”) and “Wheel of Life,” perhaps the most ambitious Guthrie song performed, was a trippy and dizzyingly arrhythmic trance, beginning with a Middle Eastern doina and featuring some acrobatic krekhts from violinist Lisa Gutkin. The Klezmatics were joined onstage for the first few numbers by the Community Chorus of the Boston Workmen’s Circle, which added to the general majesty of the evening without taking away from the band’s fire.

There’s an element of comedy in The Klezmatics eclectic style of performance. Frank London, the band’s trumpet player, nodded to Guthrie’s hyperbolic conceptions of morality and politics when he asked the audience to “sing with us against fascism.” Later in the evening, the band broke out into some Guthrie-penned Hanukkah songs — why not? — from their 2006 “Woody Guthrie’s Happy Joyous Hanukkah” album, whose target audience seems to be very precocious Jewish children.

The band reverted to their traditional jazz-inflected klezmer style for the last few numbers, several of them instrumental and improvisational pieces, which was really a treat for the technical heads in the audience. It’s easy to forget the virtuosic ability of someone like London, whose style is much more reserved on the Guthrie songs.

At the very end of the encore, members of the group subtly teased the melody from “Ale Brider,” an old Yiddish folksong that became an unofficial anthem at Bund halls throughout Eastern Europe. With its youthful message of universal brotherhood it’s a bit silly and a little too wholesome, but sincere nonetheless. Woody would have appreciated it.