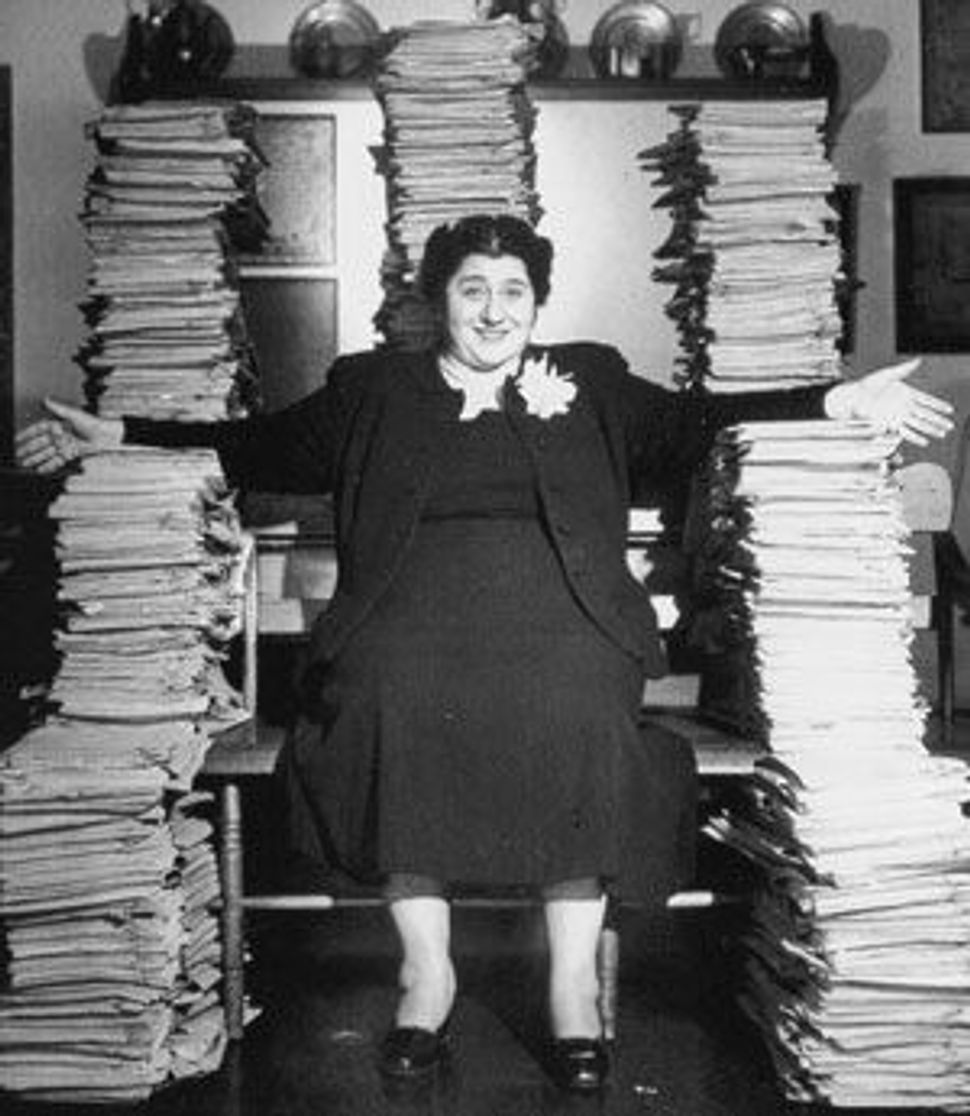 As the head writer, producer and leading actress of the radio show “The Rise of the Goldbergs” and the subsequent sitcom, “The Goldbergs,” Berg pioneered the vocabulary of the modern television comedy show: the squabbling but loving couple and their scrappy, curious youngsters; the nosy neighbors; and the well-meaning but somewhat befuddled uncle.

Above all, the Goldbergs had the indomitable, gossiping, malapropism-spewing matriarch Molly Goldberg, Berg’s singular creation. Molly Goldberg was once a household name, and Berg a media queen on par with Martha Stewart. Today, she and her creator have fallen into television marginalia. Last year, director Aviva Kempner took steps to revive the Goldberg legacy with her documentary “Yoo-Hoo Mrs. Goldberg,” released on DVD August 24.

Kempner’s film traces Berg (née Tilly Edelstein) and her fictional family from its origins as a series of childhood sketches Berg developed for her father’s guests at the Edelstein’s hotel in the Catskills, on to radio fame, and finally crossing over to television in 1949. In their radio days, the Goldbergs were second only to Amos ’n’ Andy in popularity, and became one of the earliest successful sitcoms on television.

As a family, the Goldbergs got into snafus and dealt with the mishaps of the children, Rosalie and Sammy, and the doddering of Uncle David. But most importantly, they represented a quintessential American family: not the clean-scrubbed nuclear home of the Cleavers, but the bustling immigrant household, staked firmly in America but with traditions stretching back to the old country.

Kempner’s film emphasizes Berg’s efforts to present a positive amalgam of the Jewish mother. Molly Goldberg, complete with accent, is a combination of all the Jewish aunts and grandmothers and neighbors Berg had encountered on the streets, and a step away from the bescarved yentes that had previously dominated the portrayal of Jewish women.

Berg worked to show the integration of the American lifestyle and Jewish customs on the show, once bringing a rabbi on the air to give a Passover service as part of the program. And she didn’t back down in the face of anti-Semitism: When Phillip Loeb, the actor who played Molly’s husband, was blacklisted, Berg fought ferociously to keep him on the show, even when it meant a year-long cancellation of the program.

“Yoo-Hoo, Mrs. Goldberg” collects interviews from the cast and their relatives, interspersing Berg’s biography with snippets of footage and radio reel. The narrative arc is scattered and repetitive, however, and too often you find yourself asking who that interview is with and why, exactly, we need to hear again about how the Goldbergs’ move to the suburbs was jumping the shark.

Nonetheless, Kempner’s attention to the career of a close-to-forgotten 1950’s icon convinced the UCLA Archives to release a four volume box-set of the series, which takes you with the Goldbergs from their early days on radio to their suburban rest. Molly Goldberg and her family are charming and funny; much of the show stands up after 50 years as excellent and well-written television. And for the re-discovery of Mrs. Berg and Mrs. Goldberg, we have Kempner to thank.

Read a post about Gertrude Berg on The Sisterhood here.